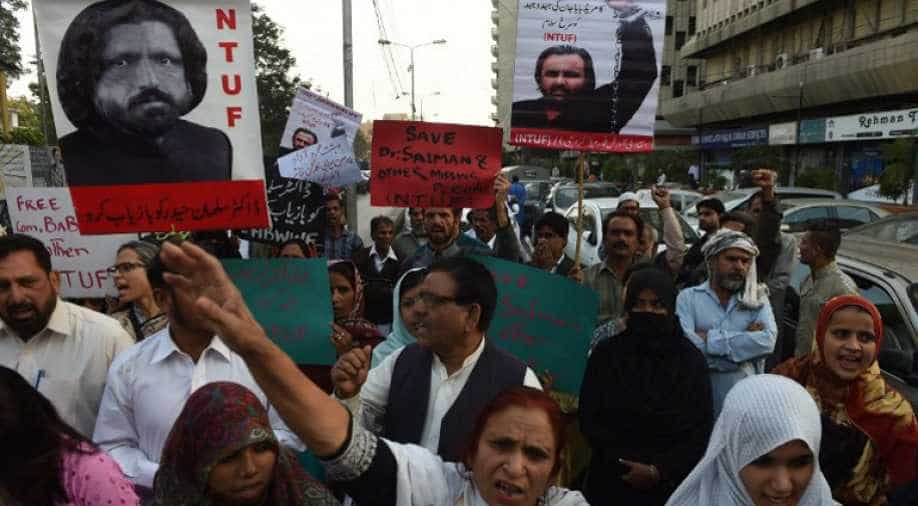 No group has claimed responsibility and the whereabouts of the other three are still unknown. In photo: Pakistani human rights activists hold images of missing activist Salman Haider during a protest on January 9, 2017. Photograph:( AFP )

More than two weeks after they disappeared, two Pakistani activists have announced themselves safe to their families, The Dawn reported on Saturday.

Salman Haider and Ahmed Raza Naseer's disappearance along with three others earlier this month had sparked protests and fears of a government crackdown.

“Salman has been in contact with the family. He is safe and in good health,” his brother Zeeshan Haider told Dawn.

The days the activist were missing "were the most painful period in my life," the relative told AFP, adding the returned blogger was now "in (a) safe place for some days".

“He (Naseer) told us there was nothing to worry about, but said that he could not come home yet,” his brother, Tahir, told Dawn.

The five men ? who campaigned for human rights and religious freedom ? went missing from various cities between January 4 and 7, triggering nationwide protests. The interior minister had vowed to ensure the activists' safety.

There is no information about the whereabouts of three others. No group claimed responsibility for their disappearance. The families of the activists were harassed through campaign on social media that attempted to malign their names.

Human Rights Watch and other rights groups said their near simultaneous disappearances raised concerns of government involvement, which officials and intelligence sources have denied, AFP said.

Earlier this month Shaan Taheer, son of Punjab governor Salman Taseer who was killed five years ago, received death threats after he posted a Facebook video asking for people to pray for those charged under Pakistan's blasphemy laws.

Pakistan charged more than 200 people under blasphemy laws in 2015, many of them minorities. The charge is hugely sensitive in deeply conservative Muslim Pakistan, where even unproven allegations have stirred mob lynchings and murder, according to AFP.