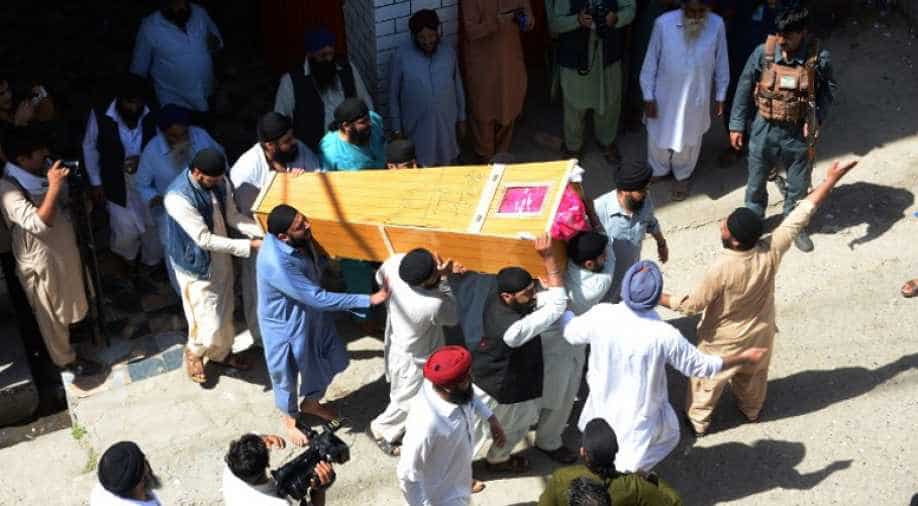 Afghan Sikhs carry the coffin of one of the 19 victims of a suicide attack in Jalalabad. Photograph:(AFP)
Follow Us

The IS was not part of the Afghanistan government's 18-day ceasefire with the Taliban.

The Islamic State(IS) group has claimed responsibility for the attack which killed 19 people mostly Sikhs and Hindus in Jalalabad on Sunday.

The IS was not part of the Afghanistan government's 18-day ceasefire with the Taliban that expired last Friday.

At least 17 Sikhs were among those killed in the suicide attack in Afghanistan's eastern city. On Monday, mourners carried out the funeral for all those who had passed away in the attack, among those killed was Avtar Singh, an Afghan Sikh politician.

"This attack has killed many of our elders, those who loved their country more than anything else," Narendar Singh told AFP as he took the body of his father, Avtar Singh, from the hospital.

The group of Sikhs and Hindus were attacked as they were preparing to meet President Ashraf Ghani who was in the city&nbspas part of a two-day visit to the province.

As the morning meeting was postponed, the group decided to meet the president later in the afternoon when a suicide bomber in a car pulled near the crowd and as the authorities ordered the man's car to be checked, he blew himself up.