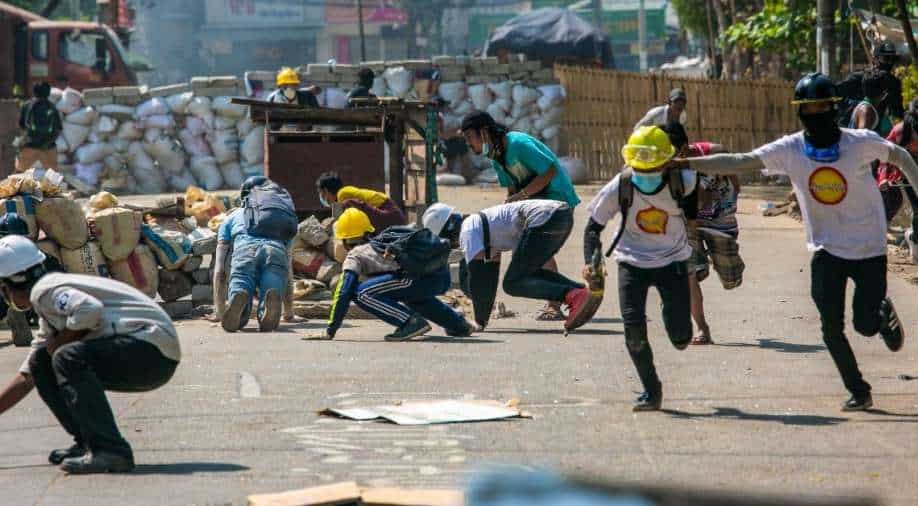 The chaos in Myanmar Photograph:( Reuters )

The military has justified its takeover by claiming electoral fraud in elections last November that were won by Suu Kyi's party in a landslide. But it has faced international condemnation for the coup and subsequent bloody crackdown, with the US and Britain hitting the junta with sanctions.

Opponents of Myanmar's coup planned more protests on Saturday as international pressure on the military junta to halt its repression of pro-democracy supporters increased.

A young man was shot and killed in one of the most turbulent neighbourhoods of the main city of Yangon on Saturday, a resident and media reported, taking the death toll since the February 1 coup to 238, according to a tally by the Assistance Association for Political Prisoners activist group.

Also, more than 2,000 people have been detained, according to a local monitoring group.

The bloodshed has not quelled the anger over the ouster of the elected government and the detention of its leader, Aung San Suu Kyi, though some protest organisers say they have to adapt their tactics.

Myanmar has been in turmoil since the military ousted civilian leader, triggering a mass uprising that security forces have sought to crush with a campaign of violence and fear.

The military has justified its takeover by claiming electoral fraud in elections last November that were won by Suu Kyi's party in a landslide. But it has faced international condemnation for the coup and subsequent bloody crackdown, with the US and Britain hitting the junta with sanctions.

EU foreign ministers are on Monday set to approve sanctions on 11 Myanmar junta officials. The move comes after the 27-nation bloc last month agreed to target Myanmar's military and its economic interests over its seizure of power.

One diplomat said the 11 individuals to be placed on an EU assets freeze and visa ban blacklist by ministers meeting in Brussels are military and police officers.

UN Secretary-General Antonio Guterres on Friday condemned what he denounced as the military's continuing brutal violence. A "firm, unified international response" was urgently needed, his spokesman quoted him as saying.

UN rapporteur Tom Andrews called for sanctions to what he called the generals' ruthless attacks on the people.

"The world must respond by cutting their access to money and weapons. Now," he wrote on Twitter.

The US House of Representatives approved legislation condemning the coup and lawmakers decried the increasingly harsh tactics against the demonstrators.

Authorities have tightened restrictions on internet services, making information increasingly difficult to verify, and clamped down on private media.

Ambassadors of Western countries condemned the violence as "immoral and indefensible", in the Hlaing Tharyar industrial district of the commercial capital Yangon, where dozens were killed over several days after Chinese-owned garment factories were torched last weekend.

"Internet blackouts and suppression of the media will not hide the military's abhorrent actions," they said in a statement on Friday.

Asian neighbours have also been speaking out to urge an end to the violence.

Indonesian President Joko Widodo, in some of the strongest comments yet by a regional leader, said he would ask Brunei's Sultan Hassanal Bolkiah, the chairman of the Association of Southeast Asian Nations (ASEAN), to call an urgent meeting.

"Indonesia urges that the use of violence in Myanmar be stopped immediately so that there are no more victims," Jokowi said in a virtual address. "The safety and welfare of the people must be the top priority."

Backing Indonesia's call for a meeting, Malaysian Prime Minister Muhyiddin Yassin said he was appalled by the persistent use of lethal violence against unarmed civilians.

Singapore has also spoken out against the violence and the coup that triggered it, calling for the release of Suu Kyi.

But the military has shown no sign of being swayed. Suu Kyi, who has campaigned for democracy in Myanmar for three decades, is now being held at an undisclosed location.