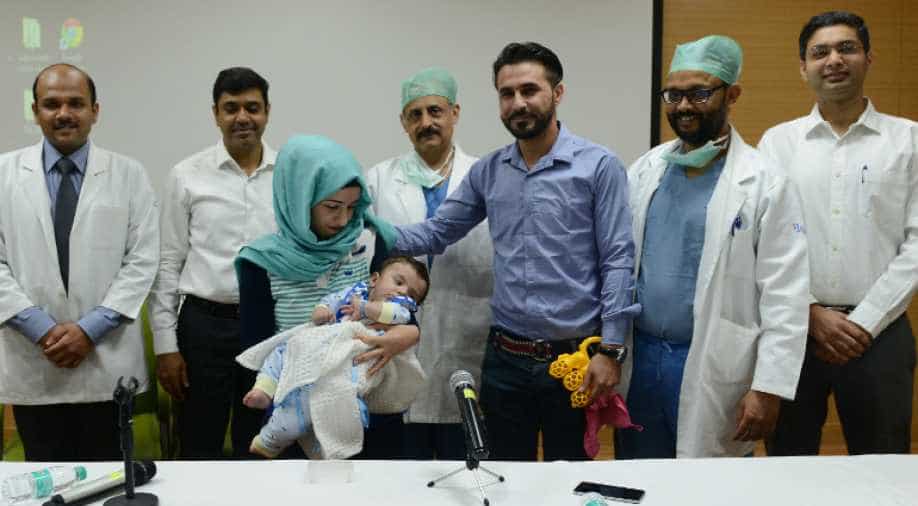 Sarwed Ahmed Nadar, Gufran Ali and their seven-month-old son Karam with the team of doctors who operated Karam. Photograph:( AFP )

For 28-year-old Sarwed Ahmed Nadar, a doctor from Bagdhad, the journey to a hospital in India with his seven-month-old son Karam has been difficult. But as he and his wife Gufran Ali stand with a team of doctors who have just successfully performed a complicated surgery on Karam, theirs is a story of hope.

Karam was born with eight limbs.

Suffering from a disease called Polymelia, he had four extra limbs, apart from his legs, protruding out of his stomach.

“I was shocked when I first saw him. I had never heard of something like this,” Nadar says.

No other doctor in Iraq had heard of the condition either, let alone prescribing a treatment for it. “I sought the opinion of several doctors. They had never seen such a case. In fact, after researching on the internet I found out that there are only five or six such cases in the world that have been reported,” he says.

Moreover, conflict in Iraq has made medical facilities in the country scarce. Nadar says the medical aid from the Iraqi government is limited.

“The war with the Islamic State in Iraq has taken away a lot of the government resources. The government is busy with the war and cannot provide for our medical requirements. There are always more patients and limited facilities. Not all medical facilities are available in my country, especially when it comes anaesthesia, which is important for such complicated surgeries,” he says.

This was what prompted Nadar to seek help from outside his country. He contacted doctors from different countries and sent them Karam’s reports in emails.

“I tried many countries but the cost was high. India was cheaper. There were multiple surgeries that had to be performed and India had good medical facilities too,” he says.

Nadar and Gufran then zeroed in on a hospital in Noida. But the road ahead was only going to get tougher. He knew travelling back and forth from Baghdad to New Delhi was going to be physically, mentally and financially draining.

After corresponding with the doctors in the hospital over a series of emails. The couple flew to India. But the case left even the doctors in India baffled.

“The case was very overwhelming. What you see is a child with eight limbs. It suddenly distracts you from something more pressing which could be life-threatening and in this case it was his heart. He had a major problem with the heart,” says Dr Gaurav Rathore, one of the five doctors who performed the surgery.

The surgery was done in three stages.

In the first, Karam’s clubfoot was treated and the two limbs protruding from his stomach were removed. The family then went back to Iraq and stayed in touch with the doctors over phone and email for important instructions.

In the second stage, a heart surgery was performed so that his left ventricle could control his body’s blood circulation after the treatment.

In the final stage, the other two limbs were removed from his body, leaving Karam with two legs.

One of his legs was weaker and so the muscles from the removed limbs were transplanted to his underdeveloped leg. Along with this, Karam’s crooked back was also treated.

Pictures of Karam before and after the surgery.(Photo courtesy: Jaypee Hospital) (WION)

Both of Karam's limbs, which were protruding out of the stomach, were connected through his the breastbone. His blood veins were also adjoined to his liver veins. With a complex microscopic technique these veins were separated and then the remaining extra limbs were removed from his body. Then with the help of plastic, aesthetic and reconstruction technique his stomach was given a normal shape.

Karam was only two weeks old when the first surgery was performed on him. Today, he has two hands and two legs like any other normal child. There are, however, more surgeries to be performed over the course of the next few years and the family is preparing for that.

Doctors say Karam might have had a conjoined twin that fused with him in the early stages of pregnancy, but couldn't develop.

Nadar and the doctors have been unable to find out why Karam suffered from Polymelia, but they all agree in the possibility of it being an effect of radiation and exposure to toxic weapons.

“It is very difficult to say what would be the exact reason but we know that this condition happens due to some problem in the early art of the pregnancy. This could very well be an environmental factor. But we won’t be able to lay a finger on it. This child is from a war zone. They use a lot of radiation, depleted uranium, et cetera. So that could have caused this,” Dr Rathore says.

Gufran with Karam at the hospital. (AFP)

Nadar has seen several other children suffering from anomalies in Iraq.

“We are exposed to a lot of weapons  Many babies are born with anomalies either in the heart or the legs, most likely because of radiation which contaminates food and water,” Nadar says.

Rathore says it could also have been caused by a virus or some form of chemical to which Gufran was exposed.

Medical tourism is fast becoming a booming sector in India, and a huge number of patients come from conflict-torn countries.

“We have a lot of patients coming in from Afghanistan, Iraq and many African countries like Somalia. These countries are not able to keep up with the medical advancements due to their internal tensions,” Dr Rathore says. “Earlier they would go to the western countries for treatment, but now that the Indian medical setup is at par with anywhere else in the world and much cheaper and also has a great pool of surgical talent, they seek their medical answers in India.”

He says a surgery like Karam’s would have cost four to eight times more anywhere else. It's probably impossible to express how grateful Karam's parents are to these doctors in India who saved their child.

After months of struggle the couple is finally returning home with a recovering Karam. They say there were days when they were stressed, but Karam kept them from breaking down.

“Coping up with the initial shock was easy for me. We have been living in the midst of tragedies for a long time. Our son’s birth was a glint of happiness amid the doom around and all we want now is a healthy life for him. And we are looking forward to it,” Gufran says.