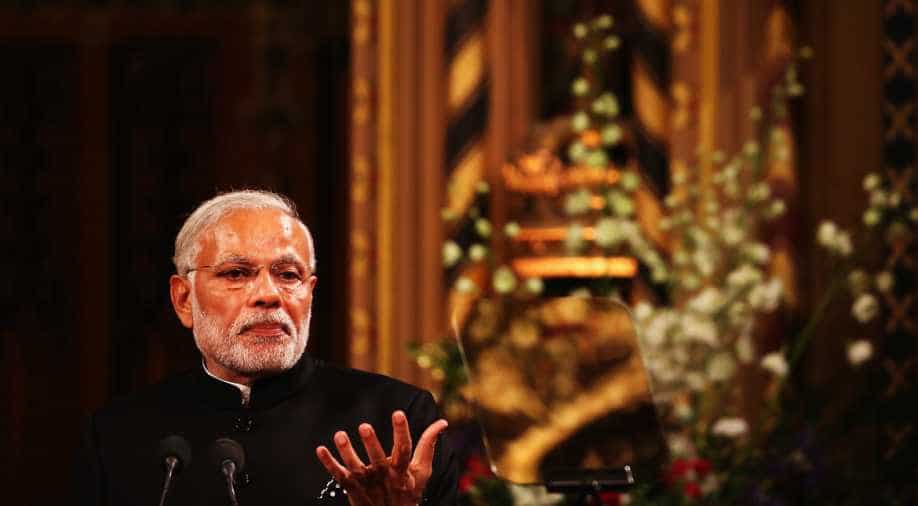 'Silence and inaction against terrorism in Afghanistan and our region will only embolden terrorists and their masters,' Modi said. Photograph:( Getty )

Indian Prime Minister Narendra Modi on Sunday called for "resolute action" against terrorism in the region.

In his address at the 6th conference of Heart of Asia, he also urged on the importance of taking strict action against those who support, shelter, train and finance them.

"Terrorism and externally-induced instability pose the gravest threat to Afghanistan's peace, stability and prosperity. And, the growing arc of terrorist violence endangers our entire region. As such, support for voices of peace in Afghanistan alone is not enough.

"It must be backed by resolute action. Not just against forces of terrorism, but also against those who support, shelter, train and finance them," the prime minister said.

He was speaking after jointly inaugurating the annual ministerial conference here along with Afghan President Ashraf Ghani which is being attended by Pakistan Prime Minister Foreign Affairs Adviser Sartaj Aziz along with representatives of around 30 countries.

"Silence and inaction against terrorism in Afghanistan and our region will only embolden terrorists and their masters. Third, our bilateral and regional commitments of material assistance for Afghanistan's development and humanitarian needs must continue and increase," Modi said.

Modi said there was a need to demonstrate strong and collective will to defeat terror networks that cause bloodshed and spread fear.

Expressing India's strong commitment to Afghanistan's transition, Modi said, "On India's part, our commitment to our brave Afghan brothers and sisters is absolute and unwavering. The welfare of Afghanistan and its people is close to our hearts and minds."

He also called for an Afghan-led, Afghan-owned and Afghan-controlled peace process to bring stability to the country.

Calling for sustained and sincere global efforts to bring "durable peace and lasting political stability" to Afghanistan, Modi said securing its territory and citizens from external threats must be a focus area for the "critical unfinished mission of our time".

"We have no doubt about the scale of the challenge. But, we are equally determined to succeed," he said, adding the results of collective efforts thus far have been hard-won, but mixed.

Modi said there was a need to reflect with urgency on what more must be done and what must be avoided in Afghanistan so that its citizens can self-sustain peace and economic growth.

"The question is of resolve and action. And, of putting Afghanistan and its people first. For this, First, an Afghan-led, Afghan-owned and Afghan-controlled process is key. It is the only guarantor of durability of solutions.

"Second, we must demonstrate strong collective will to defeat terror networks that cause bloodshed and spread fear," he said.

Noting that all those involved in Afghanistan's transition must build on the gains of the last 15 years, he said what was at stake is not just the future of Afghanistan that has invested in a vision of development, democracy, and pluralism but the the peace and stability of the entire region, and beyond.

Pitching for improving connectivity between Afghanistan and countries of the region, the prime minister said Afghanistan should be at the centre of our connectivity networks, not peripheral to them.

"On our part, we see Afghanistan as the hub for strengthening links of connectivity between South Asia and Central Asia.

"We cannot deny that the more connected Afghanistan is with the regional arteries of trade, capital and markets, the more assured would be its economic growth and progress. President Ghani and I have converged on the priority of strengthening trade and transport linkages with other partners in the region," he said.

Talking about significance of hosting the Heart of Asia Conference in Amritsar, Modi said the flow of trade, people and ideas through the region has often intersected in the holy city on one of Asia's oldest and longest surface arteries, the Grand Trunk Road.

"Amritsar reinforces the value of restoring connectivity which is so crucial for the overall growth, stability and economic prosperity of Afghanistan," he said, while describing the city as an embodiment of peace and humanism as well as a symbol of great valour and sacrifice.

Talking about Amritsar's link with Afghanistan, he said among the the earliest disciples of the first Guru of Sikhs, Baba Guru Nanak Dev ji, were Afghans he had preached in Kabul in the 15th century.