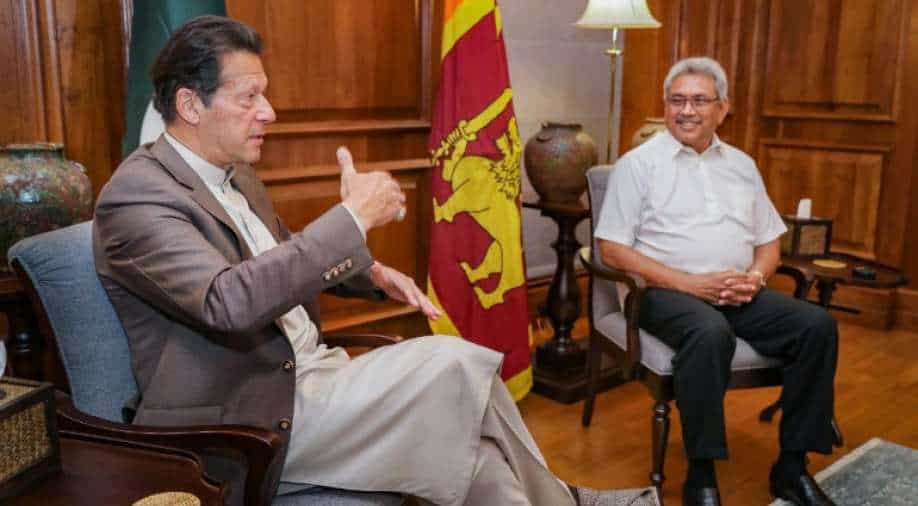 Knowing Khan would bring up Kashmir, Sri Lanka cancelled Khan's address to Parliament. Undeterred, he used a trade conference to talk about Kashmir

Imran Khan is on a two-day visit to Sri Lanka. His first visit to the island nation since becoming prime minister. On day one, they focused on boosting bilateral relations, expanding trade ties and attracting more investments but as the day ended, it became amply clear that Khan only wanted a new platform to push his anti-India agenda. Alongside, he also did some good PR for Pakistan's iron-brother China.

Imran Khan reached the residence of Sri Lankan prime minister Mahinda Rajapaksa for dinner. A lavish banquet was held at Temple Trees. Imran Khan was visibly delighted with the reception. It followed one-on-one meetings and delegation-level-talks. Finally, a joint press briefing by the two prime ministers was held.

Imran Khan started by talking about inequality and why organisations like the United Nations need to look after countries that have been severely hit by the coronavirus.

Day one was about pleading for help and day two was about pushing propaganda for both Pakistan and China. Imran Khan attended a trade and investment conference and he admired China's rise. How China is helping Pakistan rise? He even invited Sri Lanka to join China Pakistan Economic Corridor (CPEC). Then, it was the turn of Kashmir.

Knowing Khan would bring up Kashmir, Sri Lanka cancelled Khan's address to Parliament. Undeterred, he used a trade conference to talk about Kashmir. "My dream for the subcontinent is that we resolve our differences and our differences is only one, it’s the Kashmir issue. All we want is to resolve according to the UNSC resolution and this can only be resolved through dialogue," said Imran Khan, prime minister, Pakistan.

'Solve it through dialogue' is being said by the prime minister of a country that pursues terror as state policy. A country that pushes terrorists into the Kashmir valley.

Imran Khan should have instead raised the issue of forced cremations in Sri Lanka. Muslims and Christians, who died due to the coronavirus are being denied burials under Sri Lanka's new policy.

Every deceased man or woman, irrespective of their religion has to be cremated. The Islamic world is appalled at this as they are calling it an extension of Sri Lanka's persecution of Muslims. Imran Khan, who calls himself a leader of the Muslim world, chose to remain silent on it. Just like he does on the Uighur issue with China.

But he ignored it. Khan is looking forward to boost bilateral ties and the only point where he chose to embarrass his hosts was when he raised Kashmir.

Colombo must have prevailed later, because there was no mention of Kashmir in the joint statement as India is watching closely. It's an old relationship.

Pakistan is Sri Lanka's biggest trading partner in the region after India.

Pakistan is also trying to use its ancient Buddhist connections to promote cultural ties with Sri Lanka but the bedrock of this relationship is defence. Over the past three decades, Colombo has relied on Islamabad for military supplies. Lankan soldiers train in Pakistan.

Earlier this month, Sri Lanka also participated in Pakistan's multi-naval exercise, curiously named Aman,  meaning peace, and of course, there's the old link of the president, Gotabaya Rajapaksa. As a young army officer in the 1970s, he went to Pakistan for an officers training course.

There's history, there's diplomacy, there's common interests and there's a common creditor in China to bind Sri Lanka and Pakistan. With the Rajapaksas in power, Sri Lanka was never going to be easy to navigate for New Delhi.