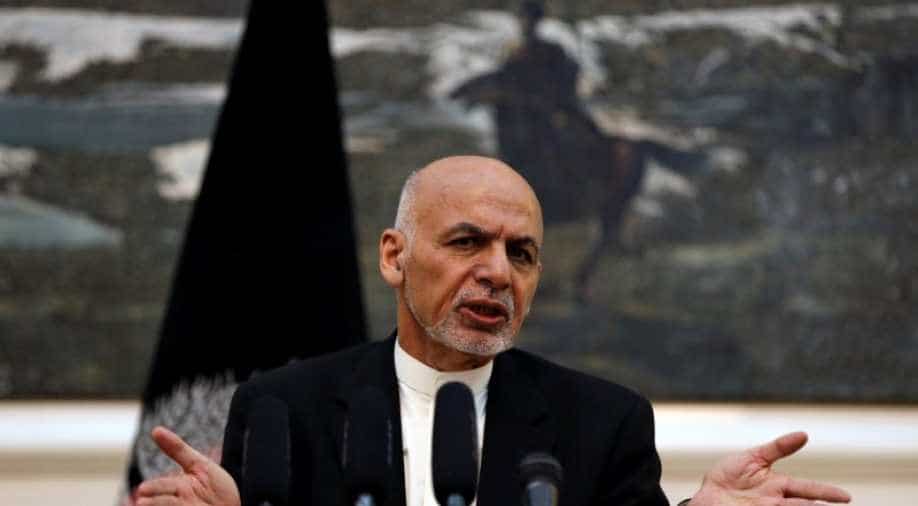 Ghani said that all the countries in Afghanistan's neighbourhood and beyond "need to identify cross-border terrorism and a fund to combat terrorism". Photograph:( Reuters )

It doesn't get more direct than what President Ashraf Ghani of Afghanistan had to say at Amritsar on Sunday.

"Pakistan," he told representatives of nearly 50 countries or organisations, including Pakistan foreign affairs and security adviser Sartaj Aziz, who had gathered in the northern Indian town for the sixth edition of the Heart of Asia - Istanbul Process on Afghanistan, "has pledged 500 million dollars for Afghanistan’s development. This amount, Mr Aziz, can be spent to fight terrorists and extremists in Pakistan."

TV cameras did not capture Aziz's expression but the sting in Ghani's words was not lost on anyone. The Afghan President did not stop at that.

“A key Taliban leader," the Afghan President said, "has himself admitted to getting sanctuary in Pakistan. He said that without Pakistan support, we would have not lasted for more than a month.”

As if on cue, Prime Minister Narendra Modi of India, who co-chaired the conference with Ghani, called for action "against those who support, shelter, train and finance" terrorists.

"Silence and inaction against terrorism in Afghanistan and our region will only embolden terrorists and their masters," he continued in the same vein.

This double-barrelled attack on Pakistan, by the Afghan and Indian leaders, was in keeping with India's attempts of late to shame their common neighbour and further isolate it diplomatically. The bonhomie between Kabul and New Delhi extended to the bilateral talks between Ghani and Modi on the margins of the conference.

Economic partnership via trade and connectivity, development assistance and security cooperation were among the bilateral, regional and global issues that came up for discussion in their meeting.

Indian foreign ministry spokesperson Vikas Swarup said that Ghani and Modi agreed to strengthen counter-terrorism cooperation to combat especially the cross-border nature of the scourge which had caused immense suffering to the people of India and Afghanistan.

Both countries decided to operationalise the additional one billion meant as Indian development assistance for infrastructure and connectivity projects. They also plan to introduce an air transport corridor between India and Afghanistan to give India and Afghan consumers and producers unimpeded access to each other's products and services.

Modi was to amplify it later by saying that "Afghanistan should be at the centre of our connectivity networks, not peripheral to them. On our part, we see Afghanistan as the hub for strengthening links of connectivity between South Asia and Central Asia".

"We," he said, "cannot deny that the more connected Afghanistan is with the regional arteries of trade, capital and markets, the more assured would be its economic growth and progress. President Ghani and I have converged on the priority of strengthening trade and transport linkages with other partners in the region."

For his part, Ghani said that all the countries in Afghanistan's neighbourhood and beyond "need to identify cross-border terrorism and a fund to combat terrorism". He lauded India's development role in his war-torn country by saying that Indian assistance is transparent and came without without strings attached. "There are no hidden agreements [or] secret conditions...it is convergence of interests and values of two states inspired by the belief in cooperative advantage."

Aziz defended by saying in his intervention afterwards at the conference that "it is simplistic to blame only one country for the recent upsurge in violence" in Afghanistan. In an oblique reference to the continued India - Pakistan tensions, he said that peaceful resolution of outstanding disputes will further improve regional cooperation and connectivity in the region. (Pakistan does not allow India access through its territory for exporting goods to Afghanistan.)

However, at a joint news conference with Deputy Foreign Minister Hekmat Karzai of Afghanistan, Indian Finance Minister Arun Jaitley (standing in for Foreign Minister Sushma Swaraj, who is indisposed) said that terrorism was at the very core of the deliberations and that the tone had been set by Ghani and Modi earlier in the day.

Karzai, in turn, spoke about how Pakistan, without naming it, is nurturing and flirting with terrorism, which has consequences not only for Pakistan itself but also for the region.

The participating countries, Jaitley added, recognised that terrorism was the biggest threat to peace and stability and the Amritsar Declaration (see below) adopted towards the end of the summit expressed concern over violence perpetrated by terrorist groups, such as Lashkar-e-Taiba and Jaish-e-Mohammad.

If there were fears that India - Pakistan tensions would hijack the conference agenda, it was not to be. In the end, Aziz's engagements did not go beyond the customary handshake and photo-op with Modi. Indian Foreign Ministry Spokesperson Vikas Swarup maintained that there was no pull-aside or bilateral meeting between Aziz and Indian National Security Adviser Ajit Doval either.

An excerpt from the Amritsar Declaration:

"We remain concerned by the gravity of the security situation in Afghanistan in particular and the region and the high level of violence caused by the Taliban, terrorist groups including ISIL / DAISHand its affiliates, the Haqqani Network, Al Qaida, Islamic Movement of Uzbekistan, East Turkistan Islamic Movement, Lashkar-e-Taiba, Jaish-e-Mohammad, TTP, Jamaat-ul-Ahrar, Jundullah and other foreign terrorist fighters. Acknowledging the support that terrorism derives in our region, we demand an immediate end to all forms of terrorism, as well as all support to it, including financing of terrorism. We recognize that terrorism is the biggest threat to peace, stability and cooperation in our region. We encourage the international community to continue to assist the Government of Afghanistan. We strongly call for concerted regional and international cooperation to ensure elimination of terrorism, in all its forms and manifestations, including dismantling of terrorist sanctuaries and safe havens in the Heart of Asia region, as well as disrupting all financial, tactical and logistical support for terrorism."