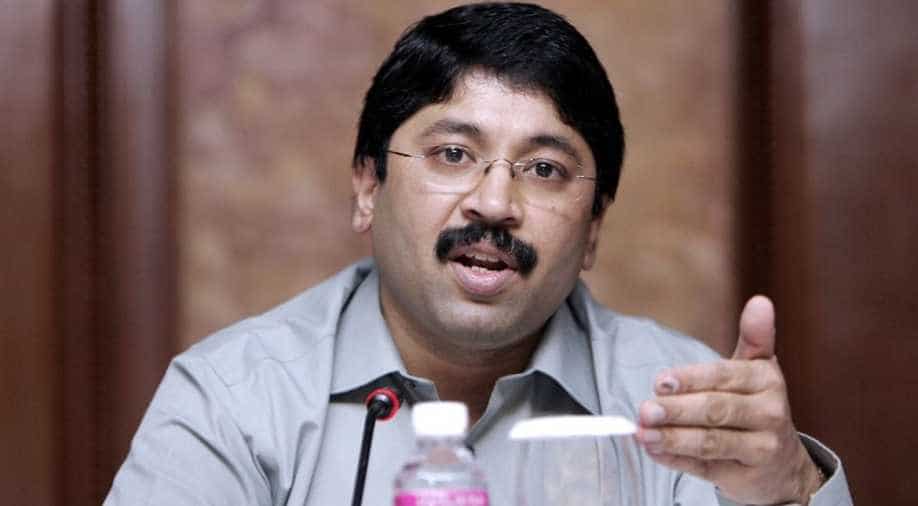 A special court discharged Dayanidhi Maran and his brother after it found insufficient evidence to prosecute them. Photograph:( AFP )

They have been discharged because of lack of evidence against them, ANI reported.

After the ruling, Dayanidhi Maran told ANI that he stood "vindicated" and that he had been the victim of a "politically motivated case."

After allegations, I resigned & stated I will prove my innocence, today I stand vindicated: Dayanidhi Maran on Aircel-Maxis judgement pic.twitter.com/8LHfwkbDKU

Saying from day1 its a politically motivated case,I've been victim.Struggled for 6 long years to prove innocence-DMaran on Aircel-Maxis case pic.twitter.com/AtH9PWFS9p

The Central Bureau of Investigation (CBI) and the Enforcement Directorate (ED) had accused the Maran brothers of helping Malaysian communications service provider Maxis acquire telecom Aircel in exchange for a kickback of approximately Rs 700 crores.

C Sivasankaran, former owner of Aircel, has alleged that as telecom minister, Dayanidhi Maran withheld crucial permissions and clearances as a pressure tactic till he sold his company to Maxis in 2006.

The order was passed by Special Judge O P Saini who is exclusively dealing with the 2G spectrum allocation scam cases and those cases arising out of the investigation into it.

In 2014, the CBI had filed charges against the Maran brothers, Malaysian tycoon T Ananda Krishnan, his aide Ralph Marshall, Sun TV, UK's Astro All Asia Networks,  Malaysia's South Asia Entertainment Holdings and Maxis Communications, and then additional secretary (Telecom) J S Sarma who died during the course of the probe.

They were chargesheeted for alleged offences punishable under section 120-B (criminal conspiracy) of Indian Penal Code (IPC) and under the Prevention of Corruption Act, PTI reported.

The Enforcement Directorate alleged that South Asia FM Limited and Sun Direct TV Private Ltd had received Rs 742.58 crore as "proceeds of crime" from Mauritius-based firms and that the two firms were then allegedly controlled by Kalanithi Maran.

Dayanidhi Maran, from Tamil Nadu's DMK party, was telecom minister between 2004 and 2007. He was replaced in Dr Manmohan Singh's cabinet by A Raja, also from the DMK, who has been accused of being the mastermind behind the 2G spectrum allocation scam.

Finally law has prevailed and justice has been done: Kanimozhi on Aircel-Maxis case judgement discharging Dayanidhi Maran & others pic.twitter.com/XY95uJjdoe

A special 2G court had in September last year dismissed the applications filed by the Maran brothers, challenging its jurisdiction to try the Aircel-Maxis deal case.

Pronouncing the order, the court had then said, "There is no manner of doubt that by the standard of subject matter and periodicity of alleged crime, the case fairly/squarely falls within the description/ designation of the 2G scam."

The Maran brothers challenged the jurisdiction of the special 2G court in both cases lodged by the Enforcement Directorate and the CBI.