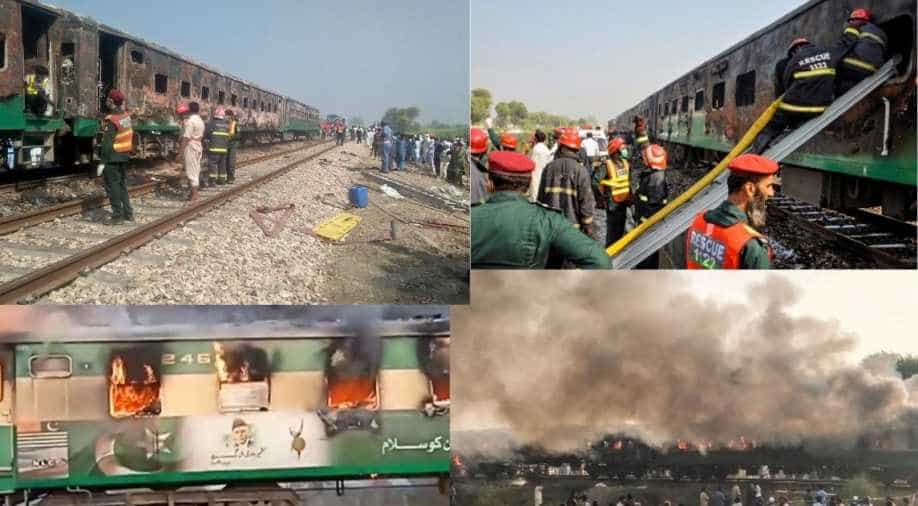 Fire engulfed three carriages of the train after a gas canister that passengers were using to cook breakfast exploded.

Relatives of victims of a Pakistani train fire that killed 74 people struggled on Friday to identify their loved ones, with dozens of people burned beyond recognition and needing DNA testing to determine who they are, an official said.

Fire engulfed three carriages of the train after a gas canister that passengers were using to cook breakfast exploded, triggering the worst disaster on Pakistan's accident-plagued railway system in nearly 15 years.

Jameel Ahmad, a senior official in Rahim Yar Khan district in Punjab province, where the blazing train came to a stop, said 57 of the victims were very badly burned.

"Relatives of several people came to identify them but failed," Ahmad told Reuters. "Now the government is collecting DNA samples."

The train was on its way to the city of Rawalpindi, near the capital, from the southern city of Karachi, with many passengers travelling to a religious gathering.

People sneaking stoves onto trains to cook on long journeys is a common problem in Pakistan, despite rules against it, officials say.

An investigator said that according to survivors, people in the compartment where the fire broke out had used gas cookers at least three times. Pakistan Railways showed pictures of a blackened, cracked gas canister recovered from the wreckage.

Pakistan’s colonial-era railway network has fallen into disrepair in recent decades due to chronic under-investment and poor maintenance, and accidents are common.

About 130 people were killed in 2005 when one train rammed into another at a station in Sindh province, and a third train hit the wreckage.