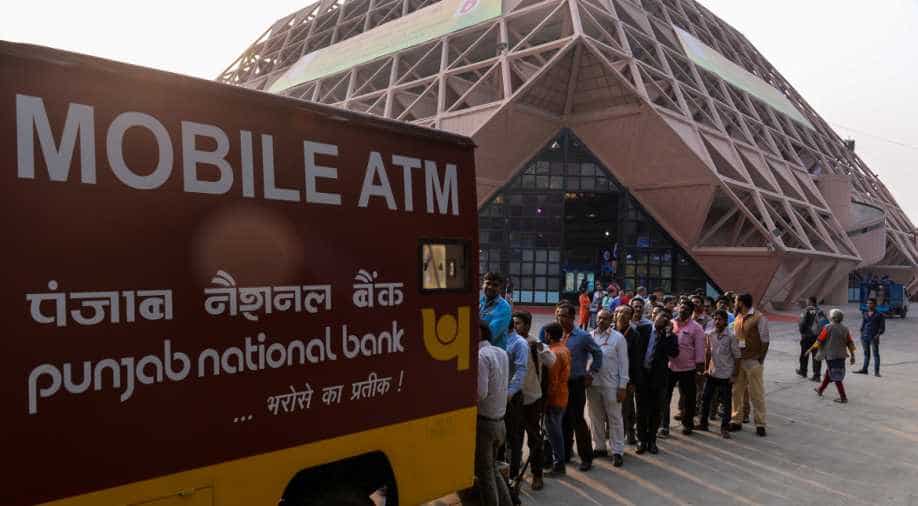 This procedure is being introduced to begin with in the metro cities and expanded to other areas later, the RBI said in a statement. Photograph:( AFP )

Banks across India on Wednesday (November 16) began use of indelible ink marks to ensure people only change old notes once under Prime Minister Narendra Modi's scheme to fight "black money", resorting to a tactic used to prevent multiple voting in elections.

Finance ministry had on Tuesday (November 15) directed banks to use indelible ink to prevent "unscrupulous persons" from sending people from one bank branch to the next to exchange abolished 500 and 1000 rupees bank notes.

As per the government statement, 11 branches of SBI are using the method to weed out customers queuing up again and again to exchange invalid currency notes. As per the Standard Operating Procedure (SOP) for exchanging notes, concerned bank branches and post offices would put indelible ink mark on the right index finger of the customer so as to identify that he/she has exchanged the old currency notes once. The indelible ink can be applied by the cashier or any other official designated by the bank.

Hailing the move, a customer in northern Ludhiana city, Priyanka Kashyap, said the measure introduced by the finance ministry would prevent people from exchanging the currency notes multiple times.

"This system is absolutely correct. Nobody can cheat now and come for a number of times. It proves that nobody can collect the payment twice," said Kashyap.

The government only gave people a few hours notice before the old 500 and 1,000 rupee bank notes - which accounted for 86 per cent of cash in circulation - were scrapped.

The demonetisation of two of India's largest currency notes has left millions high and dry and threatens to bring much of the cash-driven economy to a halt.

Bank authorities, meanwhile, said the customers have welcomed the move and things were going smoothly.

"We started with applying ink from today after the government's and bank's instructions. So, whosoever is withdrawing the limit of INR 4,500 ($67 US) we are applying ink on their fingers. Everybody is satisfied and coming in queues. Everybody is disciplined. We are not facing any problem. Everything is properly managed," said Union Bank branch manager in Ludhiana city, B S Ralan.

Some people, however, criticised the move saying it was only a precautionary measure and not a permanent solution to check people from exchanging old notes from different banks.

To begin with, this procedure is being introduced in the metro cities and will be expanded to other areas later, the RBI said in a statement. The indelible ink is supplied to the bank/post offices by Indian Banks' Association (IBA) in coordination with the banks and consultation with RBI.