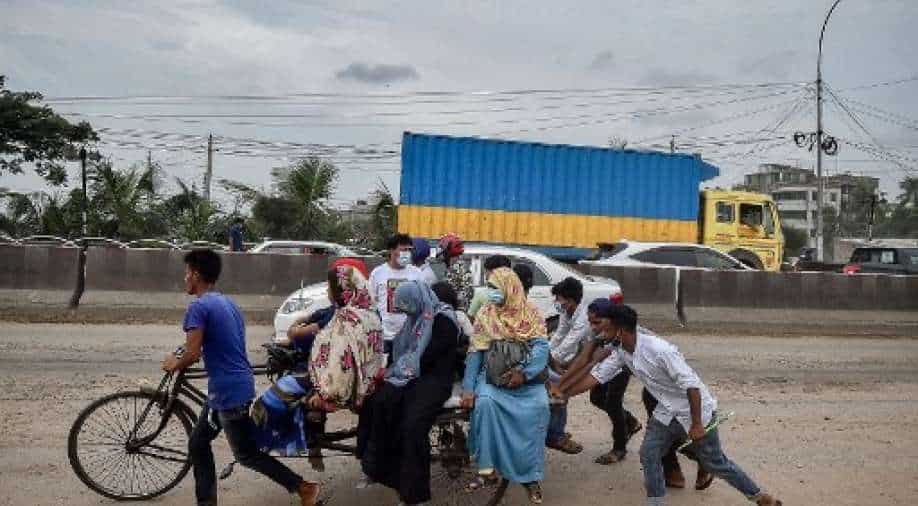 Migrants and other people board a cycle rickshaw cart as they leave for their native places after Bangladesh's authorities ordered a new lockdown Photograph:( AFP )

The Bangladesh government said it will allow people to go out only in emergency situations with infection rates rising since mid-May.

As Bangladesh entered into a lockdown on Monday, the country's health department announced that 119 people had died of the virus on Sunday which was the highest single-day death toll since the pandemic began last year.

The death toll due to COVID-19 in the country has now reached over 14,170 with over 888,400 cases. The government last week had announced a nationwide lockdown from June 28 amid a surge in coronavirus cases.

The country has witnessed a spike in daily cases since April with the highest number of fatalities occurring on April 19 with 112 deaths.

Bangladesh has been registering over 5,000 coronavirus cases for the past few days with the Delta variant being the dominant strain, according to officials.

The government has put stringent measures in place with the lockdown set to take effect allowing only essential services to operate as workplaces have been shut and people asked to work from home.

The government said it will allow people to go out only in emergency situations with infection rates rising since mid-May. The government has decided to enforce a hard lockdown this time shutting down malls and curbing public transport.

Tourist spots including community centres and resorts have been ordered to remain shut with hotels and restaurants to remain open for a limited time.

The country has been slow to vaccinate its citizen especially after India stopped exporting vaccines due to the second wave.

Bangladesh reached out to China for the vaccine with the Xi regime set to deliver large doses of the Sinopharm vaccine. The country was earlier inoculating citizens with the AstraZeneca vaccine supplied by the Serum Institute of India.

The government is also attempting to get a further 68 million doses from Covax with the vaccination drive running at a slow pace with just 2.6 per cent of people being inoculated so far, according to reports.