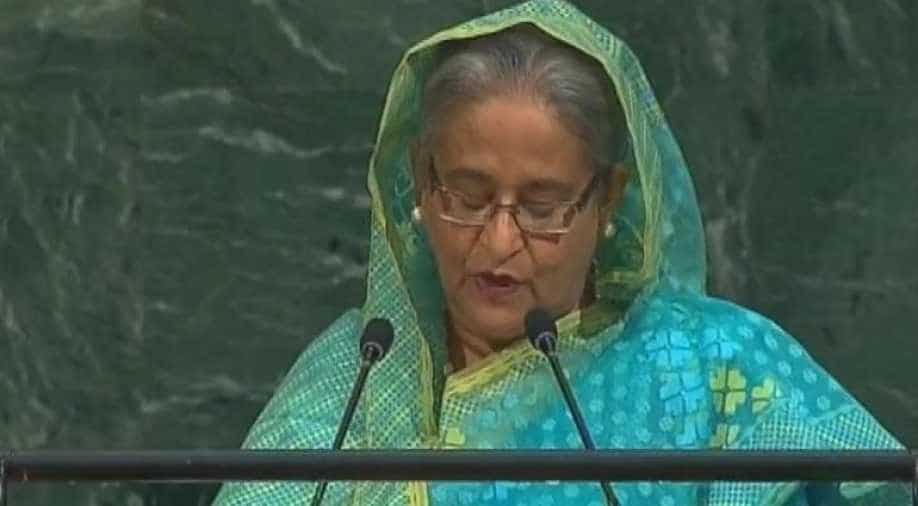 Bangladesh PM Sheikh Hasina said the recent exodus of Rohingya has brought the number of refugees from Rakhine living in Bangladesh to over 800,000. Photograph:( ANI )

Bangladesh's prime minister on Thursday proposed creating UN-supervised safe zones inside Myanmar to protect Rohingya Muslims who are fleeing a military crackdown to seek refuge in her country.

"These people must be able to return to their homeland in safety, security and dignity," Prime Minister Sheikh Hasina told the UN General Assembly.

The United Nations says more than 420,000 Rohingya have fled for safety to Bangladesh in the face of an army campaign in northern Rakhine state that includes rape and the burning of villages.

The military operation was sparked by attacks carried out by Rohingya militants on police posts on August 25.

Hasina accused Myanmar authorities of laying landmines on the border to prevent the Rohingyas from returning and said the United Nations must take immediate measures to find a solution to the crisis.

The prime minister laid out a five-point plan that called for the protection of the Rohingyas in "safe zones that could be created inside Myanmar under UN supervision."

The United Nations has described the military operation as "ethnic cleansing" and French President Emmanuel Macron went further, describing it as a "genocide."

Myanmar must stop the violence and "the practice of ethnic cleansing", agree to allow a UN fact-finding mission, ensure the return of refugees and abide by a report that recommends citizenship for the Rohingya, said Hasina. They currently lack it.

There has been mounting international outrage over the plight of the Rohingya, prompting the UN Security Council this month to call for an end to the violence.

The creation of such "safe areas" would require the approval of the Security Council where China, a strong supporter of Myanmar's former junta, has veto power.

The 1.1-million strong Rohingya people have suffered years of discrimination in Myanmar, where they are denied citizenship even though many have longstanding roots in the country.

The recent exodus of Rohingya has brought the number of refugees from Rakhine living in Bangladesh to over 800,000, said the prime minister.