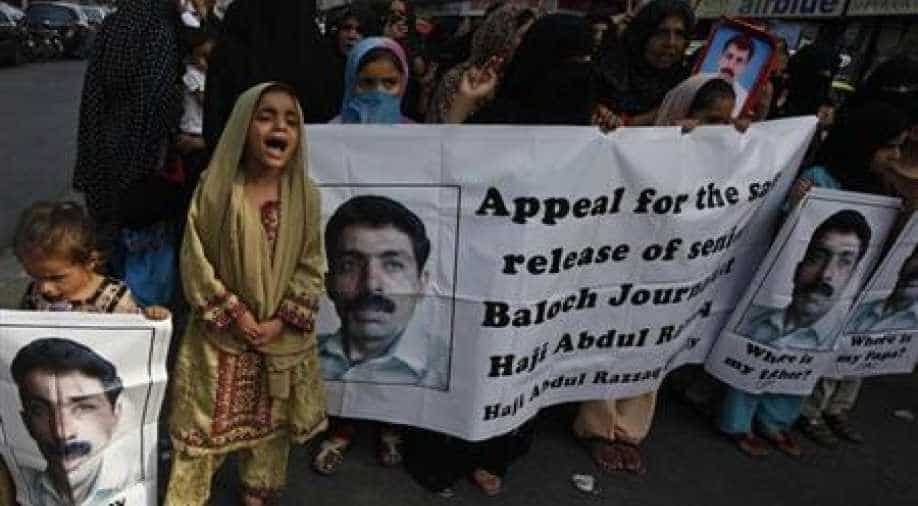 The daily sit-in protest in the provincial capital of Balochistan began on June 28, 2009 after a doctor, Deen Muhammad, was abducted by "unknown men".

For over 11 years relatives of people who disappeared in the murk of a separatist insurgency in southwestern Pakistan have gathered outside the Press Club of Quetta wanting to know who took their fathers, husbands and sons.

The daily sit-in protest in the provincial capital of Balochistan began on June 28, 2009 after a doctor, Deen Muhammad, was abducted by "unknown men".

Relatives suspect Muhammad, like many other missing ethnic Balochs, was snatched by Pakistani security forces hunting separatists, who for decades have waged a campaign for greater autonomy or independence.

Sometimes less than a dozen join the daily protest, other days many more, but Muhammad`s two daughters have been among the regulars since they were eight and ten years old.

"Our little hands were holding pictures of our father back then; now we have grown up and we still have no clue if he is alive," Sammi Baloch, now 21, told Reuters by telephone from Quetta.

Even when the weather is too extreme in Quetta to hold protest, a sit-in is observed by
Balochs in front of the press club in Karachi, Pakistan`s largest city and a melting pot for different ethnic groups.

The insurgency in Balochistan, a sparsely populated, mountainous, desert region bordering Afghanistan and Iran has sometimes waned and sometimes intensified over the years.

But for all the durability of the Baloch struggle, the conflict has seldom drawn international attention. It grabbed headlines however, in late June when a group of young Baloch militants launched an attack on the Pakistan Stock Exchange in Karachi.

On Tuesday, three soldiers were killed and eight wounded in an area known for attacks by Baloch fighters. But beyond giving the grinding casualty toll, the veil of secrecy over the conflict is seldom lifted, and foreign journalists are often discouraged from visiting Balochistan.

The military did issue a statement last year sympathising with families of missing Balochs, while saying that some may have joined militant groups and "not every person missing is attributable to the state."

When he led the BNP into an alliance with Khan`s coalition two years ago, Akhtar Mengal gave the government a list of 5,128 missing persons.

Since then over 450 of the people on the list have been found or returned to their families, but during the same period Mengal says another 1,800 were reported to have disappeared.

Another Baloch party - set up in the months prior to the 2018 elections with backing from the military establishment, according political analysts - is in a coalition with Prime Minister Khan`s party at both federal and provincial level.

But, Mama Qadeer, who heads a group called Voice for Baloch Missing Persons, keeps his own count.

"In last six months, the number of Baloch missing persons has risen," he told Reuters by telephone. His son disappeared a decade ago.

In February last year, Qadeer`s group handed a list of 500 missing to provincial officials. Since then nearly 300 have been returned to their homes, but 87 others disappeared in the first half of this year, according to the group.

A federal commission set up nine years ago listed 6,506 cases of enforced disappearances nationwide by the end of 2019. Most came from the northwestern province of Khyber-Pakhtunkhwa.

Only 472 were registered from Balochistan. Advocacy groups say Balochistan`s number is far higher, pointing to difficulty in having cases accepted by the commission.

"There`s hardly a home in Balochistan that hasn`t had a relative or loved one picked up," Mohammad Ali Talpur, an aged activist who once fought alongside Baloch insurgents in the 1970s, told Reuters.

The conflict has a long, complex history, but since that time the stakes have risen as Balochistan`s wealth of copper, gold, gas and coal deposits caught China`s eye.

The prospects of Pakistan`s most reliable ally pouring in money excited successive governments, while fuelling Baloch resentment over how little would come their way.

Separatist militants have frequently targeted Chinese construction in Gwadar, a port on the Balochistan coast, near the entrance to the strategically-important Gulf.

And in 2018, the Balochistan Liberation Army launched an assault on the Chinese consulate in the southern port city of Karachi, killing four Pakistani police and civilians.

It was the most high profile attack by the group until June 29 this year, when its fighters attacked the stock exchange, again killing four people.

The attack came a day after hundreds of relatives of missing Balochs gathered in Quetta to mark the four thousandth day of their protest since the disappearance of Dr Muhammad.