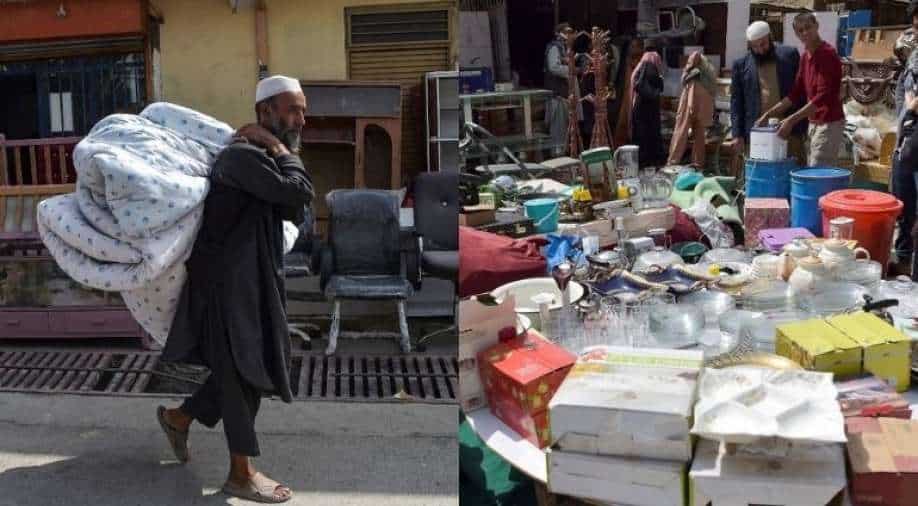 A man carries blankets over his shoulders to sell at a market, where desperate Afghans are selling their belongings, in the northwest neighbourhood of Khair Khana in Kabul. Photograph:( AFP )

The Kabul's flea markets are full of desperate Afghans, who are being forced to sell their belongings at low prices to fund their escape from Taliban rule or just to pay for food. Several plates, glasses, kitchen appliances, 1990s television sets, old Singer sewing machines, etc are up for sale

Afghan crisis seems to be deepening day by day. Now, the Kabul's flea markets are buzzing with desperate Afghans, who are trying to leave the county or facing cash crunch in these difficult times.

Afghans are being forced to sell their belongings at low prices to fund their escape from Taliban rule or just to pay for food.

After the Taliban took control of the country, Afghans say the job opportunities have dried up. The citizens are allowed to withdraw $200 per week only from bank accounts, which means cash is in short supply.

Mohammad Ehsan, a resident who was trying to sell two blankets, said, "We don't have anything to eat, we are poor and we are forced to sell these things."

The building project where Ehsan worked as a labourer has been cancelled or put on hold. "Rich people were in Kabul, but now everybody has escaped," Ehsan told AFP.

Ehsan is one of many Afghans, who come to the flea markets, to sell what they can spare directly to buyers. They could be seen carrying their possessions on their backs or rolling them along on street carts.