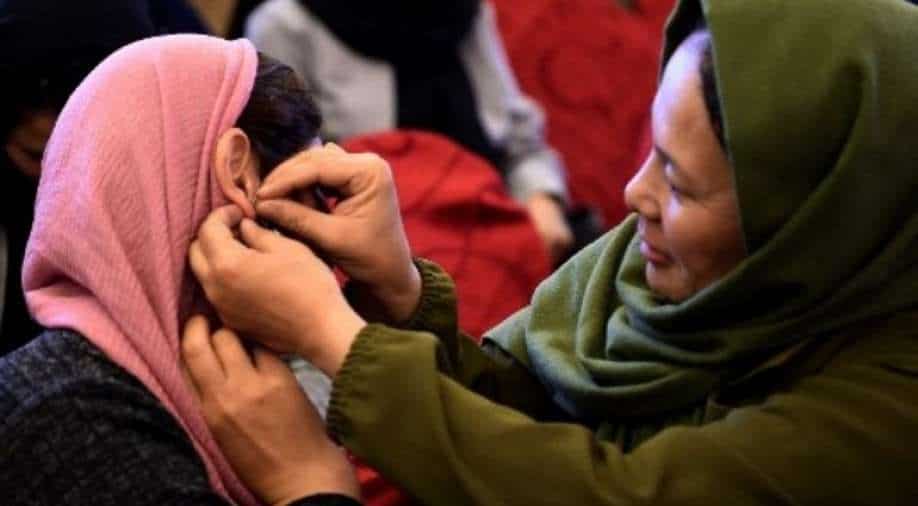 A Hazara woman (R) assists her friend with an earring as they attend an event on International Women's Day in Bamiyan Province on March 8, 2021. Photograph:( AFP )

#IAmMySong has been trending on the web portal, with Afghan girls recording clips of themselves singing songs

Afghanistan’s Education Ministry recently put out a memo prohibiting girls aged 12 and over from singing at school functions.

Soon after the memo was released, social media caught air of its contents, prompting authorities to refer to the memo as a “mistake”, and suggesting that the authors of the memo had not clearly understood the objective.

Nevertheless, Twitter spares no mistakes. #IAmMySong has been trending on the web portal, with Afghan girls recording clips of themselves singing songs.

Afghanistan is undergoing multiple upheavals right now, with the US planning to withdraw from the country. Critics fear that all progress made in terms of human rights could lapse if the Taliban assumes power.

Before Taliban was ousted by the US, they ran the country on mostly anti-women lines. Among its many dictates, education was denied to all girls. And all forms of entertainment - including music and television was banned. Women are only allowed access to religious music.

We raise our voices in protest against the extremist and discriminatory order of the Ministry of Education!#IAmMySong pic.twitter.com/EnfycjiMtf

Since then, the memo has been rescinded by the ministry. It was sent to all school districts in Kabul. Soon after, a fresh memo was issues, which banned music groups for not only girls of secondary schools, but also for boys.

Associated Press reported that the government claims objective of the move is not to ban music, but to prevent coronavirus from spreading.

But many believe this is an act of damage control, prompting the hashtag, which had received over 600,000 clicks so far. The hashtag was reportedly started by Ahmad Sarmast, the founder of Afghanistan’s Institute of Music.