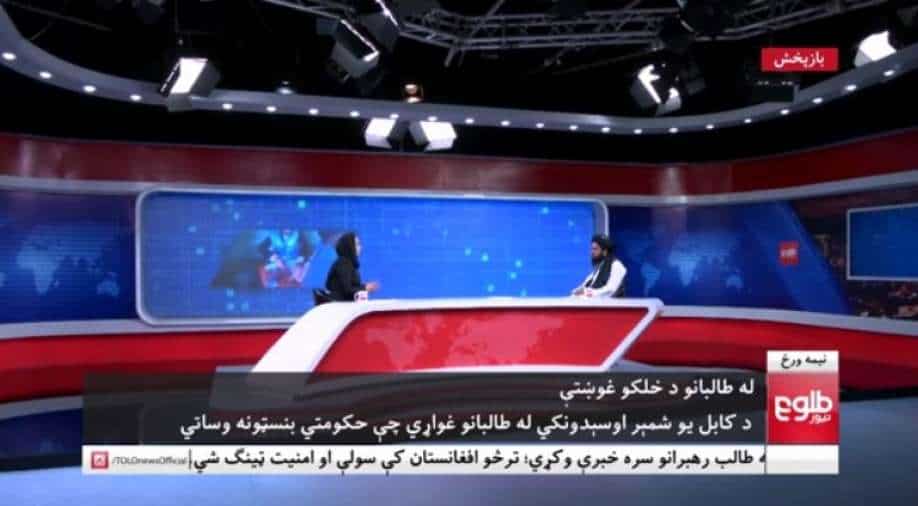 Beheshta Arghand, a female television anchor, interviewed the Taliban official on camera on Tuesday in the channel's studio, asking about the situation in Kabul and the Taliban's house searches in the capital. Photograph:( Twitter )

Tolo News, Afghanistan's most popular 24-hour news channel, resumed its broadcast with female anchors on Tuesday and one even interviewed a Taliban official, a stunning sight considering how much women's rights were stifled under their previous rule.

A female anchor from ToloNews interviewed a top Taliban official in the studio today, which was unimaginable when the Taliban governed Afghanistan from 1996 to 2001.

The channel's head of news Miraqa Popal made the announcement in a tweet.

"Our female presenter is interviewing a Taliban media team member live in our studio," Tolo's head of news, Miraqa Popal, wrote on Twitter.

Earlier on, Popal said: "We resumed our broadcast with female anchors today. @TOLOnews #Afghanistan." Popal said, adding a photo of a female anchor presenting the news on the channel to his tweet.

We resumed our broadcast with female anchors today.@TOLOnews #Afghanistan pic.twitter.com/YLqtJEYceL

#Afghanistan: A female Afghan journalist of @TOLOnews reporting live today from the streets of Kabul. pic.twitter.com/dyRZM3m9bh

Since the Taliban took control of Kabul on August 15, women have been conspicuously absent from all major Afghan news networks.