A tale of two women: How the Congress-SP deal was salvaged 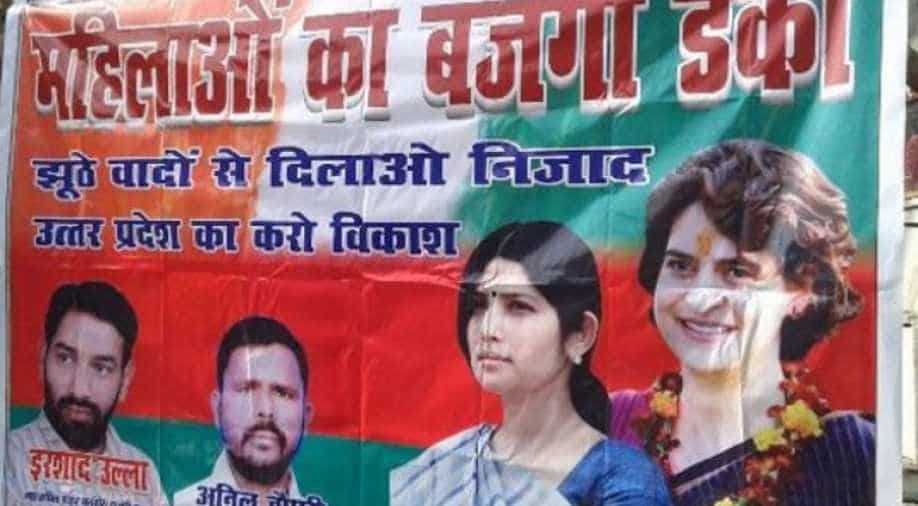 Priyanka is believed to have said to Akhilesh and Dimple that if the SP does not ally with the Congress, that will mean it is supporting the BJP. Photograph:( ANI )

Congress and Samajwadi Party (SP) leaders engaged in thrashing out the contours of their alliance by exchanging lists of seats and candidates last week were in for a rude shock to find Muawiyah Ali, who had won Deoband by-poll elections last year, in both parties' lists.

The Congress had claimed the seat, saying it had wrested it from the SP only last year by a margin of 3,400 votes. Ironically, the party seemed to be blissfully unaware that Ali had since joined the SP and being the sitting MLA, had got that party’s ticket. The Congress managed to get the seat but immediately replaced Ali with Mukesh Chaudhary. Ali, after realising the seat had gone to the Congress, reportedly insisted on fielding his wife who he claimed was still a party member.

The comedy of errors is a perfect illustration of how the Congress and the SP are targeting the same target audience in their bid to stop the Bharatiya Janata Party in the state; in the 2014 general elections, the right-wing party swept through the state, winning 71 of 80 Lok Sabha seats.

But the alliance has not been smooth sailing; that ship many a time came close to crashing on the rocks of political obstinacy and unpredictability. It finally took the firm hands of two women — Priyanka Gandhi and Dimple Yadav, both furiously backchanneling at the close — to steady nerves on both sides and bring the ship safely into harbour.

Sources in both parties told DNA that the alliance, finalised only yesterday, was part of backroom discussions since October 2016, when Congress vice-president Rahul Gandhi wound up his 3,500-km ‘Kisan Yatra’ across 48 districts and 141 Assembly segments. Upon returning Delhi, he reportedly toned down his initial resistance towards an alliance after a number of local leaders told him that going it alone would not cut much ice in a four-way contest and would only benefit the BJP.

Insiders say that most workers, including state unit chief Raj Babbar, initially favoured opening talks with the Bahujan SamaJ party (BSP). Those plans were scuttled after Mayawati rejected the overtures, saying she was only interested in a post-election tie-up.

Campaign strategist Prashant Kishor, who had earlier been asked to stay away from the state’s matters, was brought back to establish contact with Chief Minister Akhilesh Yadav, a move that coincided with the ongoing internecine Yadav family feud.

However, sources say it was only after the other Gandhi scion, Priyanka, came into the picture that Rahul gave his go-ahead for the alliance. She also reportedly shot down his idea of taking advantage of the SP infighting, as well as of demanding at least 200 seats, pointing out that the party likely did not have that many viable candidates.

Meanwhile, Akhilesh was not sure of getting the party symbol and feared that his father Mulayam Singh Yadav and uncle Shivpal Yadav could field candidates to undermine his chances. To shore up his strength, therefore, claim Congress leaders, Akhilesh had himself offered 144 seats to them. But when the dust settled on the SP’s internal war, with Akhilesh firmly in the saddle, his aides opposed giving more than 80 seats to the Congress.

It was again left to Priyanka, who worked with Akhilesh’s wife Dimple, to salvage the alliance. Over the past month, it is believed that Priyanka made at least three trips to Lucknow by a special aircraft to carry on negotiations, without anyone having an inkling of what she was up to. On Friday, after the SP announced its list of candidates, Priyanka is believed to have exchanged as many as a dozen text messages with Akhilesh and his wife Dimple.

In one, she is understood to have written something along the lines of ‘If you do not align with Congress, it that means the Samajwadi Party is supporting the rule of BJP’. Akhilesh, said an person familiar with the exchange, replied that that situation would never arise so long as Mulayam Yadav was the driving force of the party.

The only other persons in the loop were Congress General Secretary Ghulam Nabi Azad — whose role was a surprise, given his past opposition to such an alliance — and Akhilesh’s uncle Ram Gopal Yadav. It was finally Azad who broke the news of the alliance and asked local Congress leaders to identify seats. Azad reportedly met Ram Gopal secretly at least thrice to finalise the deal. In the 2012 elections, the SP had won 226 seats while the Congress had a mere 20 MLAs since eight of its members, including former state Congress president Rita Bahuguna Joshi, later defected to other parties.

Psychologically, they say, it will help Akhilesh beat anti-incumbency and pull floating voters, and also defeat the BJP strategy to divide the Muslim vote. Both parties are aiming for 35-37 per cent votes by targeting 25 per cent non-Muslims and attracting Muslims, who are 18 per cent of the population.

Pakistan to remain on the FATF grey list, relieved from additional sanctions

Pakistan to consider importing insecticides from India to fight locusts