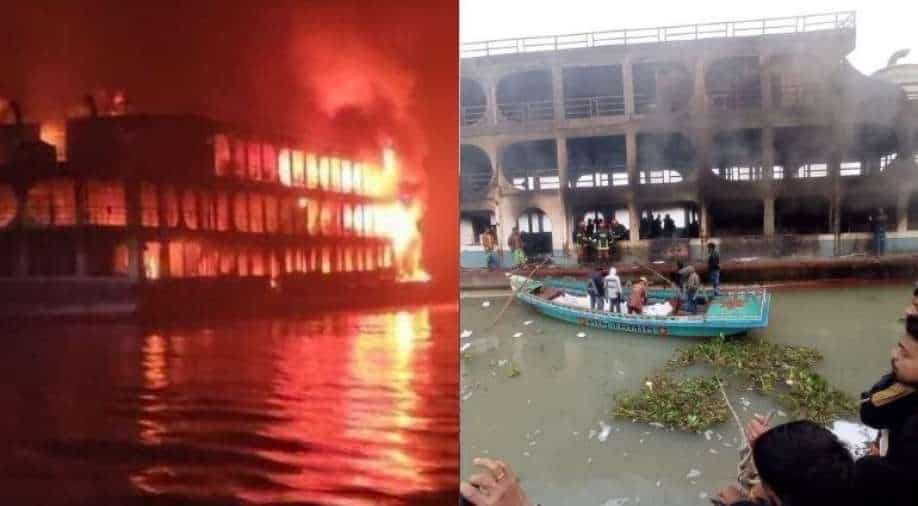 Image shows a passenger vessel on fire on in Bangladesh. Photograph:( Twitter )

An incident occurred early in the morning near the southern rural village of Jhakakathi, 250 kilometres (160 miles) south of the capital, Dhaka.

A crowded ferry caught fire in southern Bangladesh on Friday, killing at least 37 people, according to police.

"In the middle of the river, the three-story Obhijan 10 caught fire. We've found 36 bodies so far.It's possible that the death toll will grow.The majority were killed in the fire, and a few drowned after jumping into the river, "Moinul Islam, the local police head, said."

An incident occurred early in the morning near the southern rural village of Jhakakathi, 250 kilometres (160 miles) south of the capital, Dhaka.

The catastrophe was the latest in a series of such mishaps in the delta nation, which is crisscrossed by rivers.

Poor maintenance, inadequate safety regulations at shipyards, and overpopulation are all blamed by experts in the 170 million-strong South Asian country.

A fire in a food and beverage factory in Rupganj, an industrial town west of Dhaka, killed 52 people in July.

In February 2019, a fire ripped through Dhaka flats where chemicals were illegally stored, killing at least 70 people.

When a passenger boat and a sand-laden cargo ship crashed in a lake in eastern Bangladesh in August, at least 21 people were killed.

When the cargo ship's steel bow slammed into the other vessel near the town of Bijoynagar, the boat was allegedly carrying 60 passengers.