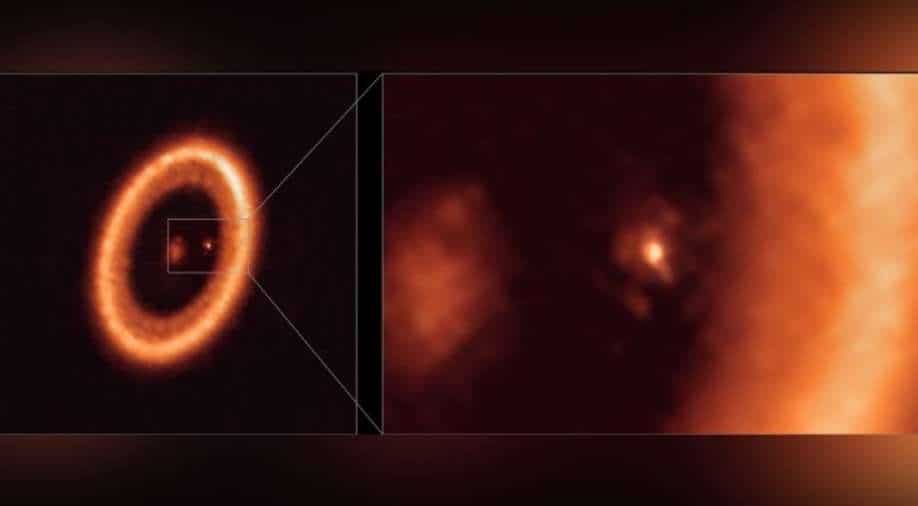 The disk is referred to as a circumplanetary disk and surrounds the exoplanet labelled "PDS 70c". The planet bears resemblance to Jupiter and orbits a star situated 400 light-years away

Astronomers have just detected a disk of dust forming around a planet outside our solar system for the first time.

The disk was detected by astronomers from the Max Planck Institute for Astronomy (MPIA) in Heidelberg. The images were taken by the Atacama Large Millimetre/Submillimetre Array (ALMA) in partnership with the European Southern Observatory (ESO).

This revelation sheds light on how moons and planets are formed in planetary systems that are still in their formative stage. For long, scientists have attempted to fully understand how natural satellites of planets are formed, including the Earth's Moon.

To better understand the process, scientists want to observe the creation of satellites like moon around planets situated outside our solar system, i.e., exoplanets. The exoplanet in question resembles the characteristics of Jupiter and is capable of producing multiple moons.

Myriam Benisty, a researcher at the University of Grenoble in France and the University of Chile and also the lead of the study claims that the research "presents a clear detection of a disk in which satellites could be forming”. The study was published in The Astrophysical Journal Letters.

"We obtained our ALMA observations at such excellent resolution that we could identify without a doubt that the disk is associated with the planet, and we are able to constrain its size for the first time,” Max Planck Institute for Astronomy quoted Benisty as saying.

The disk is referred to as a "circumplanetary disk" and surrounds the exoplanet labelled "PDS 70c". The planet bears resemblance to Jupiter and orbits a star situated 400 light-years away.

Earlier, astronomers posited that a moon-forming disk surrounded the planet, but its detection was only confirmed in the study published on July 22, 2021. Scientists claim that the disk has the same distance as Earth does from Sun. The disk accounts for a lot of mass, which could create at least three satellites the size of Earth's Moon!