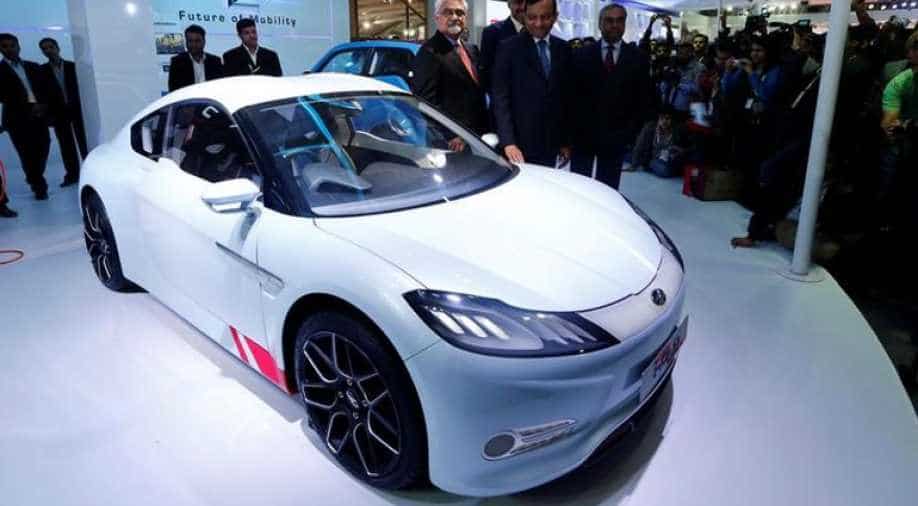 It would also mark a radical response by India as it looks to cut its oil import bill to half by 2030 and reduce emissions as part of its commitment to the Paris climate treaty. Photograph:( Reuters )

India's most influential government think-tank has recommended lowering taxes and interest rates for loans on electric vehicles, while capping sales of conventional cars, signalling a dramatic shift in policy in one of the world's fastest growing auto markets.

A draft of the 90-page blueprint, seen by Reuters, also suggests the government opens a battery plant by the end of 2018 and uses tax revenues from the sale of petrol and diesel vehicles to set up charging stations for electric vehicles.

The recommendations in a draft report by Niti Aayog, the planning body headed by Prime Minister Narendra Modi, are aimed at electrifying all vehicles in the country by 2032 and will likely shape a new mobility policy, said government and industry sources.

The report's focus solely on electric vehicles marks a shift away from the current policy that incentivises both hybrid vehicles - which combine fossil fuel and electric power - and electric cars, and is worrying some automakers.

"India's potential to create a new mobility paradigm that is shared, electric and connected could have a significant impact domestically and globally," said a draft version of the report, titled Transformative Mobility Solutions for India, which will be made public this week.

It would also mark a radical response by India as it looks to cut its oil import bill to half by 2030 and reduce emissions as part of its commitment to the Paris climate treaty.

Officials acknowledge the blueprint faces challenges. High battery costs would push up car prices and a lack of charging stations and other infrastructure means car makers, who have been consulted on the proposals ahead of publication, would hesitate to make the necessary investment in the technology.

"If we accelerate electric vehicle growth it will be a disruption for the auto sector and would require investment, but if we're not able to adapt quickly we risk being net importers of batteries," said a government source involved in the plans. "There has been resistance from car makers."

Mahindra & Mahindra is the only manufacturer of electric vehicles in India.

India, in 2015, launched a scheme called Faster Adoption and Manufacturing of Hybrid and Electric Vehicles under which it offered incentives for clean fuel technology cars to boost their sales to up to 7 million vehicles by 2020.

Despite incentives as high as 140,000 rupees ($2,175) on some cars, the scheme has made little progress, with the sales of electric and hybrid cars making up only a fraction of the 3 million passenger vehicles sold in India in 2016.

The scheme, which expired on March 31, has now been extended by six months while the future policy is worked out, two government officials said. Lack of clarity on policy risks delaying investment in the auto sector, one official added.

"Limit registration of conventional vehicles through public lotteries and complement that with preferential registration for electric vehicles, similar to that in China," the report said, in one of its most radical proposals.

To kick-start the shift, the report suggests bulk procurement of electric vehicles, building standardised, swappable batteries for two- and three-wheelers to bring down their cost and having favourable tariff structures for charging cars.

"Prioritise battery and charging infrastructure development," the report states while setting a 2018 goal for setting up a 250 megawatt per hour battery plant with an aim to reach one gigawatt of production by 2020.

It also recommends setting up battery swapping stations by 2018, common manufacturing facilities for components and increasing subsidies on all battery electric vehicles to bring them to cost parity with conventional models by 2025.

Other suggestions in the blueprint include incentivising the use of electric cars as taxis by lowering taxes, interest rates on loans for purchases and electricity tariffs for fleet operators, and lowering duties on makers of such fleet cars.

Puneet Gupta, South Asia manager at consultant IHS Markit, said the government would need to lead the change with generous incentives to achieve its goal.

"This is one of the most radical changes the government is talking about," said Gupta. "All cars being electric is a distant dream."