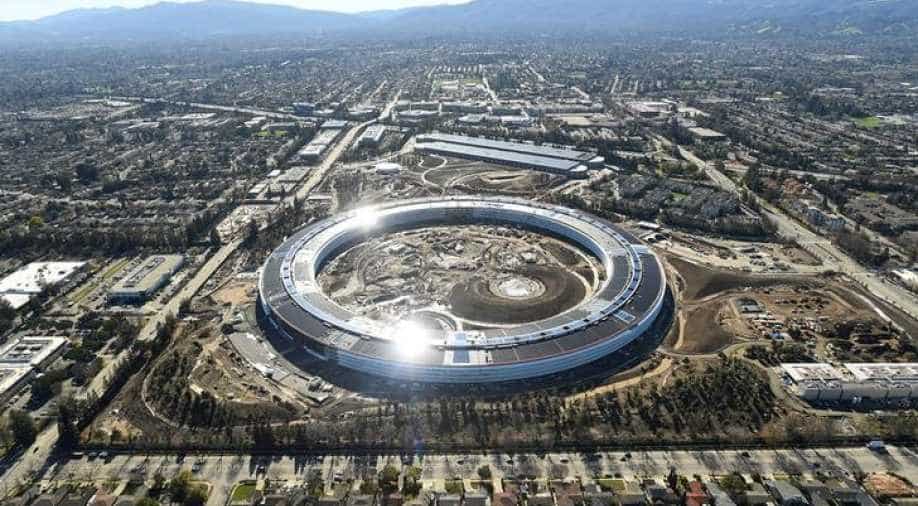 The Apple Campus 2 is seen under construction in Cupertino, California in this aerial photo. Photograph:( Reuters )

Inside the original Macintosh computer, Apple co-founder Steve Jobs inscribed the signatures of his team, revealing his deep concern for even the hidden features of his products.

His last work - Apple's sprawling new headquarters in Cupertino, California - will be a fitting tribute: a futuristic campus built with astonishing attention to detail. From the arrangement of electrical wiring to the finish of a hidden pipe, no aspect of the 2.8 million-square-foot main building has been too small to attract scrutiny.

But constructing a building as flawless as a hand-held device is no easy feat, according to interviews with nearly two dozen current and former workers on the project, most of whom would not be named because they signed non-disclosure agreements.

Since Apple unveiled its plans in 2011, the move-in date has slowly receded: Jobs' initial projection was 2015, but this spring now seems most likely, according to people involved in the project. A lengthy approval process with the city contributed to the delay.

Apple has not revealed the total price tag, but former project managers estimate it at about $5 billion - a figure CEO Tim Cook did not dispute in a 2015 TV interview. More than $1 billion was allocated for the interior of the main building alone, according to a former construction manager.

For all the time and money sunk into the project, some in the architecture community question whether Apple has focused on the right ends. The campus is something of an exception to the trend of radically open offices aimed at fostering collaboration, said Louise Mozingo, a professor and chair of the Department of Landscape Architecture and Environmental Planning at UC Berkeley. Its central office building - a massive ring of glass frequently likened to a spaceship – could be a challenge just to navigate, she noted.

"It's not about maximising the productivity of the office space, it's about creating a symbolic centre for this global company," she said. “They are creating an icon.”

An Apple spokeswoman declined to comment for this story.

Tech companies have long favoured generic office parks, which allow them to lease and shed space through booms and busts. Jobs’ unveiling of what's formally known as Apple Campus 2, months before his death, marked a new chapter in Silicon Valley architecture.

When completed, the campus will house up to 14,200 employees, according to the 2013 project description. The main building - which boasts the world's largest piece of curved glass - will be surrounded by a lush canopy of thousands of trees. Little remains from the cement-laden campus Apple acquired from Hewlett-Packard, though the iPhone maker preserved a century-old barn that remained intact as the land passed from tech giant to tech giant.

But what was most striking to those who worked on the project was Apple managers' insistence on treating the construction of the vast complex the same way they approach the design of pocket-sized electronics.

Apple's in-house construction team enforced many rules: No vents or pipes could be reflected in the glass. Guidelines for the special wood used frequently throughout the building ran to some 30 pages.

Tolerances, the distance materials may deviate from desired measurements, were a particular focus. On many projects, the standard is 1/8 of an inch at best; Apple often demanded far less, even for hidden surfaces.

The company's keen design sense enhanced the project, but its expectations sometimes clashed with construction realities, a former architect said.

"With phones, you can build to very, very minute tolerances," he said. "You would never design to that level of tolerance on a building. Your doors would jam."

The project, which generated about 13,000 full-time construction jobs, took a toll on contractors. The original general contractors, Skanska USA and DPR Construction, left after work began, which construction experts called a rare development for a project of such scale. The reasons for the departures are unclear, and neither Apple nor the firms would comment.

Apple's novel approach to the building took many forms. Architect German de la Torre, who worked on the project, found many of the proportions - such as the curve of a rounded corner - came from Apple's products. The elevator buttons struck some workers as resembling the iPhone's home button; one former manager even likened the toilet's sleek design to the device.

But de la Torre ultimately saw that Apple executives were not trying to evoke the iPhone per se, but rather following something akin to the Platonic ideal of form and dimension.

"They have arrived at design principles somehow through many years of experimentation, and they are faithful to those principles," de la Torre said.

Fanatical attention to detail is a key tenet. Early in construction, Apple managers told the construction team that the ceiling - composed of large panels of polished concrete - should be immaculate inside and out, just as the inside of the iPhone’s audio jack is a finished product, a former construction manager recalled.

Thus, each of the thousands of ceiling panels had to win approval from both Apple's in-house team and the general contractor, once at the shop and then again at the construction site.

"The things you can’t see, they all mattered to Apple,” the former construction manager said.

Apple's headquarters is seen in Cupertino, California in this aerial photo. (Reuters)

One of the most vexing features was the doorways, which Apple wanted to be perfectly flat, with no threshold. The construction team pushed back, but Apple held firm.

The rationale? If engineers had to adjust their gait while entering the building, they risked distraction from their work, according to a former construction manager.

“We spent months trying not to do that because that’s time, money and stuff that’s never been done before,” the former construction manager said.

Signage required a delicate balancing act: Apple wanted all signs to reflect its sleek, minimalist aesthetic, but the fire department needed to ensure the building could be swiftly navigated in an emergency.

Dirk Mattern, a retired deputy fire chief who is representing the Santa Clara County Fire Department on the project, estimated he attended 15 meetings that touched on the topic.

"I’ve never spent so much time on signage," he said.

When Apple tapped general contractors Holder Construction and Rudolph & Sletten to finish the main building in 2015, one of the first orders of business was finalising a door handle for conference rooms and offices.

After months of back and forth, construction workers presented their work to a manager from Apple’s in-house team, who turned the sample over and over in his hands. Finally, he said he felt a faint bump.

The construction team double-checked the measurements, unable to find any imperfections - down to the nanometre. Still, Apple insisted on another version.

The construction manager who was so intimately involved in the door handle did not see its completion. Down to his last day, Apple was still fiddling with the design - after a year and a half of debate.

When construction wraps, the only fingerprints on the site will be Jobs'. Workers often had to wear gloves to avoid marring the delicate materials, said Brett Davis, regional director of the District Council 16 union for painters and related crafts.

"It's like a painting that you don't want to touch," he said. "It's definitely going to be something to see, if they let you in."