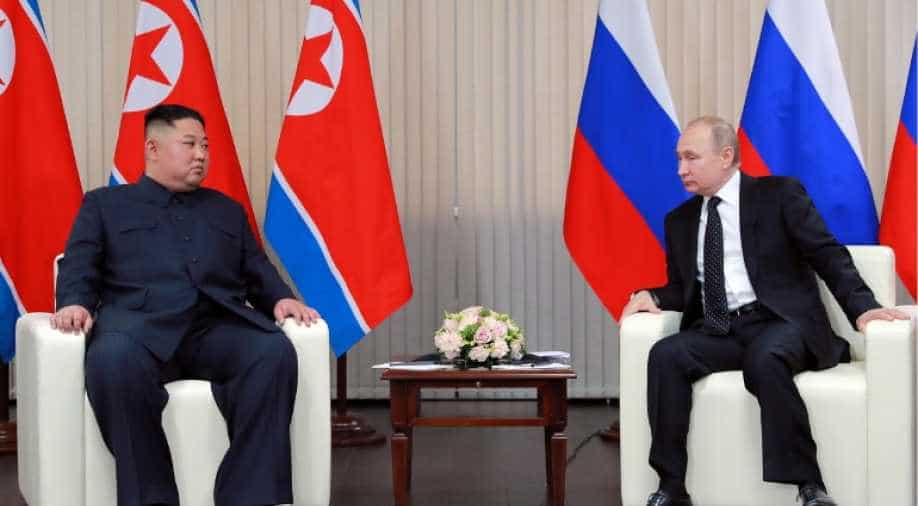 The Putin-Kim first ever meeting underscores their shared concerns about Trump’s unpredictable behaviour.

At a time when US-North Korea relations have hit the lowest ebb, the first-ever summit between Russian President Vladimir Putin and North Korean leader, Kim Jong-Un, in the Pacific port city of Vladivostok on April 25, assumed huge significance in shaping the regional political-security environment.

While actual details of the summit are not available, President Putin said that North Korea needs international security guarantees, if it is to end its nuclear programme.

Such guarantees, he said, would need to be offered within a multinational framework.

True, the erstwhile Soviet Union and North Korea had warm bilateral ties and President Putin has been trying to boost Russia’s engagement with North Korea in recent times.

It was in this context that Russia decided to write off a major part of the debt that North Korea had taken from the Soviet Union.

The engagement between Moscow and Pyongyang continued to flag, as Kim, following the Trump administration’s aggressive policy towards North Korea, decided to hold direct talks with the US to resolve the nuclear issue.

Trump too accepted Kim’s invitation for talks. In fact, this changed equation was quite disturbing for Russia because the success of Trump-Kim talks could have halted Russia’s ambition of playing an effective in resolving the crisis in the Korean Peninsula.

Meanwhile, efforts to resolve the nuclear issue between the US and North Korea through direct talks did not succeed with President Trump refusing to accept North Korea’s demand for complete removal of economic sanctions for its denuclearisation programme.

Consequently, while reports suggested that President Putin wanted to hold a meeting with Kim, the collapse of talks between the US and North Korea, finally led to the summit between Putin and Kim, as North Korea intensified its effort to garner the support of other countries to its approach of denuclearizing the Korean Peninsula.

The meeting proved to be highly encouraging for Kim because Russia fully backed North Korea vis-à-vis the US and Moscow reiterated that the Six-Party Talks is the best way to resolve the Korean crisis.

Russia wants to build a gas pipeline with North Korea to reduce its revenue losses. It also wants to ensure access to North Korea’s mineral resources.

For Kim, Russia can help improve North Korea’s basic infrastructure, including the railways, electricity and modernise its industry.

Improved ties with Russia is also important for North Korea to ensure that the Putin government does not send back its labourers working in Russia, since they are a major source of income for North Korea.

The Putin-Kim first ever meeting underscores their shared concerns about Trump’s unpredictable behaviour. There are apprehensions about President Trump aiming to change the political regime in North Korea.

At the same time, Putin has tried to send a signal about Russia’s influence over North Korea, which could be crucial in addressing the nuclear issue.

The summit between Putin and Kim has also boosted Russia’s stature in China, Japan and South Korea. In fact, it is now possible that South Korea could promote engagement with Russia to address several issues, including the conflict with North Korea.

While the doors of negations between the US and North Korea is now closed, Kim’s continued efforts to advance its nuclear programme, along with a new bonhomie between Russia and North Korea, has added a new dimension in the Korean issue.

It needs be seen how the Korean peninsula is denuclearised, promoting peace, security and development in the region and beyond