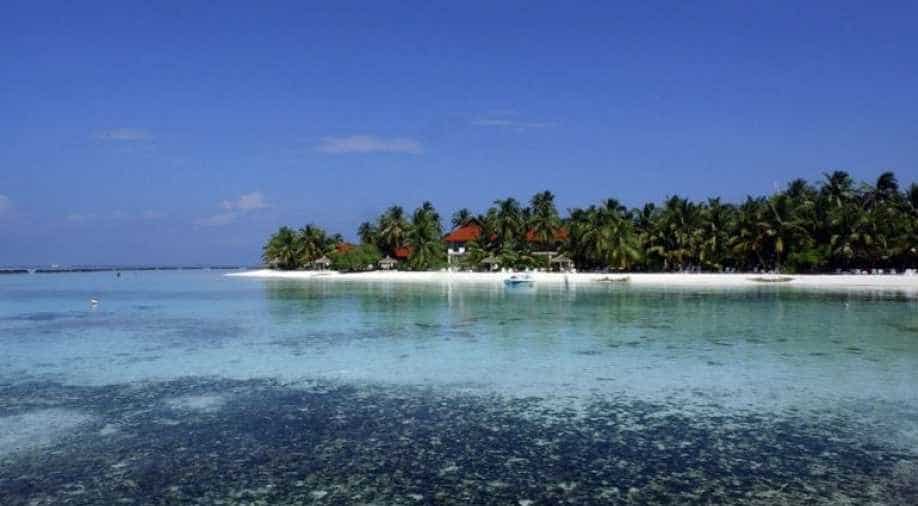 In this photograph taken on November 12, 2007, Kurumba island basks in the sunshine in the Maldives. Photograph:( AFP )

The island nation is not only remote and sparsely populated, it is also breathtakingly beautiful

At the recently concluded 4th Indian Ocean conference, Maldives’s foreign minister Abdulla Shahid aptly said, “To think of the Maldives is to think of the Indian Ocean. More than 99 per cent of Maldives is water…” The nation of islands played host to over 200 delegates and representatives from over 40 countries during the conference, with significant ministerial and secretarial presence from as many as twenty countries. In addition to the host country’s president, Ibrahim Mohamed Solih, the Sri Lankan Prime Minister, Ranil Wickremesinghe, also addressed the participants. The Indian delegation was led by External Affairs Minister, S Jaishankar.

A garland of islands — or Maladvipa in Sanskrit and Malaitheevu in Tamil — what could be a better description of the tiny tropical nation, Maldives? With less than half a million people inhabiting only a few of the 1192 beautiful coral islands spread across some 90,000 square kilometres, Maldives is one of the most dispersed nations in the world. It is also the lowest, with an average height of just 1.5 metres above the sea, its tallest natural point only 5 metres or less than 15 feet high.

With Male as its capital, this sparsely inhabited country of islands was a Sultanate for nearly 850 years. Before their conversion in the 12th century C.E. which created the Islamic kingdom, Maldivians were largely Hindu-Buddhist for centuries. Three years after its independence from the British on July 26, 1965, Maldives declared itself a democratic Republic. Almost equidistant from Africa to its West and Indonesia to its East, Maldives occupies a strategic place bang in the middle of the Indian Ocean.

The island nation is not only remote and sparsely populated, it is also breathtakingly beautiful. The shallow circular coral atolls in the middle of the clean aquamarine waters give it an extraordinary natural environment, which is also immensely fragile and delicate. The Indian Ocean earthquake and tsunami of December 2004 devastated the Maldives. Of the 1,000 islands, less than ten escaped flooding or destruction. Six islands were totally lost, while nearly sixty had to be fully evacuated. Several island resorts had to be closed. Tourism accounting for nearly 30 per cent of Maldives’ GDP was severely affected. Indeed, global warming and climate change could totally submerge the nation if the sea levels rise by just a few metres.

Given that its theme was “Securing the Indian Ocean Region: Tradition and Non-Traditional Challenges,” such environmental concerns, in addition to the usual political issues, came in for repeated discussions in this year’s Indian Ocean conference. In addition, several speakers addressed the imperative to maintain the Indian Ocean as a zone of peace and prosperity. What sort of regional and security architecture can be put into place to protect the region from piracy, human and drugs trafficking, not to mention the threat of terrorism? The near-consensus was that the rule of law on the high seas could only be guaranteed by the collective responsibility of a consortium of Indian ocean states. The undisputed, if often unspoken, fact that India would have to be the fulcrum in such as an arrangement was also underscored.

The strategic and economic importance of the Indian Ocean region can hardly be overestimated. With China and India alone accounting for 2.5 billion people, nearly half of the world’s population lives in the continental and littoral areas of the region. Each year, trillions of dollars of goods, especially a huge percentage of the world’s energy resources, pass through its waters in over 60,000 ships. No wonder, Ram Madhav, the brain behind the conference, called the Indian Ocean “the world’s most happening place.” In an op-ed published to coincide with the conference, he predicted that the “global axis of power is shifting eastwards” and unequivocally asserted that “the Indian Ocean is where India’s future lies.”

Organised by the India Foundation, the Indian Ocean conference has become an important forum to consolidate India’s natural, geo-political, and historical advantages. Given its plural democratic polity lead by a dynamic elected leadership plus growing economic and military clout, India must play a more decisive role in the region. This was emphasised by foreign minister Jaishankar in his presentation urging India to widen its horizons from the Indian Ocean to the larger Indo-Pacific ecumene. Jaishankar was sending a message to Indian strategic thinkers as well as to the diplomatic establishment that without quite challenging, or competing with, China, India need to take on more responsibilities.

Thinking, then acting East, helping to contribute to the blue ocean economy and increase its strategic influence is the way ahead for India. Given our deep civilizational and historical ties with countries and communities of the region, India is best suited to play such a pivotal role in the decades to come. For this strategizing our capabilities and working with reliable partners is crucial.