BJP is the only glue which binds 'disorganised' Opposition together 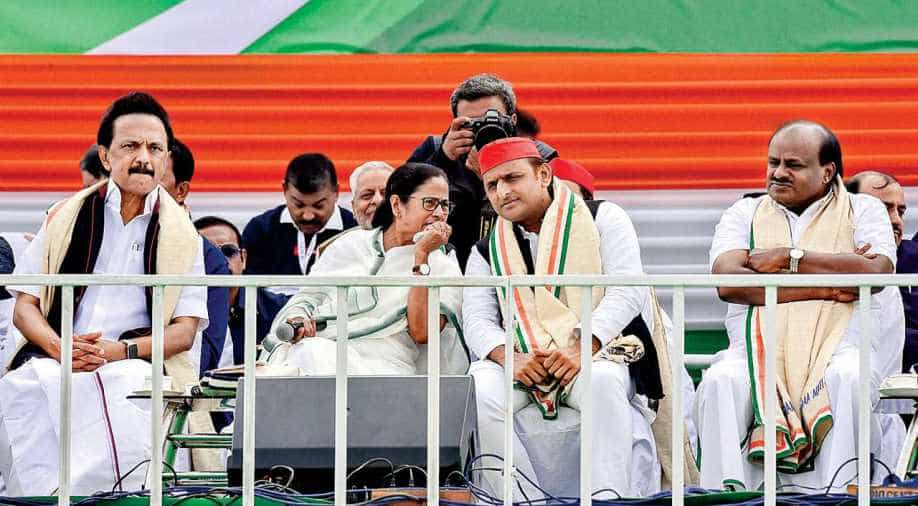 Instead of regrouping and putting heads together, the entire opposition remains disorganised.

It is writing on the wall. The defeat of the Congress is like the tip of an iceberg. Instead of regrouping and putting heads together, the entire opposition remains disorganised. The only glue which binds the Opposition together is BJP.

Today, it is easy to blame BJP for breaking MLAs, destroying governments, but the fact remains that Congress does not provide any ideological reason for the representatives to stay put in their respective camps. Trouble is bigger for the Congress as it has not been able to put its own house in order. There exists vacuum at the top and no senior Congress leader at the Centre has shown the courage to bell the cat. Punjab’s chief minister Amarinder Singh is the sole politician to have written an editorial on this issue and put his views in public.

Rest have chosen to address the issue in political mumbo jumbo. Congress government is on verge of collapse in Karnataka and 10 MLAs have joined BJP in Goa. The shift represents hollowing out of the ideological axis of all the regional parties including that of the Congress.

Fact is that Congress has nothing to offer to the public except 'Gandhis', which as a brand has been defeated in the just-concluded Lok Sabha elections making the party even more vulnerable.

What is different today from yesteryears is that parties opposed to Congress in the first 50 years also had a different ideological axis. They were either rooted in socialist ideology or made ingress into the Congress vote through hard identity politics at the state level.

Today, identity politics at the level of caste has been decimated by BJP. Its ideological axis revolves around nationalism and Hindutva. The Opposition, on the other hand, has neither shown intellectual resilience nor political astuteness in dealing with such a narrative.

All regional parties, including Congress, have no ideological glue to bind workers and leaders together at the time of political crisis.

Meanwhile, the regional parties are either tied to a dynasty or strong regional issue which is divorced from a larger world view. For example, Jagan Mohan Reddy has inherited Congress in Andhra Pradesh because local Congress politicians felt cheated by the Congress high command. TRS victory was based on the creation of Telangana and massive subsidy scheme. Mamata’s 'Ma Maati Manush' feels old and BJD is on brink of imitating AIADMK in Odisha as it has no succession plan in place.

Congress continues to procrastinate and has failed to come up with a succession plan. Earlier, even when Opposition was crushed and defeated by Congress, senior opposition leaders like Ram Manohar Lohia, Shyama Prasad Mukherjee, Namboodiripad, RK Hegde, Charan Singh, Jai Prakash Narayan, Chandrashekhar, Somnath Chatterjee, LK Advani, Rajmata Scindia, Atal Bihari Vajpayee and many others could grab the attention of the then Prime Minister Jawaharlal Nehru and his government. They could capture space in national media. None of that exists today.

Imagine, Bharatiya Jan Sangh dissolved itself and became part of Janata Party in 1977 but the experiment failed. It rebooted itself as BJP in 1980. By 1990 it had 89 seats in Lok Sabha and senior leadership at the state level. The Opposition has none today. If it wants to be a force against BJP, then it will need to articulate as to what does it stand for and what are its cherished ideological principles. Crass opportunism will not work this time around.