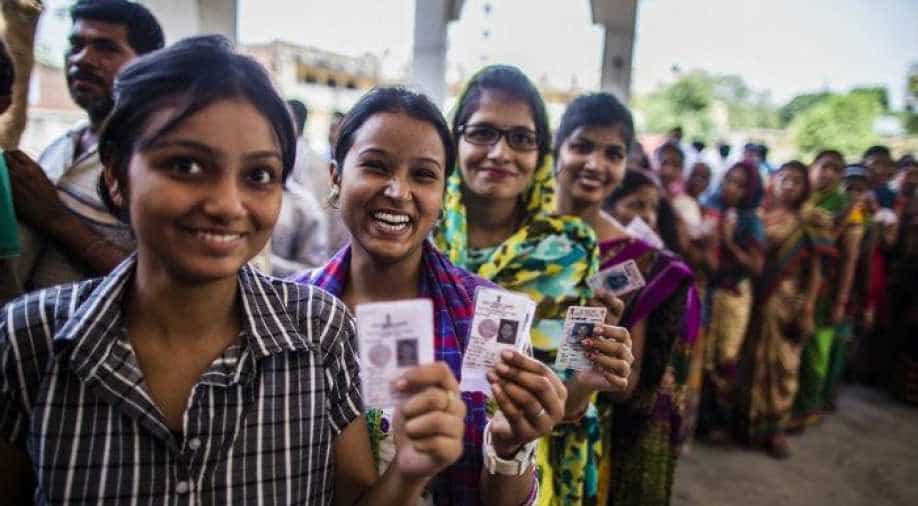 In the forthcoming 2019 Lok Sabha elections, the big challenge for the ruling party is to keep the young and the aspirational voters on its side.

There is little doubt that Narendra Modi’s phenomenal victory in the 2014 Lok Sabha election was fashioned in the main by the youth or more specifically, the first-time voter.

This was no ordinary display of youth power. Disillusioned by years of Congress corruption and cynicism, the BJP leader’s catchy slogans and persuasive appeal to the young and aspirational voters, won the saffron party its most significant spurs in history.

Given that two in three Indians are below 35 years of age and about a million more need employment every month, the then Gujarat chief minister’s promises found many takers.

While old habits like voting for dynastic politicians and netas with criminal backgrounds continued in 2014, there was greater awareness of macroeconomic issues than ever before. Modi’s constant stress on development reiterated that point.

For the young voters, Modi’s record on development as Gujarat chief minister offered hope in a country that had begun to lose faith in the Congress.

In the forthcoming 2019 Lok Sabha elections, with an estimated 12.7 crore first-time voters, making India the youngest country in the world, the big challenge for the ruling party is to keep the young and the aspirational voters on its side.

It is instructive to fall back on the past to perhaps understand what could happen in 2019. A media survey in early 2014 said that almost half of the nearly 15 crore Indians, who were going to be first-time voters in the 2014 general election, wanted to see Modi as the Prime Minister. And so they did.

But this vast flotsam is like a tinderbox; their passion can easily turn into a strong dislike, if the going gets tough and with little skills, the going is never going to be easy.

Consider this. According to the Centre for Monitoring Indian Economy (CMIE), a think tank that tracks business and economic data, as of February 2018, 31 million jobless people were looking for employment opportunities. This number is likely to rise as a fresh batch of graduates joins the market.

Between April and December 2016, a nine-month period, 2.3 lakh jobs were created across eight key sectors. However, given the enormous economic complexities, this is far short of what is needed: the latest figures suggest that 10 lakh Indians enter the job market every month.

The situation is so grim that one recent report indicated that 20 million Indians had applied for 1,00,000 jobs in the Indian Railways. In other words, there were 200 young jobless people applying for one post and competing with each other. And the jobs were no top-of-the-line railway executive openings, but people vying for locomotive drivers, technicians and the railway police — all of them need bare minimum qualifications.

Yet, such is the level of desperation that even highly qualified PhD scholars were among the applicants for the role of technicians.

India’s job crisis is now staring the Narendra Modi government in the face more ominously than when it came to power in 2014. The big problem for the present government, which has been trying and thinking out of the box to get around the problem, is that there is simply no time left to fix it. Elections are now a few months away and economic issues are not something that can be solved overnight.

The bigger problem is that the young generation, that is growing up on 4G and a 24-hour information inflow, has grown a little too aspirational for any government - let along this government’s comfort.

Most surveys, particularly the serious ones, believe that unemployment and lack of jobs are the main reasons for dissatisfaction among the young.

Two months ago, a group of students protested on rail tracks demanding employment. Stories of stampedes during examinations for government jobs, are not new by any chance, but they continue to be reported in India, live examples of how lives may not have changed with the change of government that has promised and even tried hard to achieve numbers that are simply humongous.

But clearly, elections every five years is a constitutionally guaranteed opportunity to keep seeking change until good governance is delivered.

Employment is directly linked to skills and the Modi government programme for skilling, despite best efforts, has run into choppy waters. Of the millions entering the workforce every year, skills are at a premium.

Now consider this. By 2022, India aimed to create a pool of 500 million skilled workers. The overly ambitious target could hardly be flawed, but it obviously did not take volumes into consideration.

According to the latest government statistics, the National Skill Development Corporation (NSDC) has been able to train 51 million since 2014. Of them, 21 million managed to get jobs.

A deeper study reveals that India could have taken a leaf out of China’s book. The Asian rival’s success in creating a skilled labour force can be attributed to its technical, vocational education and training system, which helped it to successfully transform into the world’s manufacturing hub after it was able to train millions of unskilled into highly skilled workers.

In the case of India too, the millions of those entering the job market are quite simply unemployable.