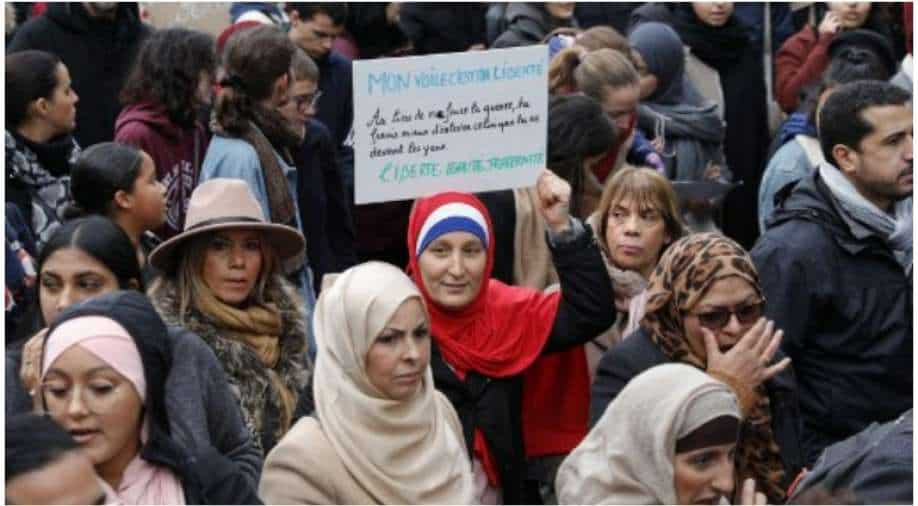 A woman holds a placard reading "my veil is my freedom" as she takes part in a demonstration march near the Gare du Nord, in Paris to protest against Islamophobia, on November 10, 2019 Photograph:( AFP )

France is a country with a large, poor, unintegrated Muslim population that feels that its identity and religion are under attack by its host state

The headscarf of Muslim women has emerged as a polarising issue in the presidential election yet again. France is divided between the top two presidential candidates – centrist Emmanuel Macron & far-right Marine Le Pen.

The final round of the debate started with rising cost of living & economic woes but kept shuttling between Islam & immigration. Towards the latter part of the debate, both contenders finally poured their hearts out on one subject – the hijab. This is an on-&-off debate across France. Elections and hate crimes rake up this latent issue as and when it suits their narrative. So, how did the hijab take center stage in French politics? Is it being used as a political tool? And what does this tell us about French secularism?

Since the beginning of the 20th century, Muslims, majorly from Africa, started pouring into France. After World War I, thousands from former French colonies who fought on the republic’s side were granted asylum. France even opened its borders to immigrant manpower. It was only in 1967 that their population topped one million. Today, it stands at about 5.7 million, which is nearly 9% of France’s population. The country is home to the largest group of Muslims in Europe. 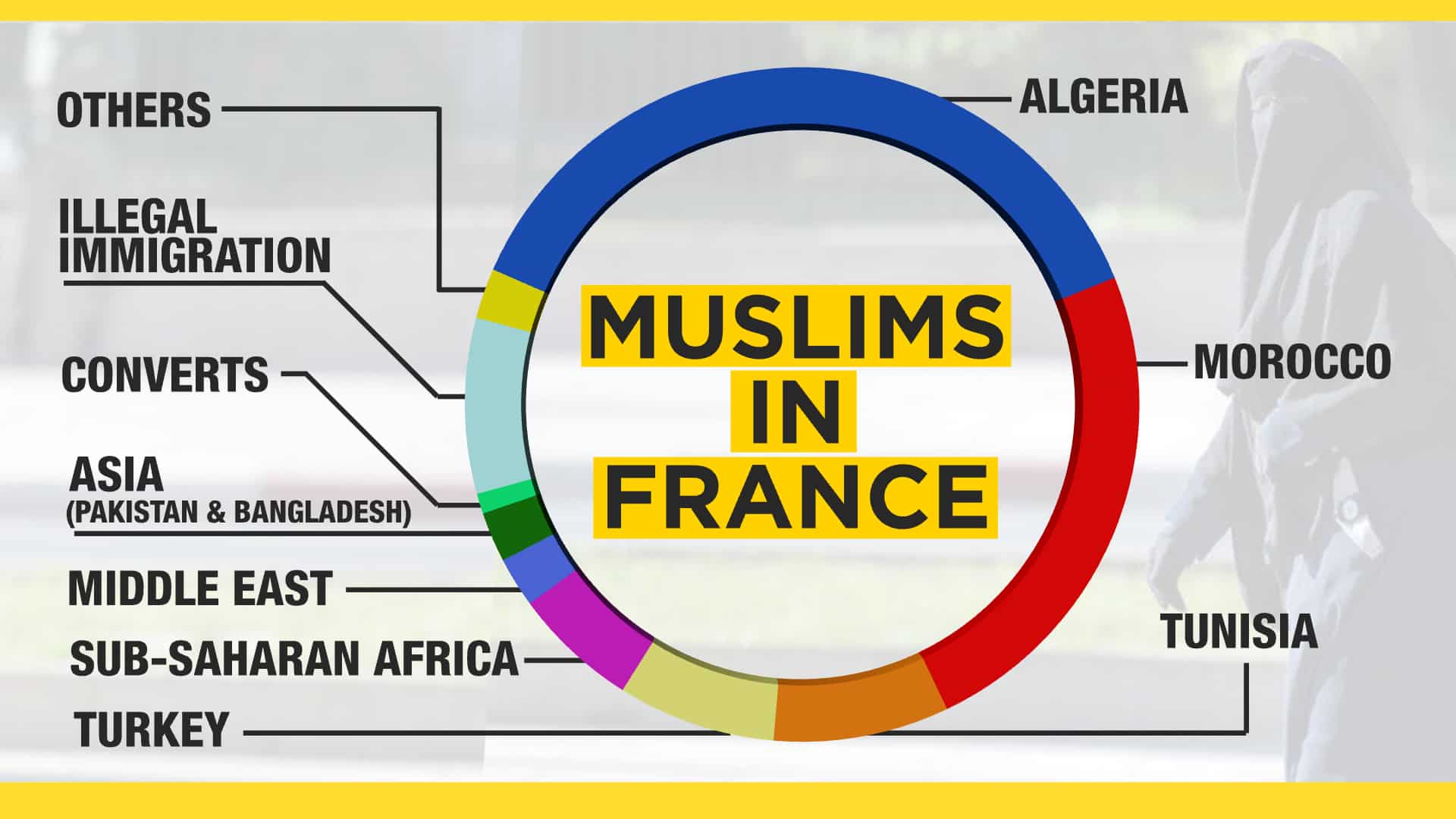 How did Islam take centre-stage in French politics? 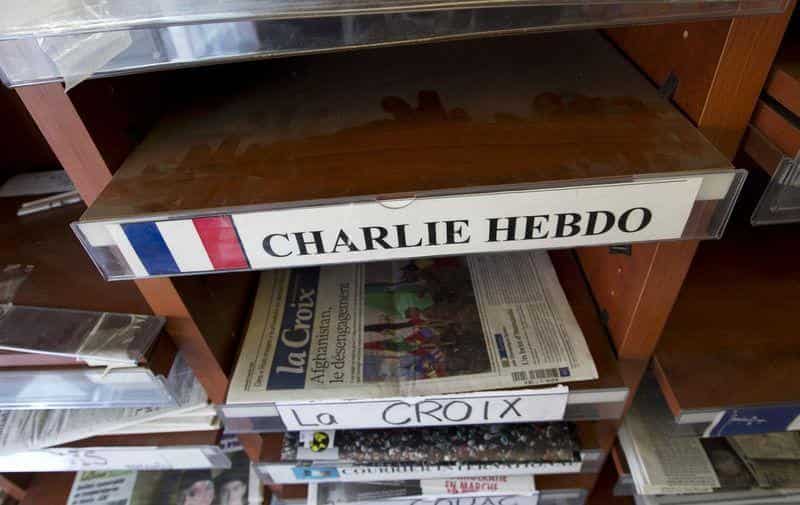 There were spats all along the ’90s and early 2000s. But 2015 was a turning point for France. The terrorist attack against the staff of satirical magazine Charlie Hebdo shook the republic to its core. Since then, the country has faced a succession of such attacks by Islamist groups.

The country has been grappling with one question – “why has France become a target”. If you ask the Right, they immediately blame immigration. The Left slams the ‘inept’ policies posed to fight terrorism. And for the Centre, it is the ideals. Incumbent President Emmanuel Macron strongly believes that separatists see France as a fertile ground to propagate radicalism. Paris is a strong contender for ‘freedom of expression & right to believe’, and these are ideals that go against the playbook of Islamists.

So to combat this growing hostility, the French parliament has approved exceptional measures, which have led to thousands of crackdowns, raids and house arrests. But in the process of hunting down separatists, French authorities have disproportionately targetted innocent Muslims. The signs of totalitarianism begin at the margins – but rarely do they end there.

Over the years, security concerns have shifted from domestic threats to global terrorism. The 2015 Paris gun assault and 2020 Nice knife attack show that while there is an allegiance to global terror groups, mostly the perpetrators are young Muslim men living in France. So why has the European nation become such a prominent target for homegrown Islamist terrorism?

Firstly, France’s long history of colonising Muslim countries is hurting contemporary times. While under French rule, Muslims were robbed of their identity. Many jihadists see this as a reason to target the European republic.

Secondly, French institutions have failed to fully embrace Muslims. Their close to non-existent integration policies have pushed the immigrants into the suburbs. Even second and third generations of immigrants are seen as ‘less-French’ by the natives.

An obsession with politicising Islam

France’s obsession with Islam is based on Laicite – which roughly translates to secularism. The concept relies on a division between the state and private spheres. And, religion has no place in public spaces.

“The Republic does not recognize any religion but protects the freedom of conscience and worship”, says Laicite.

It was passed in 1905 to separate the Catholic church and the French republic.

Over the years, this concept has been in confrontation with many religious practices, like Sikhs and Jews. But the biggest tiff has been with the minority Muslim community.

The principle came into existence to defend religious freedom. But in recent times, leaders have interpreted the concept very differently. Laicite is being used as an instrument to target religious identity. From dictating dress code to tampering with religious education. 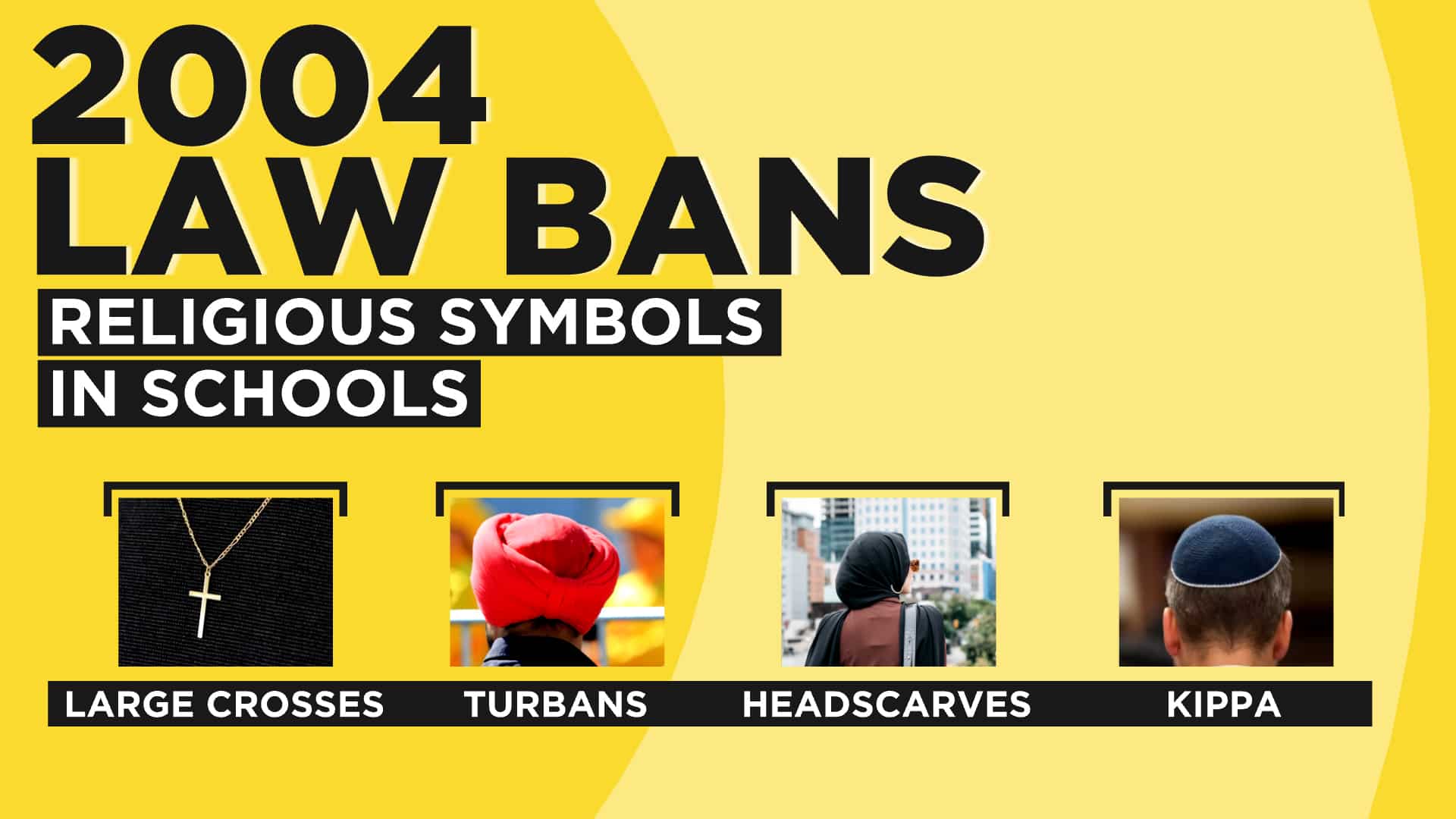 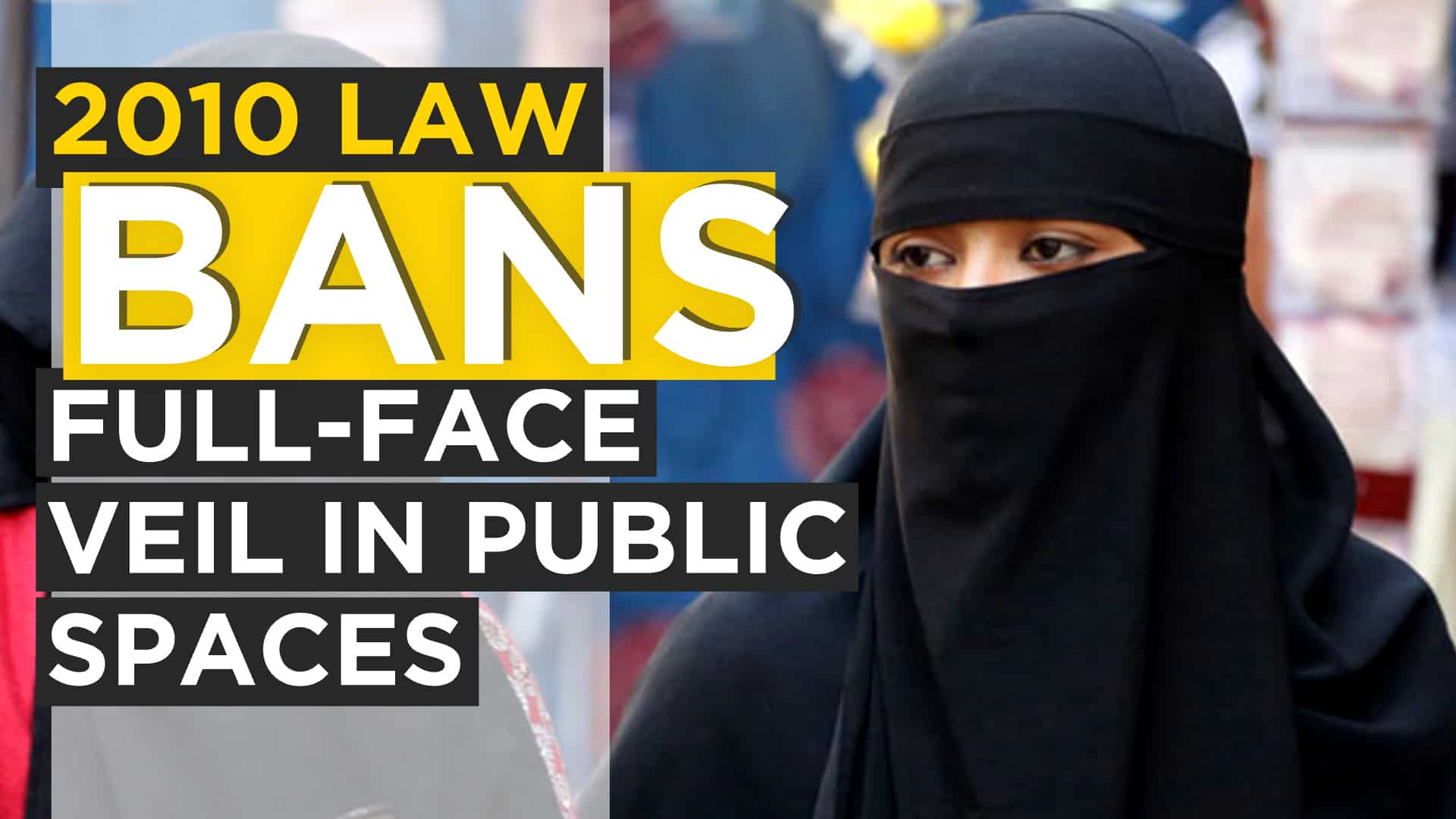 Like any far-right leader, Marine Le Pen is painting a picture where the majority is in some sense of danger. Her anti-immigrant and anti-Islamic attitudes are wrapped in the garb of French culture.

The daughter of an infamous nationalist politician who repeatedly spoke of Nazi gas chambers and the Holocaust as "a detail of the history of the Second World War", she has spent years trying to escape Jean-Marie Le Pen's toxic shadow.

This is her third attempt at the presidency. In the past few days, she has appeared the softest public version of herself to woo the left. Le pen has described the hijab as an “Islamist uniform imposed by people who have a radical vision of Islam.” These controversial statements have garnered her popularity. Her position in the current run-off signifies that things are changing in France. Divisive rhetoric holds political currency. Today, the country stands polarised like never before.

On the other hand, the centrist Emmanuel Macron has announced a ‘French makeover of Islam’, which means that practicing of faith will be regulated by the state. The aim is to integrate French Muslim citizens better with the French way of life. This is confusing to many because state-assigned leaders have struggled to gain community recognition. And ‘French Islam’ stands against the superseding principle of Laicite. Many experts believe that Macron is failing to see the irony. Days before schoolteacher Samuel Paty’s killing in 2020, Macron made a controversial statement. “Islam is a religion that is in crisis today all over the world. It is plagued by radical temptations and by a yearning for a reinvented jihad which is the destruction of the other.”

These comments did not sit well with the Islamic world. Protests broke out across West Asia and angry Muslims burned French products.

Defending his ban on headscarves in schools, Macron has said in his latest presidential debate that the decision aims to “shape minds for the future.” One might ask, how exactly a veil distracts from that aim.

France is a country with a large, poor, unintegrated Muslim population that feels that its identity and religion are under attack by its host state.

Politicians have done very little to divert fear and anger from the terror attacks that have plagued French society. The millions of innocent French Muslims have paid the price through xenophobia. According to a 2019 Report on International Religious Freedom,

“42% of Muslims declared having experienced discrimination due to their religion, a figure which rises to 60% among women who wear a headscarf”. Independent polling puts the figure at a much higher rate.

Islam is followed by less than 9% of French people, but it continues to dominate debates in public spaces & prime time TV – without any voice from the community, especially hijabi women.

For Muslims today, voting is like Hobson’s choice. They have two leaders from opposing spectrum of ideologies, yet their vision of Islam is the same. Both Macron & Le Pen wish for a ‘French way of life’, where religion cannot be celebrated unless permitted to. A good Muslim will always be invisible to the eye. And for generations to come, French Muslims will have to prove their ‘Frenchness’ everywhere they go. 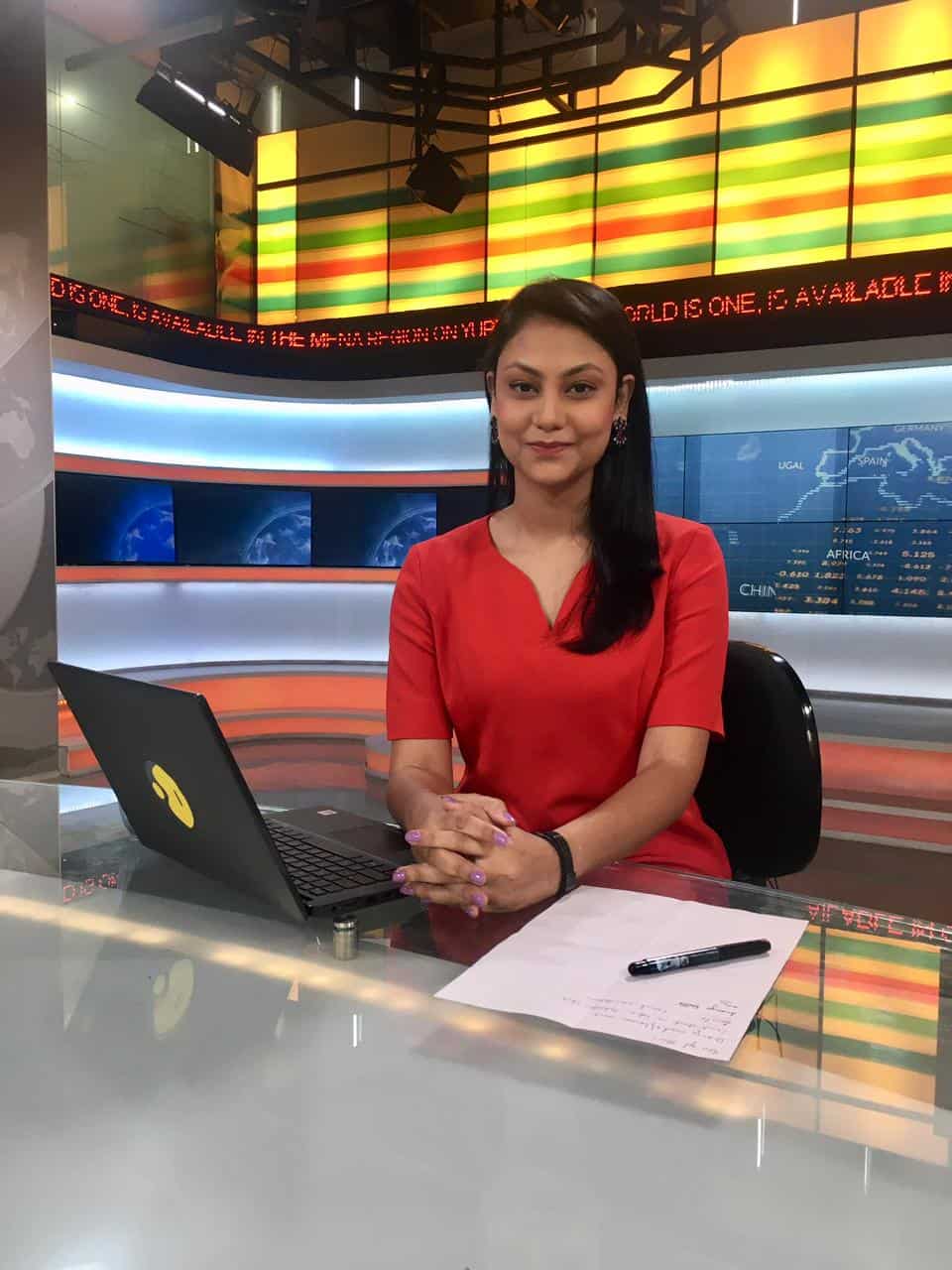 She loves covering conflicts and geopolitics. But when not at work, she mulls over adopting every single dog that comes her way!