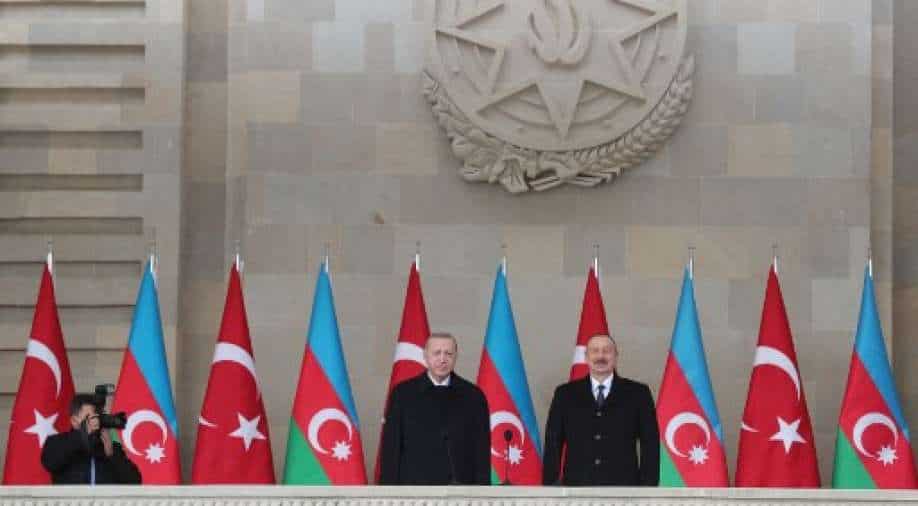 Erdogan openly supported oil-rich Azerbaijan as other world leaders called for a ceasefire amid rising military and civilian casualties on both sides.

During his recent visit to Baku, Turkish President Recep Tayyip Erdogan declared that Azerbaijan’s struggle with Armenia was not over yet. He said: “the fight carried out in the political and military areas will continue from now on many other fronts.”

Erdogan was attending a military parade that Azerbaijan had organised to mark its victory over Armenia in the Nagorno-Karabakh war.

On display were weapons seized from Armenia as well as Turkish drones which gave Azerbaijan an upper hand in the fighting which has claimed over 5,000 lives.

It will be an understatement to say that Baku would not have been able to win without Turkish help.

While Nagorno-Karabakh is internationally recognized as part of Azerbaijan, it has been dominated by ethnic Armenians.

Erdogan openly supported oil-rich Azerbaijan as other world leaders called for a ceasefire amid rising military and civilian casualties on both sides.

Syrian fighters also played a decisive role in the conflict. Turkey denied that it recruited mercenaries to fight for Azerbaijan but many reports have indicated that they were present on the ground.

While Turkey considers Azerbaijan a brotherly nation, it has had strained relations with Armenia.

They don’t have diplomatic ties. A major issue between the two neighbours is Ankara’s denial to recognise the mass killing of Armenians during the Ottoman rule in the 20th century, as genocide.

The relations only deteriorated as Turkey put its weight behind Azerbaijan.

Fighting in Nagorno-Karabakh erupted on September 27 and was marked by multiple ceasefire violations, before ending in a Russia-brokered truce on November 9.

Russia has enjoyed good relations with both Armenia and Azerbaijan which are former Soviet nations.

As part of the peace agreement, Armenia returned territories to Azerbaijan that it seized in the 1990s.

Over 2,000 Russian troops are overseeing the handover and the resettlement of Azeris in Karabakh.

But peace remains elusive. Despite the truce, there have been clashes. According to reports, Azeri forces have captured Armenian soldiers in a raid.

While the Moscow-brokered deal ended the fighting, it left Nagorno-Karabakh's political status in limbo.

Russian troops have been stationed in the region for a period of five years which can be renewed.

All these factors leave scope for negotiation between Armenia and Azerbaijan.

This is where Ankara’s increasing involvement in Karabakh further complicates the situation. Azerbaijan which has gained military superiority due to Turkish support may not be very open to a diplomatic solution.

Armenia is also unlikely to join a peace process involving Turkey, due to tensions between the two nations and also because of Ankara’s unanimous support for Baku.