Discovering India with Alyson Le Grange: The boy in the red turban 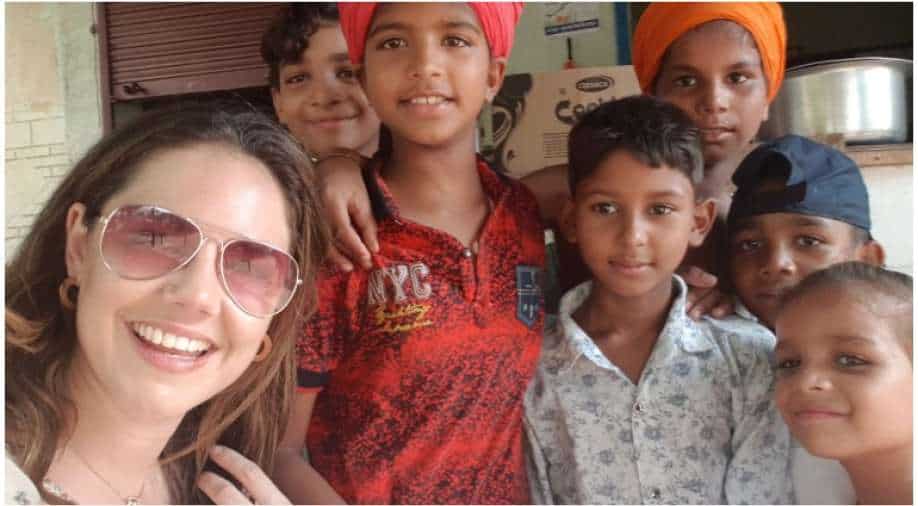 So, here I was, A South African girl, with little knowledge of India, no communication skills in the native tongue, sitting on a chair, in a small shop that was located on the side of the highway pretty much in the middle of nowhere in the hinterland of Punjab. For a moment I nearly gave in to panic but something kept me together

It’s one of those experiences you can’t Not have when visiting Amritsar. Even if you haven’t heard of the Beating-the-Retreat ceremony (and I suppose most foreigners haven’t) you will definitely wonder what the fuss is about because every tuk-tuk driver on the streets of the city will offer to take you to Wagah—a drive of half-an-hour from Amritsar at the India-Pakistan border—and bring you back, for varying sums of money.

The ceremony that involves lowering of flags and a spirited display by soldiers of India and Pakistan, was instituted in 1959, and takes place before sunset every day. It’s quite the highlight for visitors to Amritsar and was certainly on my itinerary.

I left the Golden Temple filled with a sense of peace…a strange calm, not sure how to articulate it. I think a kind of quiet confidence comes close to describing how I felt. 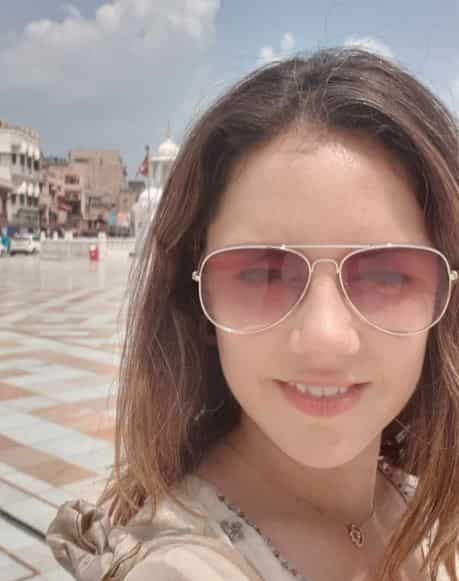 Hubris creeps up on you when you aren’t careful, and then, something happens that brings you back to mother Earth…my thoughts were interrupted by yet another gentleman offering to take me to the border. He seemed quite expensive but I was too exhausted to scout for a better deal and I felt that I really wanted to travel in comfort especially after the tough time I had been having and after being on my feet for hours at the Golden Temple—this was during the north-Indian summer with the mercury soaring well over 40 degrees Celsius—I decided to give myself a break. The prospect of having an entire ‘air-conditioned car’ to myself, seemed too good to resist.

Not only that, but the man also kindly threw in a visit to a temple and a lunch at a famous ‘dhaba’—roadside eatery—in the package before dropping me back to the hotel.

I felt like I had managed to arrange another wonderful experience, I felt like things were flowing, like maybe I must have tapped into something during my Golden Temple experience.

A friend of mine once remarked that I have very ‘strange luck’, and, now that I think about it, I think that she meant that the big picture, when it reveals itself to me, finally helps me make sense of events that did not seem particularly fun when they occurred. I suppose that's the same for most of us. On this occasion, things were going well enough until Ash, my driver, who'd asked me to wait while he pulled the car out, disappeared. My Hindi was basic at that point and Ash’s English, well, was worse than my Hindi. I was waiting for a while and just when I began wondering if I had, in fact, been conned, that a vehicle came sputtering along in my direction.

Now, this wasn’t exactly the fancy ride I’d been expecting; it was a jeep all right but looked a bit like the original article—the very first jeep ever produced. Just when I was hoping this wasn’t my ride Ash leaned out of the window and gestured that I should hop in. At this point, I had serious reservations, but Ash looked so eager and excited that I didn’t want to pour cold water on his plans. So it was, in an ancient jalopy, which looked like it might fall apart any minute and in fact the cubby hole fell off and landed on my leg, that the two of us began our journey to the Wagah border.

Our first stop was at a temple in a place called Mahindra Colony. Beautifully ornate, and decorated with stone carvings of deities, it was a great start and had me feeling somewhat mollified with the way things were going.

But I was hungry; it was already late afternoon and I’m not ashamed to admit that I get notoriously grumpy on an empty stomach.

Ash noticed my impatience and indicated that our next stop was for lunch, which was a relief. Just when I was thinking about the delicious Punjabi food I’d order when, exactly what I’d been afraid of happened: our venerable ride, decided it had had enough, sputtered, wheezed, and died.

I looked over at Ash as he guided the freewheeling vehicle to a stop by the curb; he looked somewhat bewildered, as if confused about what had just happened. I couldn’t understand what he was trying to explain to me (in Hindi, or Punjabi I’m not sure) but I was quite certain that the argument had no merit. This was not good.

We looked at each other blankly for a while before he motioned for me to disembark from the car and led me to a room-sized metal box on the roadside masquerading as a shop.

There were boxes of sweets, packets of cigarettes, and a tiny fridge stocked with fizzy drinks. The proprietor was lounging a little way away; Ash roused him and asked, presumably, if I could use the solitary chair facing a small fan to wait.

So, here I was, A South African girl, with little knowledge of India, no communication skills in the native tongue, sitting on a chair, in a small shop that was located on the side of the highway pretty much in the middle of nowhere in the hinterland of Punjab. For a moment I nearly gave in to panic but something kept me together. Maybe it was the epiphany I’d had at the Golden Temple, the inner peace I felt had not left me and I began to consider my situation rationally. I reached for my phone to call for help and realised, to my despair, that it had zero connectivity. I looked over at Ash, who pulled out his phone (that appeared to be the same vintage as our jeep) and shrugged—his phone was of no use either.

This was the point that the edifice started crumbling. In spite of my best efforts, panic began to set in. I began walking up and down, holding my phone in the air as high as I could to get some signal. I could no longer see my driver; Ash had disappeared, presumably to get help, he hadn’t said a word to me and as I sat on that little chair, I felt at a complete loss. Unsure of what to do next, unsure of what lay in store.

It was at this moment that the universe took pity on me. From the corner of my eye I noticed curious little faces peering at me from around the corner of a wall.  These children, obviously fascinated by this unexpected visitor slowly overcame their fear and inched closer to me. I suppose they must have been between five-to-twelve years old, and they looked so sweet and inquisitive that I momentarily forgot my predicament and gave them a big smile. I could imagine how strange I must have looked to them: a white woman, wearing traditional Indian wear, headscarf and big glasses, blonde hair sticking out from beneath the scarf. Encouraged by my smile, they grew brave, came right over, and said hello. 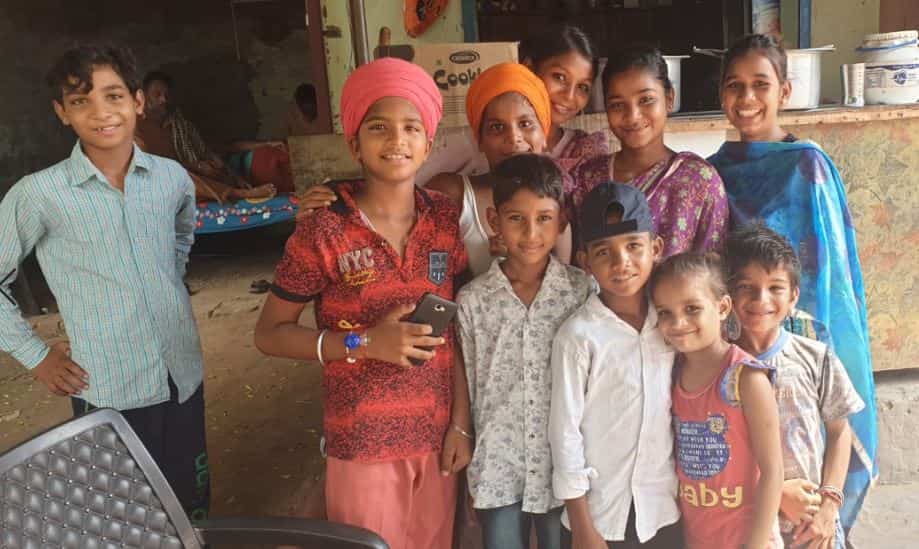 They had obviously seen me prancing up and down vainly seeking mobile connectivity. One little boy in a red turban whipped out his phone and came up to me with both hands outstretched, his phone in one hand and I handed him mine. He quickly linked my phone to his mobile hotspot and returned it to me.

I was back!  Connected to the world at large!

My phone started buzzing off the hook and I quickly called Naresh, Ash’s boss, and told him what had happened. It turned out that Ash had already been there and was on his way back to me in a new vehicle. I was so relieved I could have cried.

The children and I spent the next 20 minutes or so, taking selfies. There was a little girl named Khushi (which I was told later means happiness) and that kind kind little boy who had been my knight in shining armor. I offered him some money for his help that I regretted immediately as he shyly recoiled from the offer. I bought all the sweets in the shop for the children and that’s when Ash rolled in—this time driving a shiny new jeep.

I got in, and my heart grew heavy as I waved goodbye to the children who waved and chased the car for as long as they could, as we resumed our journey.

I don’t think they realised that they’d saved me, re-instated my faith in the inherent goodness of humanity as it were. That little boy’s actions not only allowed me to get in touch with who I needed to but restored my belief that the human connection—one that transcends language, countries, and cultures,—is the one connection that we can always count on. That moment I felt, even in such a foreign place, that I was not alone. And that feeling was worth everything.

With these thoughts running in my head, I barely noticed as we rolled into the ‘Lahore Dhaba’ for lunch. My hunger pangs which had subsided in the wake of my predicament came rushing back with a vengeance. Now I don’t have to tell you, dear reader, just how delicious Punjabi food, especially in Amritsar, can be, but at that moment, it was, by far, the most delectable meal I’ve ever had. Feeling full and refreshed, I continued on my journey.