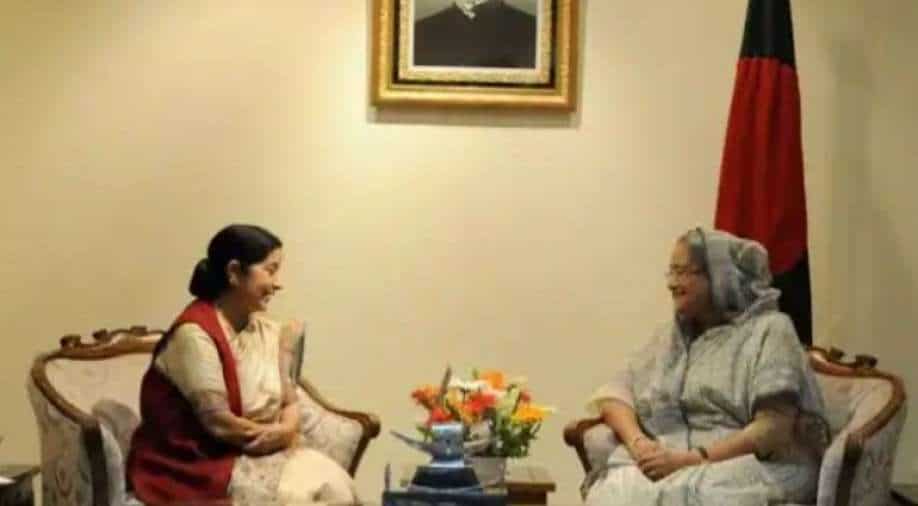 The 'saree diplomacy' bears a deeper significance for India and Bangladesh, for it established the contribution of women into strengthening of diplomatic relations besides cementing bilateral ties.

Back in June 2014, the late Sushma Swaraj steered the diplomatic relations of India with its friendly neighbour on to an unfamiliar but familial road: the saree route.

It was her first standalone overseas visit after taking office as India's external affairs minister, and Swaraj, known for her knack of outwitting her opponents by sheer grace, and presence of mind, overwhelmed Bangladesh and its premier with the Indian warmth.

Prime Minister of Bangladesh, Sheikh Hasina, departed from protocol on June 26, 2014, and received Swaraj at the reception of her office. She hugged Swaraj and warmly greeted her.

Swaraj then presented an off-white saree to Hasina that she herself had chosen for her -- the start of sisterhood between two fierce and strong women.

Hasina reciprocated the gesture and gifted the famous Jamdani saree to Swaraj.

This had come after Prime Minister Narendra Modi's shawl diplomacy -- wherein after his swearing-in ceremony in May, he gifted a shawl to the then prime minister of Pakistan, Nawaz Sharif, an invitee at the event. In a reciprocal gesture, Sharif gifted a saree to Modi for his mother. 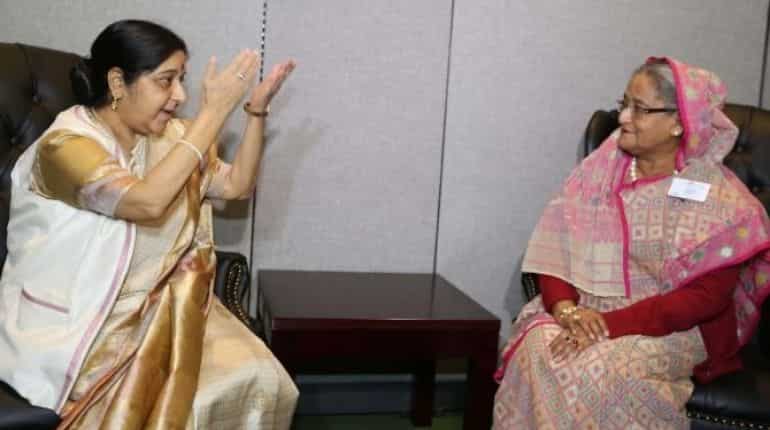 The 'saree diplomacy' -- as many term it -- however, bore a deeper significance for  India and Bangladesh. It established the contribution of women into strengthening of diplomatic relations besides cementing bilateral ties.

The 'saree diplomacy' was furthered on the second day of Swaraj's visit when she was presented with two Jamdani sarees by Khaleda Zia, former prime minister and the chairperson of the main opposition Bangladesh Nationalist Party.

"Madam Zia brought with her two Jamdani sarees as she called on the Indian external affairs minister – one was for Sushma Swaraj and another for her daughter," Zia's press secretary Maruf Kamal Sohel had said at the time.

Sheikh Hasina had then already made the right noises by asking Modi to consider Bangladesh as his second home. But the 'saree diplomacy' revolutionised the New Delhi-Dhaka relationship.

Sushma Swaraj had then described her three-day visit to Bangladesh as very "fruitful and successful".

Swaraj also handed over Prime Minister Narendra Modi’s letter to Hasina in which the Indian PM thanked his Bangladeshi counterpart for her felicitations and expressed his desire to work together to ”ignite collective surge to prosperity” in South Asia.

Besides meeting Hasina, Swaraj held wide-ranging discussions with her Bangladeshi counterpart AH Mahmood Ali. Her last engagement in Dhaka was a 45-minute meeting with Raushan Ershad of Jatiya Party, who was also the Leader of the Opposition in Parliament.

A talking point for Swaraj was India’s decision to relax visa norms for minors and senior citizens, and to supply to additional 100 MW power from Tripura.

Two other issues on the table were the Land Border Agreement, which had then been vetoed by the Assam government as well as the local Assamese unit of the Bharatiya Janata Party and the proposed Teesta water sharing agreement that had been vetoed by the then Mamata Banerjee-government in West Bengal.

Increase in the frequency of Dhaka-Kolkata Maitree Express and introduction of a bus service on the Dhaka-Shillong-Guwahati route also figured in the talks.

Sushma Swaraj rounded off her two-day visit to Dhaka with a prayer at the Dhakeswari National Temple.

Coinciding with Sushma Swaraj’s visit to Bangladesh, border guards of the two countries met near Siliguri on June 25, 2014 and started their three-day long border coordination conference.

The 'saree diplomacy' of June, 2014 set the stage for more heart-to-heart talks between India and Bangladesh -- the most recent and the most anticipated one being Indian PM Modi's 2021 visit to Bangladesh.

Modi -- now in his second term as India's premier -- is visiting Bangladesh on March 26 and 27 on the invitation of Bangladesh PM Hasina. He will participate in the Bangladesh National Day celebrations on Friday.

The two prime ministers also held a virtual summit on December 17, 2020 -- in which Modi said Bangladesh was a key pillar of New Delhi's 'Neighbourhood First' policy, while Hasina described India as a "true friend".

The two countries also inked seven agreements to further broadbase cooperation in a plethora of sectors, and restored a cross-border rail link snapped by the 1965 war with Pakistan.