Delighted that PM of biggest democracy is joining our independence celebration: Bangladesh FM 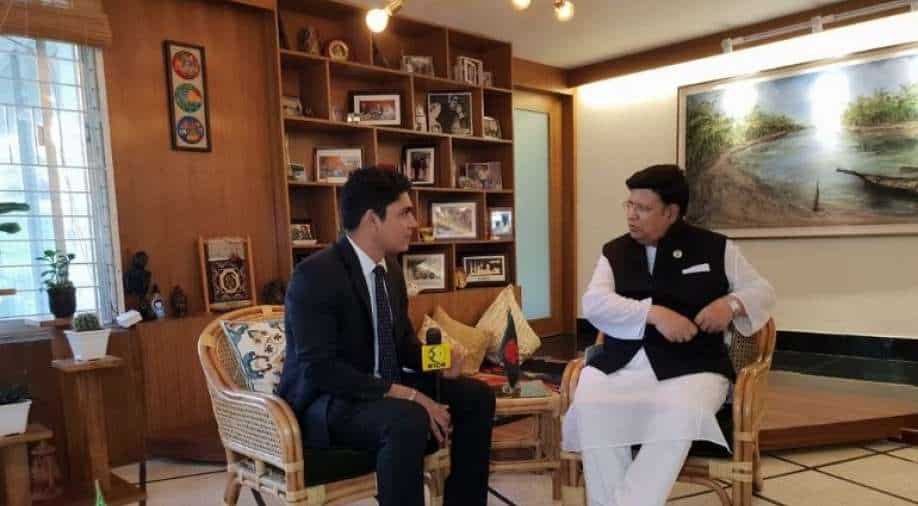 Speaking exclusively to our WION, Momen said,"Our relationship with India was rock solid."

Indian PM Modi will be travelling outside Dhaka as well during his two day Bangladesh visit starting today. This is his first visit abroad in more than a year. The Bangladeshi FM also thanked India for giving vaccines. He said, "We developed such a good relation and inspite of certain difficulties in India, the government honoured its commitments."

WION: What is the main focus of this visit?

Momen: The main focus of the visit is observing 50th anniversary of Bangladesh's independence, and also Mujib Barso - the 100th anniversary of father of the nation Sheikh Mujibur Rahman. We are very delighted that Narendra Modi, the PM of the biggest democracy in the world is joining us in these two great events... We are very pleased the largest democracy is honouring Bangabandhu. Bangladesh and India worked very hard, and many Indian soldiers shed blood for our independence. So our victory is also India's victory. Bangladesh and India are jointly observing this great historical event. In addition, this year 2021, Bangladesh has met all categories to graduate from LDC country. With 50 years of diplomatic relations with India, we are observing so many events together.

WION: How do you characterise this relationship?

Momen: Our relationship with India was rock solid. During war of Independence, both Bangladesh and India worked together, jointly. Now again, PM Modi and Bangladesh PM have developed height of diplomatic maturity, marking a true Shonali Addhya or Golden Phase because these are two neighbouring countries. All neighbouring countries, all across the world have problem.s But here, with India we have 4000 km of border, and India is big country and the good news is because of the good relations we have resolved most of the major problems between Bangladesh and India amicably. We have resolved our land boundary arrangement, resolved our maritime boundary issues, we have resolved sharing of waters of major rivers via dialogue and discussion. Not a single bullet was shot to achieve any of those. We have big problems which we have resolved and also, India is happy because their eastern border is secure. With a friend like Bangladesh, India doesn't have to worry. Both the countries are gainers. We believe, our PM believes, connectivity is productivity and it is vision of our father of nation. His vision was Bangladesh would be Switzerland of east, an island of peace and it will emit spirit of peace across the world. He also believed that a country can't prosper without peace and stability. That is what PM Hasina is doing, because it is a stable government and she is emitting gospel of peace across the world. India is with us together in the campaign for greater government to government, people to people connectivity and developing a rock solid relationship with our neighbour.

WION: PM will go beyond Dhaka; how do you see that?

Momen: PM Modi is going outside Dhaka, including, Tungipara. It has the mausoleum of the father of the nation. He will show his respect. Also, he will visit two other places - Satkhira, another is Orakandi. India will also provide a lot of deliverables. This is his first visit abroad after COVID-19. That means he is giving lot of respect to Bangladesh. We are also reciprocating.

WION: Any announcement on connectivity - a key focal point?

Momen: We will open the Swadhinta Sadak, a road leading from Nadia to Mujib Nagar. This is a historic event. In 1971, on April 17, 17 vehicles from Calcutta took all our leaders, and international journalists. They came to Mujibnagar. The exile govt was established in Mujibnagar, where this road leads. We have a railway from Haldibari to Chilahati, which opened after 75 years. It is open for cargo, and now it will be open for passengers. Once it opens, we can move further. Connectivity is not just rail but also via road, air, railway, and river ways.

We would like to move forward. I am from Sylhet, and my mother used to tell me that in that area, we have a big Mazar of a saint known as Hazrat Shah Jalal. In his Mazar, there are big utensils for cooking. We used to tell our mother, how such big utensils came. They came from Delhi, and legend has it, they came via river. My grandparents used to take the river route when they used to go to Calcutta. That is the norm. There was no railway, no flight, no road. So many rivers come from India, and it is time to open up all the river routes. Transport will be cost effective and it will be easier for our people to move around and we will follow the natural law of rivers. There are 54 rivers that come from India, we are working on six of them, plus Teesta. Our prime minister has a vision that the whole region has to develop. This can be done, together in partnership and collaboration. Happy we got good friend like PM Modi who is with our PM in meeting the same mission, developing the whole region as one.

WION: How do you see India's vaccine outreach?

Momen: This pandemic is a disaster and we did not know much about it. When it came, some of the experts projected that 5-10 million death will happen in Bangladesh due to the pandemic. Bangladesh is a very congested and highly densely populated country. We had lot of fear, naturally our PM Hasina took all the initiatives to avert the crisis. She has been successful. When we heard that vaccine is likely to come, immediately Bangladesh took certain positive steps. First, when we heard vaccine will be created, Bangladesh joined the movement and paid for it. We paid to European Union and had one condition, that vaccine should be considered a public good and should be available to everyone without any discrimination. Rich and poor, everyone should have access to vaccine. Then we came to know, vaccine is being produced in India in cooperation with the Oxford AstraZeneca. Immediately, we requested the company that we would like to be part of it. India agreed and assured that whenever India gets the vaccine, Bangladesh will also get the vaccine. Initially we asked for 30 million vaccines and we paid for it fully. Indian government agreed to sell those 30 million and sent 2 million as gift. We developed such a good relation and inspite of certain difficulties in India, Indian govt honoured its commitments. Each month we getting 5 million pieces of vaccines. In addition, India has offered India's indigenous vaccine - Bharat Biotech.