What exactly does the Congress manifesto say? 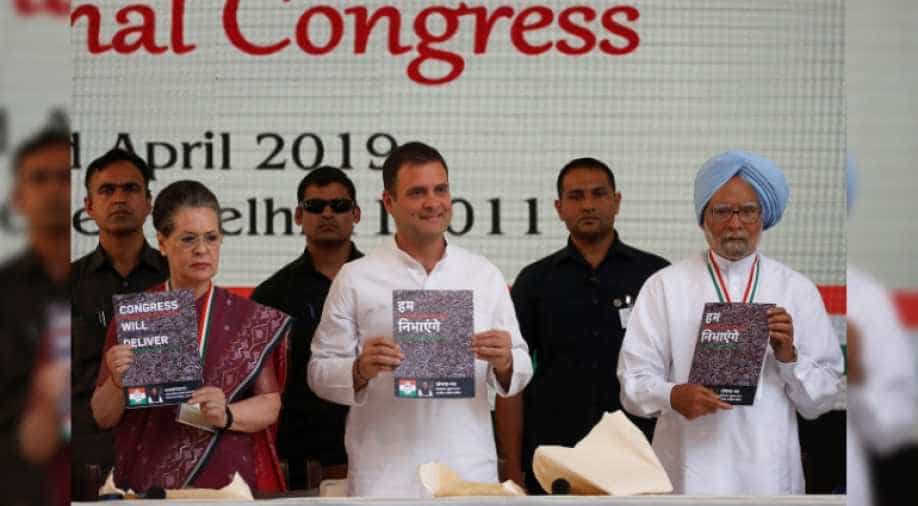 The BJP was quick to say that some of the ideas in the Congress manifesto released Tuesday were 'positively dangerous'. The Congress retorted that it was 'what the people of India want'

The Congress released its manifesto for the upcoming Lok Sabha elections on Tuesday, and the BJP was quick to say some of the ideas in it were "positively dangerous".

Union Finance Minister Arun Jaitley went so far as to say some of the ideas in the manifesto were "an agenda for the Balkanisation of India" and that they looked like the had been written by Congress president Rahul Gandhi's "friends in the tukde-tukde gang".

Jaitley was by and larger referring to what the Congress manifesto says about  Kashmir — that there will be no tinkering with its constitutional status, that AFSPA will be reviewed, and that there will be fewer soldiers — and more policemen instead — deployed in the Valley.

This was expected. The BJP has been focusing tremendous amounts of attention on national security ever since the Pulwama suicide attack that left 40 CRPF personnel dead and the consequent Indian Air Force air strike on a Jaish-e-Mohammed training camp in Pakistan's Balakote.

But what else does the 55-page long Congress manifesto called "Hum Nibhayenge" or "We Will Deliver" say?

Here are the salient points:

The big Congress scheme of course is NYAY which envisages the giving of Rs 72,000 a year to 20% or 5 crore of India's poorest families.

On Tuesday the Congress said it would also present a separate budget for farmers. The Congress would like to keep the focus on rural distress and joblessness. It therefore announced Tuesday that it would fill up 22 lakh government vacancies.

The Congress Tuesday promised to put farmers on the path from "karz maafi" (loan waiver) to "karz mukti" (freedom from loans).

This the party said would be done through remunerative pricing, lower input costs, and assured access to institutional credit.

Rahul Gandhi, speaking at the release of the manifesto at Congress headquarters in Delhi, said his party would allocate 6 per cent of GDP to education, strengthening government hospitals and providing high-quality healthcare access to the poor if voted to power.

The party also promised to enact the Right to Healthcare Act and guarantee every citizen free diagnostics, out-patient care, free medicines and hospitalisation, through a network of public hospitals and enlisted private hospitals.

To the youth of India, the Congress pledged to make jobs its top priority, saying it would ensure 34 lakh jobs in the public sector by filling all 4 lakh central government vacancies before March 2020, persuading state governments to fill 20 lakh vacancies and creating an estimated 10 lakh new Seva Mitra positions in every gram panchayat and urban local bodies.

The party said it will also provide a fillip to the private sector by incentivising businesses for jobs creation and employing more women.

The Congress added Tuesday that would radically simplify the GST regime with a single moderate rate of tax, zero rating of exports, and an exemption for all essential goods and services.

It also promised panchayats and municipalities a share of GST revenues.

The Congress added that it would reverse the trend of declining defence spending under the NDA government, and increase it to meet the requirements of the armed forces.

On education, the Congress promised that school education from Class I to Class XII in all public schools would be compulsory and free.

And finally, the party promised to pass in the first session of the 17th Lok Sabha the Women's Reservation Bill reserving 33 percent of seats for women in the Lok Sabha and the State Legislative Assemblies.

"Congress will also reserve 33 percent of all posts/vacancies in the Central government for women," the party's manifesto added.