'We have leaders who continue to defend Laden as a martyr', India's UN envoy at UNSC 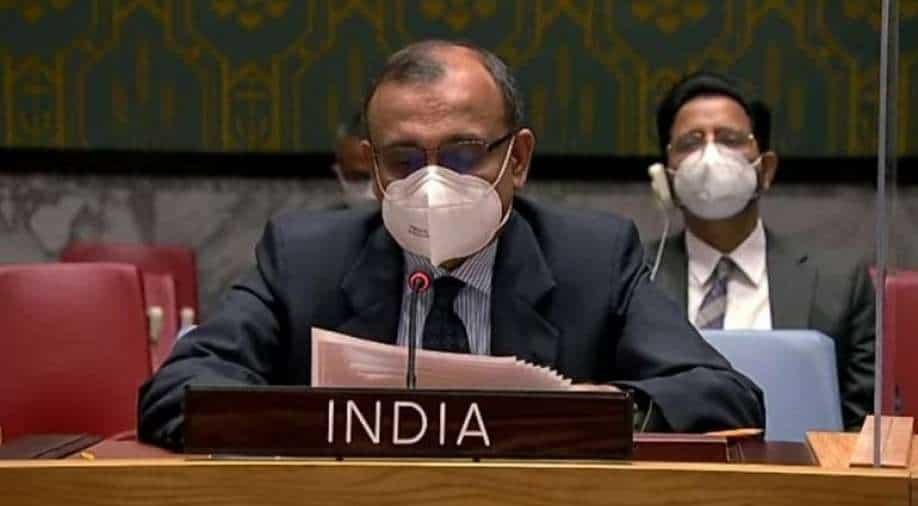 In this file photo, Indian envoy to United Nations T.S. Tirumurti can be seen Photograph:( Twitter )

Speaking at the UNSC meet, he said, "As a country that has long borne the brunt of cross-border terrorism, including the 2008 Mumbai terror attack and the 2016 Pathankot terror act, with victims of both these dastardly acts yet to get justice, India is acutely aware of the human cost of terrorism and remains fully committed to bringing the perpetrators of these terror attacks to justice."

Pakistan continues to drag its feet on taking action against 26/11 perpetrators, even after 10 years. The attack was carried by Pakistan-based terror group Lashkar-e-Taiba.

Speaking at UNSC Briefing on ‘Threat to International Peace and Security Caused by Terrorist Acts’, envoy Tirumurti, "We should not forget the fact that, even after 20 years of September 11 attacks, we have leaders who, without any remorse, continue to defend Osama Bin Laden as a martyr".

Bin Laden was killed by American forces in Pakistan's Abbottabad, a compound that was less than a mile away from the country's 70-year-old Pakistan Military Academy.

"We have been highlighting consistently the threat of terrorism in our neighborhood", India's UN envoy said, pointing, "these security fears have been further exacerbated by the changed political situation in Afghanistan." UNSC's Analytical Support and Sanctions Monitoring Team released earlier this month had raised concerns over continuous links between the Taliban, especially through the Haqqani Network, and Al Qaida.

The envoy said, "We have been reiterating the close links between proscribed terrorist entities under the 1267 Sanctions regime such as Lashkar-e-Taiba and other terror groups including the Jaish-e-Mohammad", however, "in spite of repeatedly flagging these concerns, the SG’s report has failed to take notice of these linkages".

He hoped that in future iterations of such reports, "inputs from all member states would be treated on an equal footing and an evidence-based and credible yardstick be applied by its authors." UN analytical report that was issued takes recommendations from various countries and is prone to politicization as well.

During the address, India also talked about the recent terror attacks through drones in UAE and Saudi Arabia, calling for the need to work "together to develop appropriate solutions" and "evolve global standards to address these threats." Both the west Asian countries have seen Yemen-based Houthis launching attacks. January saw a drone attack in UAE's capital Abu Dabhi in which 2 Indian Nationals also died.

India's external affairs minister Dr. S Jaishankar had given an eight-point action plan to the council to deal with terror last year. The key focus was on "no double standards" on dealing with the issue. Indian envoy Tirumurti is also the Chair of the Counter-Terrorism Committee (CTC) of the Security council.