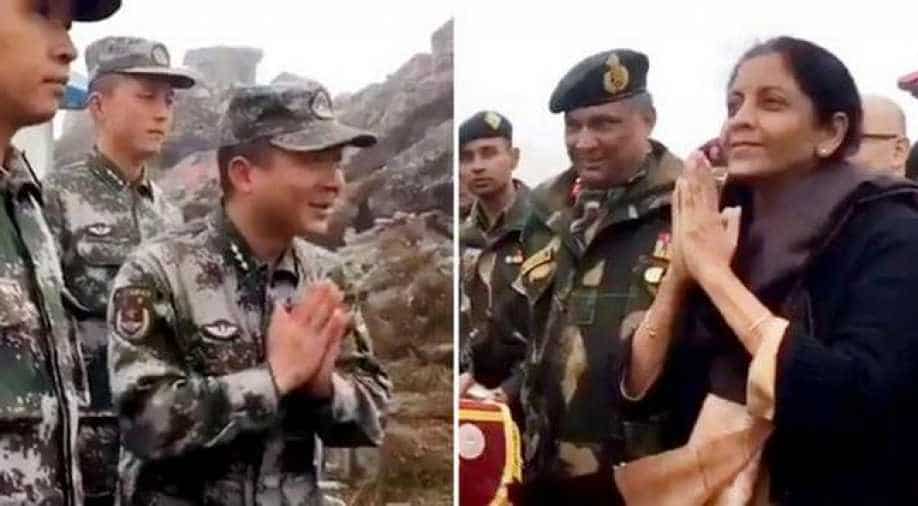 'Do you know what ?namaste? means?' Sitharaman asked the Chinese soldiers. They did; the Chinese equivalent they told her was 'Ni hao'. Photograph:( Twitter )

Indian defence minister Nirmala Sitharaman was seen sharing a laugh with Chinese soldiers, and teaching them how to say "namaste", on her first visit to the Nathu La border post in Sikkim.

Sharing another snippet from Smt @nsitharaman 's interaction with Chinese soldiers at the international border at Nathu-la, Sikkim pic.twitter.com/TIRdnhixeL

In the video, she can be heard asking the PLA personnel: “Do you know what ‘mamaste’ means?”

After a Chinese soldier says "Namaste means nice to meet you", Sitharaman goes on to ask “What would you say in Chinese?”

To which a Chinese soldier replies “Ni hao", much to the amusement of everybody present.

Nathu La is some 30 km from Doklam, where the Indian and Chinese armies recently faced-off from each other for 73 days.

Acknowledged a row of Chinese soldiers from across the fence who were taking pictures on my reaching Nathu La. @DefenceMinIndia pic.twitter.com/7cWImtmfLG

Sitharaman was visiting the area amidst reports that China had strengthened its military presence on the Doklam Plateau and had also started widening an existing road -- the Doklam standoff had been triggered by Chinese road-building activity -- some 12 km from the Doklam face-off site.