Watch: ISRO tests rocket booster that is among the largest-of-its-kind in the world 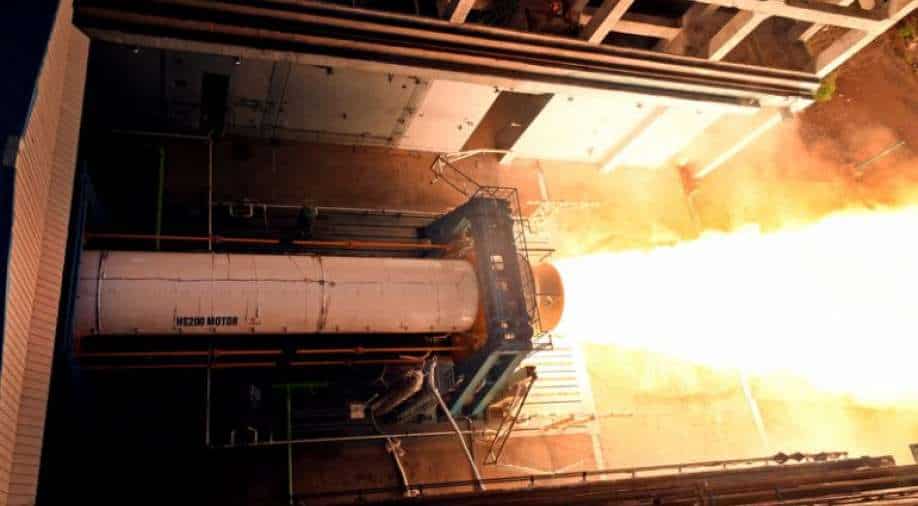 The HS200 booster test fired on Friday was loaded with 203 tonnes of solid propellant. Photograph:( WION )

The Indian Space Research Organisation(ISRO) successfully completed the maiden static test fire of its 'HS200' rocket booster at 7:20am on Friday at Satish Dhawan Space Centre in Sriharikota. This booster is a modified, human-rated version of the existing "S200" booster that is used on the Indian space agency's heaviest rocket, the GSLV Mk3. Friday's test is in line with the human-rating process, where the agency modifies the GSLV Mk3 rocket and its components for carrying astronauts. Simply put, the GSLV Mk3 rocket is a cargo hauler, meant to take satellites to space. It is now being modified and tested to be safe and suitable for carrying humans to space as part of India's Gaganyaan Human Spaceflight Programme.

WION spoke to Dr S. Unnikrishnan Nair, Director, Vikram Sarabhai Space Centre (VSSC) to understand the significance of the test. VSSC is the lead centre of the Indian Space Research Organisation (ISRO) and pioneers in rocket research and launch vehicle projects for ISRO.

According to Dr Nair, their teams had been working on making changes to the S200 rocket booster since 2019 and had improvised on small components such as ignitors, digital control electronics, and even went on to develop ISRO's largest electro-mechanical actuators. In this case, the electro-mechanical actuator will be used to steer the S200 booster's thrust and eventually the rocket's travel by adjusting the nozzle's direction. Friday's ground test involved the static firing of one solid booster for a duration of 135 seconds.

"Reducing chamber pressure, ensuring it is proof-leak, robust, and achieve higher margins, etc., are some of the changes we made to the S200 to increase its reliability as part of the human-rating process," Dr Nair said when queried about the difference between the existing S200 and the human-rated version. He also added that nearly 700 parameters (such as chamber pressure, thrust, shock, vibration, etc.) were monitored during the test and that everything turned out perfect. However, he said that the entire set of data would have to be closely examined to determine if another test of the same booster would be required.

The HS200 booster test fired on Friday was loaded with 203 tonnes of solid propellant. The booster measures 20 metres in length and 3.2 metres in diameter. It is the world’s 2nd largest operational booster that is fuelled by solid propellant. With the successful completion of this test, ISRO marches one more step closer to the Gaganyaan Programme.

Also read | 'Focus on how it will benefit India and the world' ISRO Chairman tells scientists, on upcoming Venus Mission

ISRO has been working on the ambitious Gaganyaan mission that involves demonstrating the indigenous capability to undertake human space flight missions to low Earth orbit and will lay the foundation for a sustained Indian human space exploration programme in the long run. As part of this programme, two unmanned missions and one manned mission have been approved by the government of India.

Notably, out of the three propulsion stages of GSLV Mk3, the human-rated versions of the second stage known as L110-G (loaded with liquid propellant) and the third stage C25-G (with cryogenic propellant) are in the final phase of qualification, including tests with static firing.