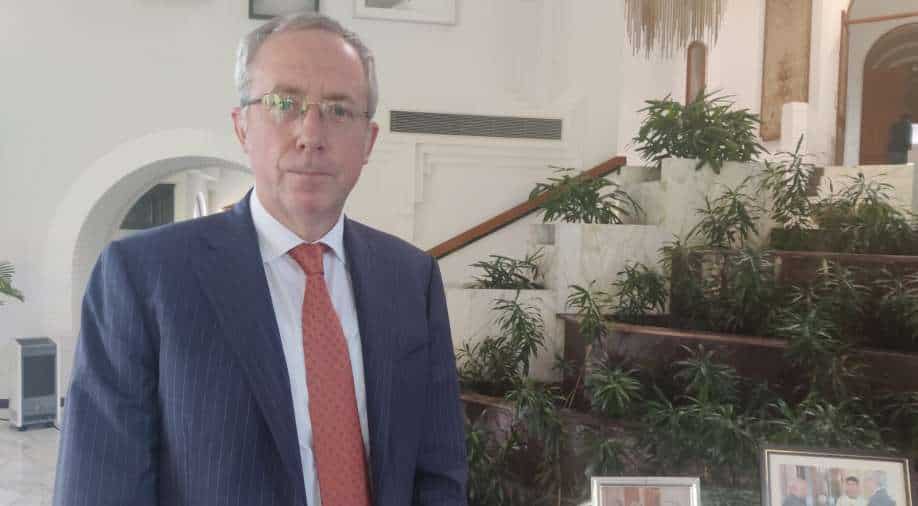 The Russian invasion of Ukraine is currently in its third week, creating Europe's worst refugee crisis since the end of World War 2.

Amid the Russian invasion of Ukraine, Belgium's Ambassador to India François Delhaye has said that his country has been asking to India to “clearly condemn war by Russia".

The Russian invasion of Ukraine is currently in its third week, creating Europe's worst refugee crisis since the end of World War 2.

Speaking to WION’s Principal Diplomatic Correspondent Sidhant Sibal exclusively, envoy Delhaye said, “We think, given the weight of India, also given its moral weight… any clear condemnation by India will make it clear to President of Russia that he has embarked on an operation which will lead him nowhere.”

India has a close relationship with both Europe and Russia. Earlier this week, Indian PM Modi spoke to both Ukraine and Russian presidents, urging them for direct talks, saying that dialogue is the only way forward.

Asked if a situation in Europe can divert attention from Indo Pacific, the envoy said, "As long as this war will last, and no one knows how long it will last, it will be impossible for Europe to focus what is happening in Asia."

WION: How do you see the situation right now in the aftermath of the Russian invasion of Ukraine?

François Delhaye: What we see is huge human suffering, we have the largest flow of refugees since the Second World War with 2 million refugees. We have seen the destruction of Ukraine, which is huge, and the suffering of people there. This is the first thing we see. The second thing which we see is the direct threat at the border of the EU. We see it as a situation which is unprecedented in nearly 80 years, which is extremely worrying.

WION: How do you see India's role in terms of evolving situation? We have seen what has happened at the UN, considering that India has a close relationship with Europe and Russia.

François Delhaye: We understand India's position. What we have been asking is for India to clearly condemn what is war, and war by Russia. We think given the weight of India, and the moral weight it carries, as India is a non-permanent member of the security council, any clear condemnation of what is happening now will have an enormous impact. It will probably in some way make clear to the President of Russia that he has embarked on an operation which will lead him to nowhere.

WION: Do you think Europe will now be less invested in Indo Pacific, given that war is creating a distraction?

François Delhaye: Yes, no doubt about it. As long as this war will last, and no one knows how long it will last, it will be impossible for Europe to focus on what is happening in Asia. It does not mean that situation in Asia is not a matter of great interest. It is. Challenges which we now see in Asia are important for the future but at the moment, all of Europe's resources are completed focused on what is happening at our doorstep.

WION: Do you see a de-escalation happening soon in Europe?

François Delhaye: It is really hard to tell. I think the situation did not develop as President Putin expected it, probably. What will be his choice, will it be more escalation or will it be de-escalation. It is something that cannot be foreseen, and we should be ready for all options.