'US is leaning a way forward' in meeting India's needs and aspirations in defence sector: Officials 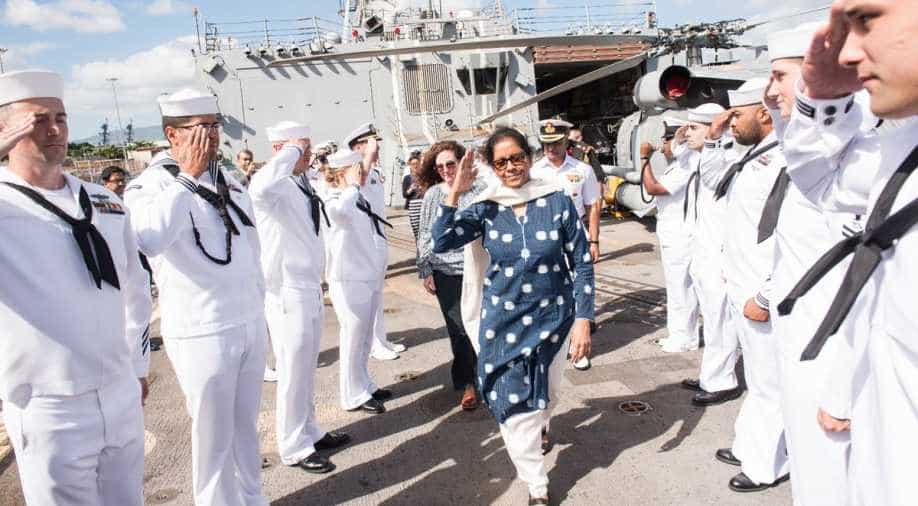 Sitharaman described her US visit as part of her endeavour to "take forward the bilateral defence cooperation".

India and the US are global partners in defence and regional security, a top US commander has said, as Defence Minister Nirmala Sitharaman toured the headquarters of the strategic Indo-Pacific command in Hawaii before concluding her maiden visit to America.

Sitharaman described her US visit as part of her endeavour to "take forward the bilateral defence cooperation".

Noting that the India-US relationship in defence has acquired the dimensions of a strategic partnership over the last decade, she said that the two countries have made considerable progress.

On board the US Guided Missile Destroyer USS Michael Murphy on 6 December 2018 at Joint Base Pearl Harbour Hickam, Hawaii. @USAmbIndia @IndianEmbassyUS @DefenceMinIndia pic.twitter.com/yXjzdsfFSc

Sitharaman capped off her trip with a visit to Hawaii, the headquarters of what early this year was rechristened as US Indo-Pacific Command.

"Our two democratic nations are committed to upholding a rules-based international order which has brought decades of peace, stability and prosperity. We are global partners on defence and security, and this exemplifies our mutual cooperation to assure a free and open Indo-Pacific," said US INDOPACOM Commander Admiral Phil Davidson.

US INDOPACOM, at the conclusion of Sitharaman's visit, said that this partnership was a reflection of the increasing strategic importance of the US-India security relationship and the progress both countries have made in advancing their defence cooperation.

The scope for mutual coordination and collaboration in the Indo-Pacific region continues to grow. Air forces of India and the US are currently conducting a 12-day military exercise in Kalaikunda and Panagarh air bases in West Bengal, with an aim to enhance operational coordination, Indian officials said.

The 'Ex Cope India-18' will be the fourth edition to the series of bilateral drills between the Indian Air Force and the US Air Force.

Meeting her American counterpart at the Pentagon on Monday, Sitharaman said the recent high-level meetings are an indication of the depth and quality of "our bilateral partnership, as well as our mutual desire" to work closely on a range of bilateral and global issues.

While no announcements were made with regard to shifting of F-16 production base to India or deals in armed drones, officials privy to the high-level talks said: "The US is leaning a way forward" in meeting India's needs and aspirations in the defence sector and is taking steps that would help it achieve its strategic goals.

There is a "mutual desire to move positively and quickly" in defence relationship, Sitharaman told reporters at the Pentagon on Monday, which was also her only media interaction during the visit.

Sitharaman, India's first woman defence minister, was accorded a red-carpet welcome during her maiden visit to the US in this capacity wherein she was given a rare look-in and briefing into the various aspects of US armed forces, defence industry and the ecosystem that the US has developed over the last few decades involving the military, strategic thinking community, research and industrial base.

In San Francisco, the hub of innovation and start-ups Sitharaman and her delegation was given an insight into the American defence research set-up and the best defence practices that can be adopted by India.

The current situation in the Indo-Pacific region was the topic of focus during Sitharaman's meetings with US leaders, besides which a wide range of issues was covered, including the situation in Afghanistan, Pakistan, recent developments in Sri Lanka, Maldives and quick coordination between the two powerful armies for peace purposes, officials said.

Issues like CAATSA and purchase of major defence equipment from Russia including S-400 did crop up during the meeting, but the Americans gave an impression that the Trump administration is "eager than ever" to enhance its defence trade and strategic ties with India.

While making it clear that India can buy weapons from any country it sees fit, the American leadership suggested the Asian nation to select the US over other countries.

Some of the existing rules, regulations and legislation have slowed the process of defence acquisition from the US, the Indian delegation said.

This was said despite major changes like India being accorded a 'major defence partner' status in 2016, placed in the STA-1 category this year and signing the Communications Compatibility and Security Agreement in September.

Given India's geographical location, its representatives said they were willing to place orders for the latest military hardware and technology and not for anything else.

The officials said India does not want simple defence trade as co-development and co-production need to be essential in the India-US defence relationship.

The US appeared on the same page but expressed their sense of frustration over India's defence procurement process.

China claims almost all of the resource-rich South China Sea and has also laid claims on the Senkaku islands under the control of Japan in the East China Sea.

Vietnam, the Philippines, Malaysia, Brunei and Taiwan have counterclaims over the South China Sea.

The US is periodically deploying its naval ships and fighter planes to assert freedom of navigation.