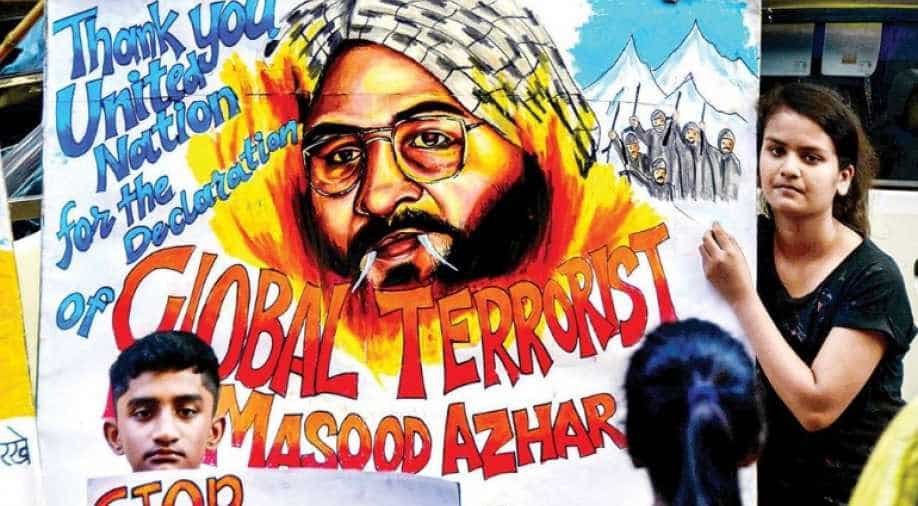 The United Nations designated Masood Azhar as a 'global terrorist' on May 1 after China lifted its hold on a proposal to blacklist the Pakistan-based Jaish-e-Mohammed chief. Photograph:( PTI )

Masood Azhar's listing shows that the international community can and will hold terrorists accountable for their actions.

The listing of Pakistan-based Jaish-e-Mohammed chief Masood Azhar as a global terrorist by the UN Security Council has been termed as a "significant achievement" by the member nations in holding perpetrators, organisers and sponsors of acts of terrorism accountable.

The 1267 Al Qaeda Sanctions Committee of the powerful Security Council blacklisted Azhar on May 1 after veto-wielding permanent member China lifted its technical hold on the proposal by the US, the UK and France to list him.

It was a huge victory for India after a decade of relentless efforts to ban the mastermind of several terror attacks against India, including the deadly Pulwama attack against Indian security forces. The listing subjects Azhar to an assets freeze travel ban and an arms embargo.

"We are pleased that this month, the 1267 Committee designated Masood Azhar, leader of Jaish-e-Mohammed, and ISIL-Khorasan, a dangerous ISIS affiliate operating in Afghanistan and Pakistan, for UN sanctions, Ambassador Jonathan Cohen, Acting Permanent Representative of the US to the United Nations said at a Security Council semi-annual briefing here Monday by Chairs of subsidiary bodies of the Security Council.

"Azhar's listing shows that the international community can and will hold terrorists accountable for their actions," he said.

Last week, the 1267 Sanctions Committee sanctioned ISIL-Khorasan, a terror group also known as 'ISIL's South Asia Branch', formed in 2015 by a former Tehrik-e-Taliban Pakistan commander, that has claimed responsibility for numerous attacks in Afghanistan and Pakistan.

"The designation of ISIS-Khorasan demonstrates the Committee's commitment to ensuring that ISIS affiliates do not take up the mantle of a diminished ISIS core. In this vein, it is important that the Committee designates other ISIS affiliates who seek to replicate the destructions wrought in Iraq and Syria in new corners of the world. We commend our Security Council colleagues for supporting these important designations, Cohen said.

Germany and Poland, who had also co-sponsored the proposal to blacklist the JeM chief, termed the listing of Azhar as a significant achievement by all members of the Security Council.

It was a good signal, a good sign for the work of this Committee that we were able earlier to have the listing of Masood Azhar. It was difficult for some but I think it was very important that we were able to overcome the obstacles, German Ambassador to the UN Christoph Heusgen said at the meeting.

Poland's Permanent Representative to the UN Joanna Wronecka, without naming Azhar, said that she would like to "underline a significant achievement made by all Security Council member states which allowed listing of a person responsible for a deadly terrorist attack in the state of Jammu and Kashmir," a reference to the Pulwama terror attacks masterminded by Azhar.

"We welcome the progress achieved and encourage all States to work together in order to hold perpetrators, organizers and sponsors of acts of terrorism accountable, she said.

He said that Beijing supports the 1267 Committee in working under Council mandates, closely communicating with the countries concerned and bolstering cooperation with regional and sub-regional counter-terrorism mechanisms with a view to making a greater contribution to international counter-terrorism efforts.

"We hope that the Committee's work such as listing, exemption and de-listing will strictly abide by the relevant Council resolutions and the norms guiding the work of the Committee, uphold the principle of objectivity, impartiality and professionalism and base its work on solid evidence and consensus among parties so as to safeguard the authority and effectiveness of the sanctions mechanism," he said.

Following the UNSC designation of Azhar, Foreign Ministry spokesman Geng Shuang had said in Beijing that China lifted the technical hold after it found no objection to the listing proposal following a careful study of the "revised materials."

Cohen added that 1267, 1373 and 1540 Committees play a crucial and complementary role in assessing and countering global threats and they are invaluable in the fight against terrorism. "ISIS and Al Qaida are dynamic organisations, evolving with the pressure the international community brings to bear on them. The 1267 Committee must continue to keep up its pace to adapt to the evolving threat, he said.

Azhar's listing came on the first day of Indonesia assuming the Presidency of the Council for this month.

Indonesia's Ambassador to the UN and Chair of the 1267 Committee Dian Triansyah Djani Dian, speaking in his national capacity at the Security Council briefing, said it must be acknowledged that there have been encouraging developments in advancing common goals with regards to the mandates of the three Committee.

India's Permanent Representative to the UN Ambassador Syed Akbaruddin had specifically thanked Djani for ensuring that the process went smoothly in his video statement issued after Azhar was listed by the Sanctions Committee.