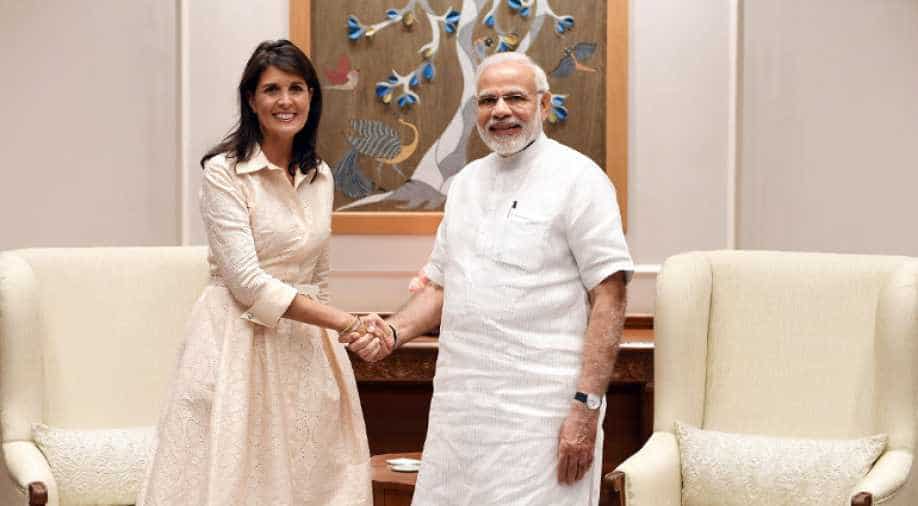 Hope the US will come together with allies and realize the opportunities that India has to offer, said Former US Ambassador Nikki Haley at the India Ideas Summit.

Indian American and Republican leader Nikki Haley has said that US President Donald Trump sees China as a threat and said that she would work very hard to get him re-elected in the November elections.

Addressing the concluding session of the two-day India Ideas Summit Haley said that “I think that (security threat from China) will be one factor (in the elections). I think that you have president Trump who very much sees China as a threat,.”

Former US Ambassador to the UN & Former Governor of South Carolina, Nikki Haley said, "The relationship between PM Modi and President Trump has strengthened, and it's important that we continue to take that relationship forward.

“I think that you have (Democratic nominee) Joe Biden, who has said that China is not the problem and who was against the travel ban to China and who has not shown, in any of his time that he was in the Obama administration, as realizing the threat that China had. So, I think it will be one of the factors that's going to be very important in this next election,” she said.

“I can tell you right now, I'm going to be campaigning and working very hard for president Trump. I think where we have come on foreign policy, where we saw the economy prior to COVID is very strong. I believe in the policies that he's put forward and I'll be campaigning hard for him and look forward to a win by president Trump in November,” she said.

“That was warranted. They are natural allies. India and the United States are a lot of the same values, the same work ethic, the same family values. It's important that we just continue to take that relationship forward,” she said.

“Everyone is going to start to look at India as they're looking at Vietnam and other places to see how they can get less dependent on China," she said.

“If India can make some concessions in order to bring all of this trade in, I think that there will be massive amounts, not just from the United States, but from other countries that really lean into India to try and do those things,” Haley said.