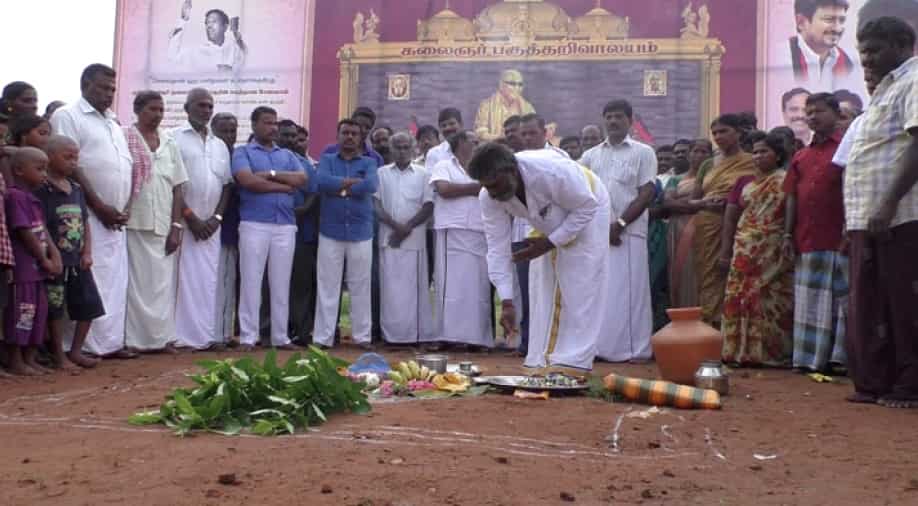 The groundbreaking (bhumi puja) ceremony being performed at the 10,000sqft site in kuchikadu village in TN's Namakkal District. Kuchikadu village is home to over 1000 families of the Arunthathiyar community (Courtesy -Special arrangement). Photograph:( WION )

Members of the Arunthathiyar community are behind the initiative of building the temple, which is to be constructed on a 10,000 square feet parcel of land at Kuchikadu village in Namakkal district of Tamil Nadu.

In about six months time, a ‘temple of rationality’ for Tamil Nadu’s former five-time chief minister M Karunanidhi, a self-proclaimed atheist, is expected to be ready, after the groundbreaking ceremony was performed last week.

Members of the Arunthathiyar community are behind the initiative of building the temple, which is to be constructed on a 10,000 square feet parcel of land at Kuchikadu village in Namakkal district of Tamil Nadu.

The community wishes to express their gratitude to the departed leader, whom they consider their God, for having provided their community reservation and other welfare schemes.

Speaking to WION, K Chinnasamy, Head of the Tamil Nadu Arunthathiyar Munnetra Peravai said, “Kalaignar Karunanidhi gave us 3 per cent reservation within the then existing 18 per cent reserved for Scheduled Castes. He deplored and tried to eradicate manual scavenging besides ensuring in Tamil Nadu people of any caste could become priests in the temples. We have pooled in money and resources from our community to construct this temple, while we have not approached other communities for donations, we would be willing to accept if they offer donations”.

The land acquired for the temple costs over 12 lakh Rupees and the temple is to be constructed at around 30 lakh Rupees. The members of the Arunthathiyar community that has over 1000 families living in the village also plan to have a library, garden and a community hall within the premises.

“Arunthathiyars were a very backward community living below the poverty line and were struggling economically and education-wise. In the last decade, the community has had over 200 doctors and thousands of engineers who have started serving, and they all benefited from the reservation. People from the community have made it to posts like deputy collectors, deputy registrars and also university professors. Kalaignar is a rationalist, but the Arunthathiyar community members are worshipers of Perumal (Krishna), so they wanted to show their gratitude to him by constructing a temple” former Deputy Speaker of Tamil Nadu Assembly and DMK Rajya Sabha MP VP Duraisamy told WION, when asked about the temple.

Villagers say that the groundbreaking ceremony or the ‘bhumi puja’ of the temple was attended by people from their community, irrespective of their different political affiliations and ideological beliefs.

“For someone who has fallen down, the person who picks him up is God. Our community was majorly involved in manual scavenging, and Kalaignar put an end to it. His schemes are God-like for us. While Karunanidhi himself was a rationalist, he didn’t object to other people worshipping. In DMK there are a lot of people who go to the temple and worship”, said DMK ward secretary, C Dhavamani, justifying a temple for a self-proclaimed rationalist.