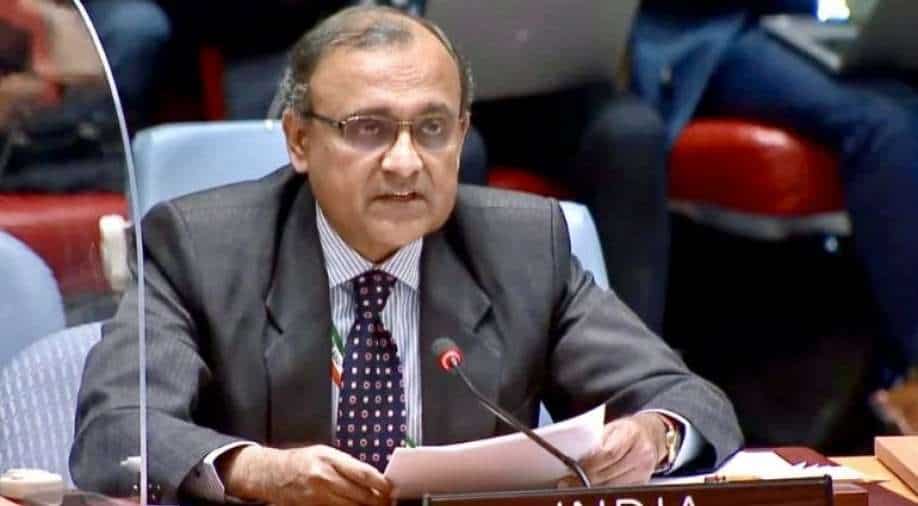 In this picture, Chairman of Taliban sanctions committee TS Tirumurti can be seen addressing a session Photograph:( WION )

Before the Taliban takeover of Afghanistan in August 2021, travel ban exemptions were given to Taliban leadership so that talks can be facilitated with the leadership of the Afghan republic

The chair of the Taliban sanctions committee, Indian envoy to UN TS Tirumurti has said that the Taliban gets the travel ban exemption as envisaged under the sanctions region only to attend peace talks.

On December 22, 2021, the committee had extended the three-month travel ban exemption for 14 listed Taliban members. The ban continues till March 22, 2022. The country which hosts the peace talks will be required to report to the committee within 30 days from the date of the travel. As part of the travel ban exemption, a limited asset freeze exemption was also given to finance the exempted travel.

The Taliban sanctions committee or the 1988 Security Council Committee lists three kinds of sanctions-- asset freeze, travel ban and arms embargo. Before the Taliban takeover of Afghanistan in August 2021, travel ban exemptions were given to Taliban leadership so that talks can be facilitated with the leadership of the Afghan republic.

On humanitarian assistance and the sanctions region, the chair pointed out that the "Security Council encourages humanitarian providers to use reasonable efforts to minimise" the "accrual of any benefits" whether its direct provision or diversion to "individuals or entities designated on the 1988 sanctions list.". Remember, over 30 listed members of the Taliban who are on the UN Sanctions list now occupy senior cabinet positions and with the world rushing to send support to Afghan people, fear is it might end up with the group.

Ambassador Tirumurti also pointed to the latest report the sanctions' monitoring team that "noted that the ties between the Taliban, largely through the Haqqani Network, and the Al-Qaida and foreign terrorist fighters remain close and are based on ideological alignment and relationships forged through common struggle and intermarriage."

Several countries have asked the Taliban to make sure Afghanistan doesn't become a terrorist safe haven, but so far, no concrete guarantees have be received.

He also warned on IS or the Islamic state's presence in the country, saying, "The continued presence of ISIL and its activities in Afghanistan remains a matter of our concern" and "terrorist attacks have become despicable acts used by this terrorist organization to demonstrate its power and influence in the country and abroad."

Indian envoy TS Tirumurti is the current chair of the committee till 31st December 2022. The Committee comprises all 15 members of the Security Council and makes its decision by consensus. It has two vice-chairs as well, Russia and UAE.

It came into existence in 2011 by splitting the 1267 sanctions regime and passage of resolution 1988. The Committee is mandated to oversee the implementation of the sanction's measures, designate individuals, remove the names on requests among others.