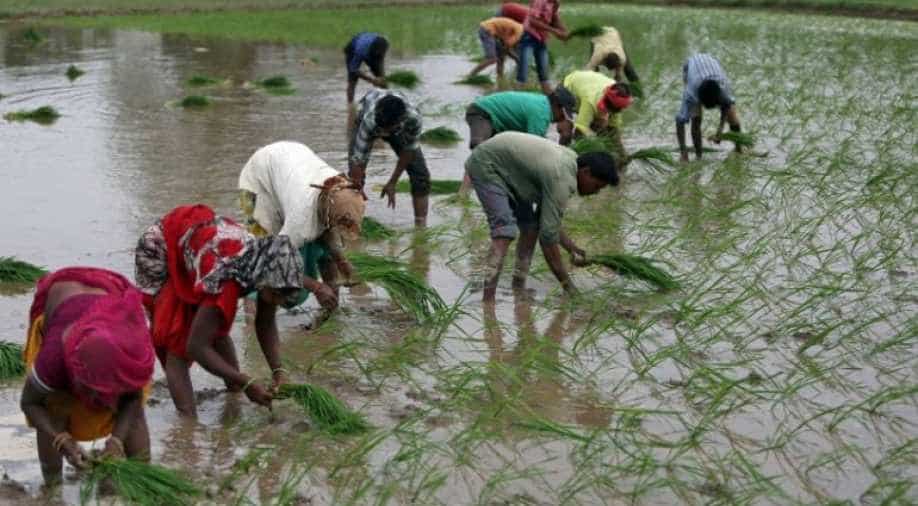 Farmers plant saplings in a rice field on the outskirts of Ahmedabad, India. Photograph:( Reuters )

Rice export prices in India extended gains this week helped by a stronger rupee, while expectations of fresh supplies entering the market weighed on Thai rates along with muted demand across major paddy-growing countries.

"The new crop is expected to start entering the market next month and this has driven the price down a little but the strong baht also means that the export price remains strong overall," a Bangkok-based rice trader said.

Thailand's rice exports fell by 12 per cent in the first half of 2019, hurt by the stronger baht, and will likely fall short of this year's target of 9.5 million tonnes, an exporter group said on Wednesday.

Thailand shipped 4.2 million tonnes of rice between January and June with orders in the last two months falling to as low as 600,000 tonnes per month, according to the Thai Rice Exporters Association.

The Indian rupee on Thursday rose to its highest level in 11-months, trimming exporters returns from overseas sales.

The Indian government has also raised the price at which it will buy new-season common rice varieties from local farmers by 3.7 percent.

Market insiders, however, said the move would not benefit most growers in dire need of cash, since they were compelled to sell their crop at much cheaper rates to millers or middlemen.

Bangladesh has also been unable to clinch deals since its ban on rice exports was lifted in May.

"Demand for 5% broken rice has been lacklustre this week," a trader based in Ho Chi Minh City said. "We have received orders for fragrant rice only."

Preliminary data showed nearly 60,000 tonnes of rice is to be loaded at Ho Chi Minh City ports during the July 1-16 period, compared with 311,700 tonnes in June, another trader said.

Most of the new shipments were headed to Iraq, Malaysia and West Africa, the trader added.