Sheikh Mujibur Rahman, one of the greatest leaders of subcontinent says PM Modi 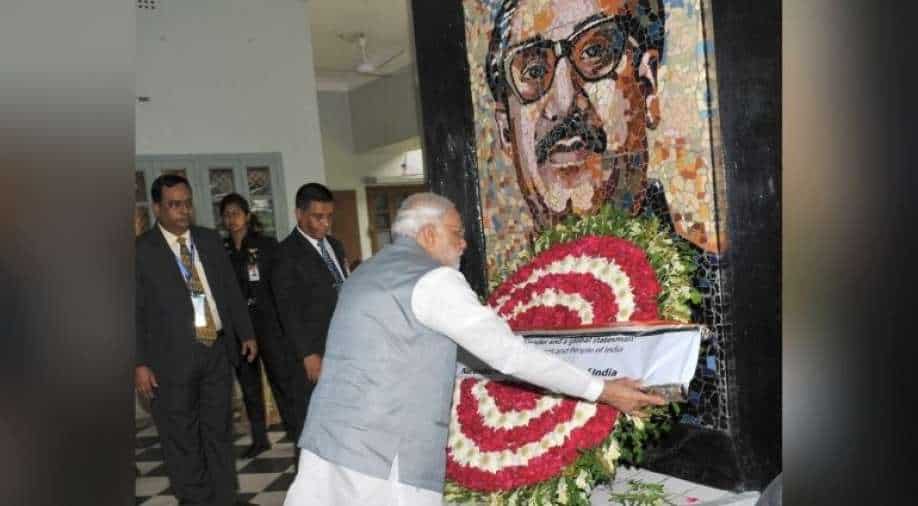 During his two-day visit to Bangladesh, PM Modi will visit the Tungipara village of Gopalganj District to pay homage at his mausoleum

Ahead of his Dhaka visit later this week, the Indian Prime Minister has called Bangladesh's father of nation Sheikh Mujibur Rahman as "one of the greatest leaders of our subcontinent".

In a tweet, PM Modi said, "He remains an icon of indomitable courage and the tireless struggle for his millions of admirers."

Bangabandhu's vision continues to light the India-Bangladesh friendship. I had the privilege of honouring his memory during my previous Bangladesh visit and will again pay homage to him, alongside PM Hasina, during the #MujibBorsho celebrations. https://t.co/5rFPCnlpVy pic.twitter.com/iS2wjPLIdo

During his two-day visit to Bangladesh, PM Modi will visit the Tungipara village of Gopalganj District to pay homage at his mausoleum. Tungipara is the birthplace of Sheikh Mujibur Rahman.

He will also inaugurate the Bangabandhu Bapu digital exhibition during his visit. Bangladesh is celebrating Mujib Barsho from 2020-21, the centennial birth anniversary of Bangabandhu.

This comes even as India conferred the prestigious Gandhi Peace Prize for 2020 on Bangabandhu. The Indian government in a release said, "The Gandhi Peace Prize recognizes the immense and unparalleled contribution of Bangabandhu Sheikh Mujibur Rahman in inspiring the liberation of Bangladesh, bringing stability to a nation born out of strife, laying the foundation for the close and fraternal relations between India and Bangladesh, and promoting peace and non-violence in the Indian subcontinent."

Bangladesh government was quick to express its "deep gratitude" to New Delhi's decision to confer the Gandhi Peace Prize 2020 to Bangabandhu.

The Bangladeshi foreign ministry in a statement said, "award is also a befitting tribute to the ever-deepening Bangladesh-India relations in a year when both countries are jointly celebrating the Golden Jubilee of Bangladesh’s Independence, 50 years of diplomatic relations and the birth centenary of Bangabandhu".