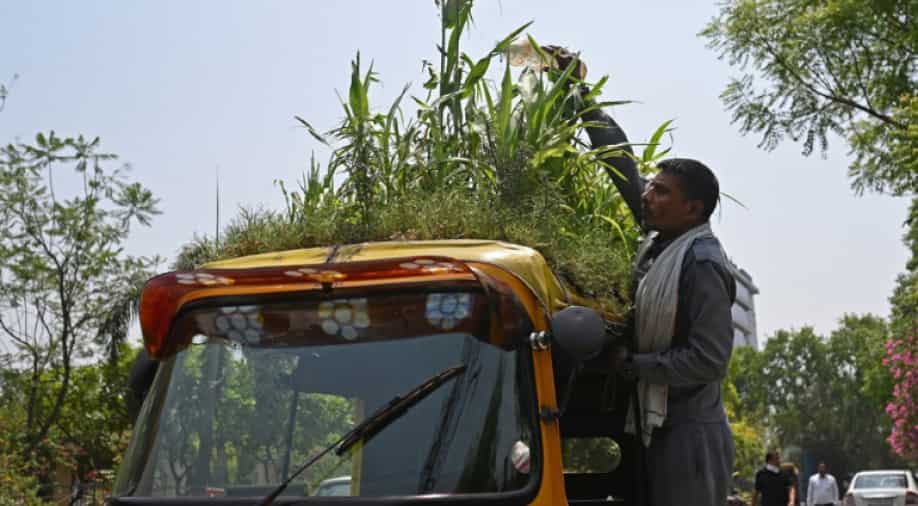 Mahendra Kumar, an autorickshaw driver in India's capital Delhi, has adopted a unique approach to keep his passengers cool.

Amid a searing summer season in the country, Kumar has set up a rooftop garden on the top of his autorickshaw.

India's Meteorological Department has warned about a heatwave across most parts of the north and said rainfall is expected in Delhi on May 3.

The 48-year-old's "moving garden" is attracting customers who stop and click pictures or shoot videos during their journey inside the autorickshaw.

In an interview with French news agency AFP, Kumar said "Around two years ago I had this idea during the peak of the summer season. I thought if I can grow some plants on the roof, it will keep my auto cool and give relief from the heat to my passengers."

Although yellow and green autorickshaws are ubiquitous on New Delhi's roads but Kumar's vehicle stands out as he has installed two mini coolers and fans inside.

Also see | What is a heatwave, how is it declared, and what are the many types of alerts in India?

Kumar, who is the father of three children, said he extra tips because of his fabulous customer service.

From shrubs to flowers, Kumar has grown a variety of 20 crops and believes he is doing his "own small bit" for the environment.

He acquired seeds from his acquaintances and roadside and planted them on his autorickshaw after putting a mat and some soil on its roof.

According to Kumar, his fellow drivers have been asking him for tips to impress customers.

Since 2010, more than 6,500 people have been killed by heatwaves in India. Climate change, which traps carbon dioxide in the atmosphere, is making them harsher and more frequent across South Asia.