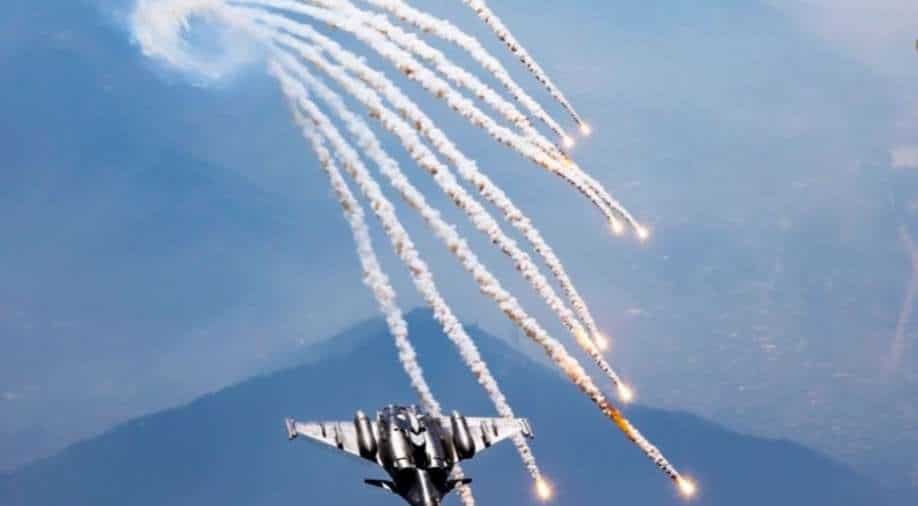 Republic Day 2022: Indian Air Force's might will be on display during the parade

Republic Day 2022 parade on New Delhi's Raj Path is going to be special. One of the main attraction of the annual program will be the largest fly-past ever. For the first time ever, the fly-past will include 75 planes/helicopters of the Indian Air Force that will fly in various formations. This year is marking `Azadi ka Amrit Mahotsav` or 75th year of Indian independence.

Vintage as well as current modern aircraft/helicopters like Rafale, Sukhoi, Jaguar, Mi-17, Sarang, Apache and Dakota, will display different formations, including Rahat, Meghna, Eklavya, Trishul, Tiranga, Vijay and Amrit. For the first time IAF has coordinated with Doordarshan to show cockpit videos during the fly-past

The parade will showcase India's military power and cultural diversity.

"Several firsts planned during the main parade include the launch of `Shaheedon Ko Shat Shat Naman` programme by National Cadet Corps, a grand flypast by 75 aircraft/helicopters of the Indian Air Force, cultural performances by 480 dancers, display of ten scrolls each of 75 metres prepared during the `Kala Kumbh` event," said India's defence ministry in an official statement.

The ministry said that, a drone show by 1,000 indigenously developed drones has also been planned for the `Beating the Retreat` ceremony, along with projection mapping.

Unfurling of the Indian flag

As per tradition, the National Flag will be unfurled followed by the National Anthem with a booming 21-gun salute. The parade will commence with President Ram Nath Kovind taking the salute.

The parade will be commanded by Parade Commander, Lieutenant General Vijay Kumar Mishra, Ati Vishisth Seva Medal, a second-generation Army officer. Major General Alok Kacker, Chief of Staff, Delhi Area will be the Parade Second-in-Command. A total of six marching contingents of the Indian Army will be present in the parade including the Rajput Regiment, the Assam Regiment, the Jammu & Kashmir Light Regiment, the Sikh Light Regiment, the Army Ordnance Corps and the Parachute Regiment.

"The Indian Army will be represented by a Mounted Column of 61 Cavalry, 14 Mechanised Columns, six marching contingents and a fly past by Advanced Light Helicopters (ALH) of Army Aviation. One Tank PT-76 and Centurion (On Tank Transporters) and two MBT Arjun MK-I, one APC TOPAS and BMP-I (On Tank Transporter) and Two BMP-II, one 75/24 Towed Gun (On Vehicle) and two Dhanush Gun System, one PMS Bridge and Two Sarvatra Bridge System, one HT-16 (On Vehicle) and two Tarang Shakti Electronic Warfare System, one Tiger Cat Missile & two Akash Missile System will be the main attraction in the mechanised columns," the statement further said.

Meanwhile, the Naval contingent will comprise of 96 young sailors and four officers led by Lt Cdr Aanchal Sharma as Contingent Commander. It will be followed by the Naval Tableau which is designed with the aim to showcase the multi-dimensional capabilities of the Indian Navy. The forward part of the tableau depicts the Naval Uprising of 1946, which contributed in India`s struggle for independence. The rear section illustrates the `Make in India` initiatives of the Indian Navy from 1983 to 2021. The model of New Vikrant with LCA Navy in air flanked by models of indigenously designed and built warships.

The frames on the sides of the trailer depict the construction of Indian Naval platforms in India.

The Indian Air Force contingent comprises of 96 airmen and four officers and will be led by Squadron Leader Prashant Swamyanathan. The Air Force tableau is titled `Indian Air Force, Transforming for the Future`.

The tableau showcases scaled down models of MiG-21, Gnat, Light Combat Helicopter and Rafale aircraft, as well as the Aslesha radar.

It will be followed by tableaux of 12 States/Union Territories and nine Ministries/Departments. The theme of tableaux of Arunachal Pradesh is Anglo-Abor (Adi) Wars; Haryana`s is Haryana: No 1 in Sports; Chattisgarh`s is 'Godhan Nyay Yojana: A new path to prosperity; Goa`s is 'Symbols of Goan heritage'; Gujarat's is 'Tribal Revolutionaries of Gujarat'; Jammu and Kashmir`s is 'Changing face of Jammu and Kashmir', among others.

The ceremony will culminate with the national anthem and the release of Tri-colour balloons.