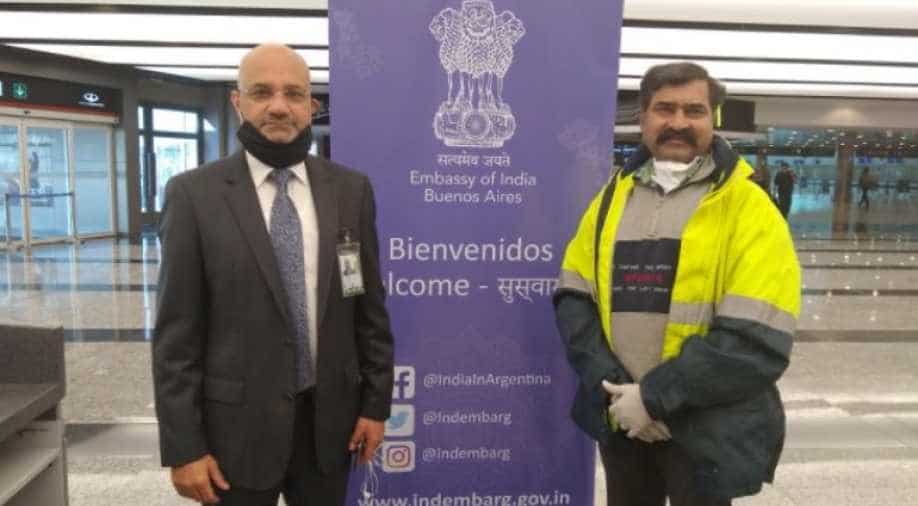 India's envoy to Argentina, Uruguay & Paraguay Dinesh Bhatia with a person who was sent back on the first flight to India from Buenos Aires on Monday Photograph:( WION )

India has started repatriating its citizens from far way Argentina with 24 Indians set to arrive in Delhi later this week even as New Delhi will be gifting medicines to Uruguay and Paraguay.

Speaking exclusively to our Principal Diplomatic Correspondent Sidhant Sibal from Buenos Aires, India's envoy to Argentina, Uruguay & Paraguay Dinesh Bhatia said EAM Jaishankar had "very productive and very fruitful" discussions with foreign ministers of all the 3 countries - Argentina, Uruguay and Paraguay on not only "cooperation in the times of COVID-19 but beyond that."

Interestingly, Argentina envoy to India Daniel Chuburu who was in Argentina for two months due to lockdown is coming to India in the first flight from Buenos Aires that left on Monday.

WION: How is the Indian Mission helping in getting citizens back?

Dinesh Bhatia: Argentina was the farthest country from India, there is a large enough community of Indians here, about a couple of thousand Indians in Argentina.

We have to work with stranded Indians in all the 3 countries and we have worked with and managed to send them back. We have a small number but a long stance and I hope they will reach safely.

There are two stops, the flight goes via Sydney and Bangkok and the journey is more than 30 hours and thanks to the leadership of our EAM Jaishanker and FS Harsh Shringla and the entire ministry who has supported us in organising flight back to India.

WION: How many Indian have registered from repatriation from all the 3 countries?

Dinesh Bhatia: We had our registration only from Argentina for more than 60 people who wanted to go back and another 20 people from Uruguay. From Uruguay, they have not been able to get out because all of them work for one particular company called TCS  and they decided not to go in this flight, but from Argentina when we circulated to all the 60 people who had registered and also to the larger community and we have 24 Indians going in this flight and one of them dropped out from this flight, unfortunately.

Twenty-four Indians are going back and surprisingly and interestingly Argentiain envoy to India, he was also in Argentina for the last two months, he was here for a family visit. He got stuck because of quarantine and lockdown in Argentina and India, he is also in this flight. He is going back to his workplace.

WION: Any Indian infect in all the 3 countries?

Dinesh Bhatia: Fortunately for us, no Indian has been infected in the 3 countries we deal with. The numbers are also not large and Uruguay has started improving because a number of recovered have been consistently more than infected on a daily basis since the 15th of last month. No Indians infected in the country.

WION: EAM spoke with Foreign Ministers of the countries, what was the key focus?

Dinesh Bhatia: EAM has spoken to foreign ministers of all the 3 countries--Argentina, Uruguay and Paraguay. Discussions were very productive and very fruitful because they not only discussed cooperation in the times of COVID, beyond that.

EAM also committed gift medicines and medical supplies to Uruguay and Paraguay and currently, they are being procured and sent to both countries.

All the three countries have close relations with India and since we sit in Buenos aires, we will talk about the country.

Argentina has a new government since December, this was this is the first conversation between the two FMs and the same thing applies to Uruguay because they had new govt which took over. They had elections in October and November and govt took over on March 1 and EAM spoke to his counterpart in Uruguay too and all the discussions were productive.

WION: How has been the ground situation in the 3 countries?

Dinesh Bhatia: The number in all these 3 countries have not been very large and Argentina and Paraguay have been in complete lockdown since March.

In fact, Argentina was the first country to declare lockdown since 20th March and they will continue for some more time. Paraguay same situation.

Uruguay has opened up, in fact, schools in the rural areas have also opened. They were never under complete lockdown as such, the numbers were very small, a small country with 3.5 million people and numbers have been small. Uruguay is gradually opening-up becoming back to normal.

Argentina will continue till numbers are in control because so far the numbers have been increasing.