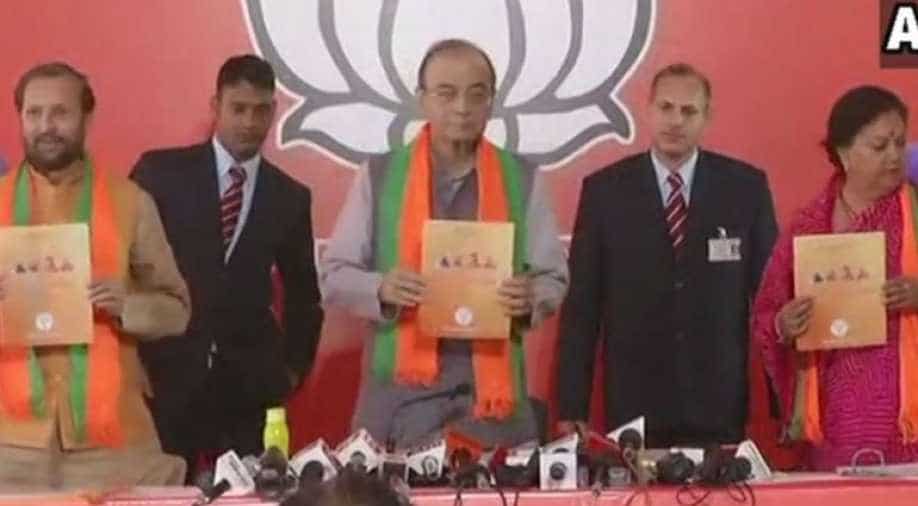 Incumbent chief minister Vasundhara Raje is set to challenge anti-incumbency, she is BJP's chief ministerial candidate this term as well.

The Bharatiya Janata Party on Tuesday released its manifesto for poll-bound state Rajasthan. Union Finance Minister Arun Jaitley released the script of party's agenda for the state if it comes to power this December. Union Minister Prakash Javadekar and incumbent Rajasthan Chief Minister Vasundhara Raje were also present on the occasion.

The party leaders said that the BJP had met 95 per cent of the promises it had made in 2013.

"The overall completion is 95 per cent," Raje said.

She also highlighted several points of the 2018 manifesto, saying 50 lakh jobs will be created in private sector in next five years in Rajasthan and every year, 30,000 jobs will be given in the government sector, news agency PTI reported.

The chief minister also said up to Rs 5,000 per month will be given as unemployment allowance to eligible youths above the age of 21 years.

The saffron party in its manifesto for Madhya Pradesh promised 10 lakh jobs per year to youths and welfare of all sections of society, among the other major promises made for the November 28.

For Chhattisgarh, the party, in its manifesto, promised to build a film city in the state and journalist welfare board. BJP chief Amit Shah also assured that the BJP government will provide loans up to 2 lakh without interest to women for starting their business in Chattisgarh.

Rajasthan is set to go to polls on December, the votes will counted on December 11.

Rajasthan Chief Minister Vasundhara Raje is set to challenge anti-incumbency, she is BJP's chief ministerial candidate this term as well. Congress, on the other hand,  has many chief ministerial aspirants in Rajasthan, former CM Ashok Gehlot and young leader Sachin Pilot are in the fight for the top office.