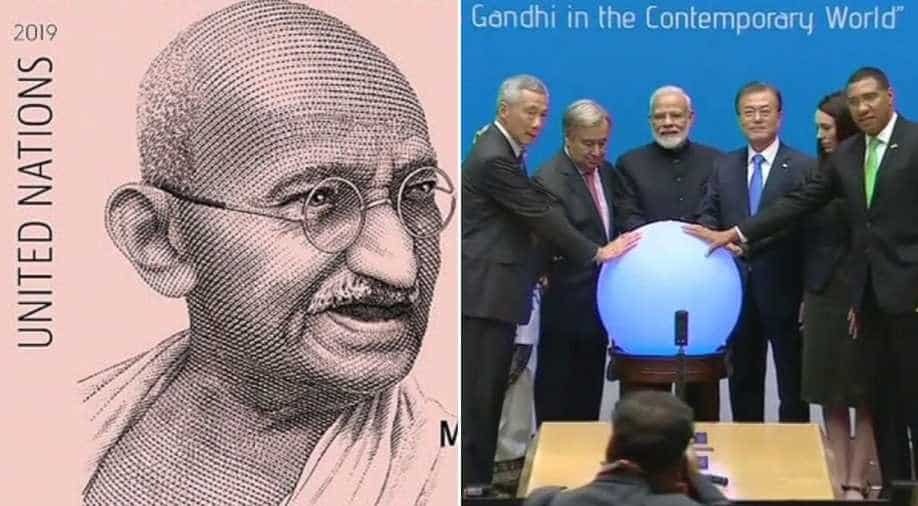 Prime Minister Narendra Modi inaugurated a 50 kilowatt 'Gandhi Solar Park' at the Headquarters of the United Nations in New York, US on Tuesday.

Among the leaders who were also present at the inauguration includes, Bangladesh Prime Minister Sheikh Hasina, President of South Korea Moon-Jae-in and UN Secretary-General Antonio Guterres.

USA: Prime Minister Narendra Modi and other leaders also launched a United Nations (UN) postage stamp of Mahatma Gandhi, at the programme 'Relevance of Mahatma Gandhi in the Contemporary World' at the UN headquarters. https://t.co/uNJaOBT4oo pic.twitter.com/ns8OZEVMBq

The event was organised to celebrate the 150th Birth Anniversary of Mahatma Gandhi, which will underline the continuing relevance of Gandhian thoughts and values in today's world.

"I'm extremely grateful to the United Nations (UN) for this programme and issuing a special commemorative stamp to mark the 150th birth anniversary of Mahatma Gandhi," PM Modi said while speaking at the UN program.

"Gandhi ji inspired the lives of those who never ever met him. Martin Luther King Junior and Nelson Mandela's policies and ideologies were based on Mahatma Gandhi's vision," PM Modi also said, adding, "he never tried to create influence through his life but it became a source of inspiration."

"We are living in the era of 'how to impress' but Gandhi ji's vision was 'how to inspire'," PM added.

"Gandhi ji was a true patriot, statesman and a saint. He dedicated his life for humankind, he was a beacon of hope and light in darkness," she said.

Prime Minister Modi is also scheduled to inaugurate a Gandhi Peace Garden at the State University of New York Campus at Old Westbury in Long Island where 150 trees have been planted in honour of Gandhi's 150th birth anniversary.

Previously, PM Modi has held several bilateral and multilateral meetings with leaders from other countries and UN entities on the margins of the UN General Assembly.

Earlier in the day, PM Modi held a bilateral meet with US President Donald Trump during which both leaders discussed issues ranging from terrorism to trade.

Speaking with reporters after the bilateral meet, US President said India and US will have a trade deal ''very soon''.

During the meet, Trump hailed PM Modi as a great leader and described him as ''Elvis of India'', referring to famous American singer and actor while PM Modi gave a framed photo from the mega 'Howdy, Modi' event to the US president.