While I want to eliminate terror, opposition is conspiring to finish me: PM Modi during Sankalp rally in Patna 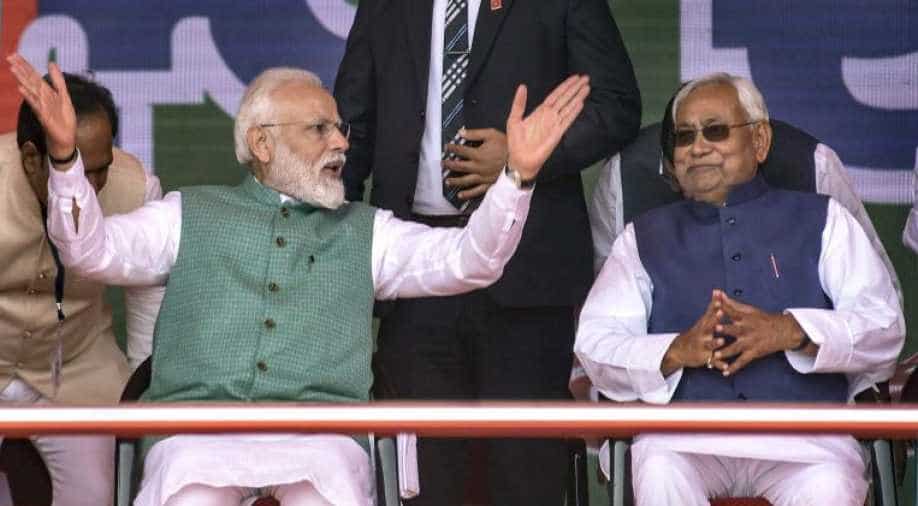 Prime Minister Narendra Modi on Sunday addressed NDA's Sankalp rally at Patna's Gandhi Maidan in Bihar. The Prime Minister started his address by paying homage to the martyrs of the Pulwama terror attack. He said that the "new India" will not tolerate the killings of its jawaans.

"I salute the martyrs of Pulwama, and the sons of Bihar who laid their lives down for the country. The whole nation is with the families of the jawans," he stated.

PM Modi slammed the Congress and its allies, accusing them of making statements that "demoralises our security forces".

"Why are they giving statements which are benefitting our enemies?" he asked.

"While I want to eliminate terror, opposition parties are conspiring to finish me," he noted.

PM Narendra Modi in Patna: I salute the martyrs of #Pulwama, the whole nation is standing with the families of the jawans pic.twitter.com/p8wDSGtPUx

During the rally, the Prime Minister took a jibe at those who criticise him and call him 'Chowkidar'. He said that "this chowkidar will always be alert" for the service of the nation. He also told the people of Bihar that the BJP government "dared to end the culture of corruption and middlemen which had been a normal practice in the country for decades."

PM Narendra Modi in Patna: These days a competition is underway to abuse the 'Chowkidaar', but you be assured, this 'Chowkidaar' of yours is as alert as ever. pic.twitter.com/uK1iNR0nuw

"The way investigations have been done against the perpetrators of terror is commendable, also the way they got our pilot back," the Bihar CM stated.

The Sankalp rally is aimed at taking a resolve to make a new and secure India under the leadership of PM Modi, BJP General Secretary Bhupendra Yadav said Saturday. The rally sounded the bugle for NDA's Lok Sabha election campaign.

Workers and leaders of all the three NDA constituents - BJP, JD(U) and LJP- worked tirelessly to make the rally a grand success, Yadav said on Saturday.