PM Modi arrives in Jammu and Kashmir on day-long visit 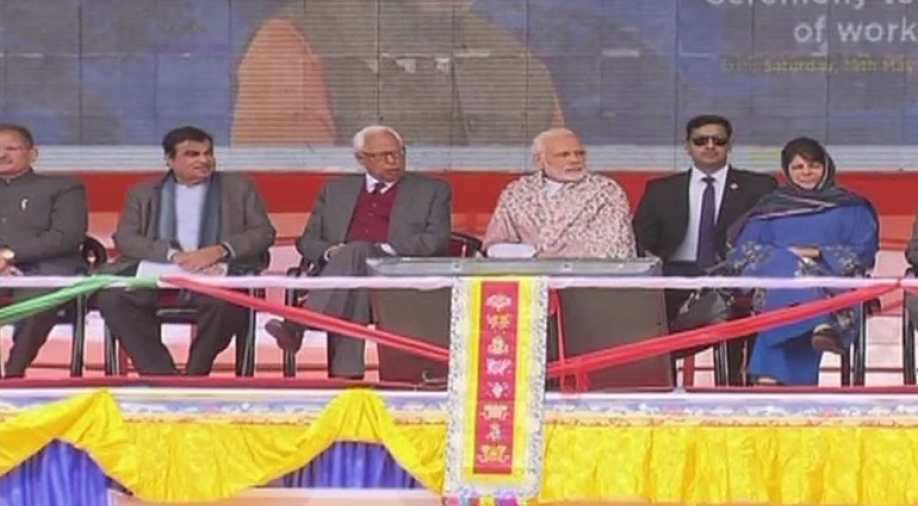 Prime Minister Narendra Modi arrived in Leh on Saturday morning on his day-long visit to Jammu and Kashmir, the first after the Centre announced the suspension of operations against terror groups during the holy month of Ramzan.

This is his second visit to Leh, a Himalayan town sharing the border with Pakistan and China and located 450 km north of the state's summer capital city of Srinagar. He had visited here on August 12, 2014, and inaugurated a hydel power project.

After reaching the airport, the prime minister stopped on the road and met people who had come to welcome him.

"I thank the wonderful people of Leh for the warm welcome. I am delighted to be here,"&nbsphe tweeted

The prime minister will participate in the closing ceremony of the 100th birth anniversary of the 19th Kushak Bakula Rinpoche.

Bakula was seen as the force behind several political agitations in the region and was its voice all over the world. He was born in Matho on May 21, 1917, and educated at Geshes, Lhasa (Tibet). A scholar of the Mahayana school of Buddhism, he was head priest of the Spituk Gompa. He died in 2003.

Bakula Rinpoche served the state and nation as he was elected as the member of legislative assembly of Jammu and Kashmir in 1951. He became a minister in the then state government.

He was elected as Member of Parliament representing Ladakh for two consecutive terms -- 1967 and 1971. During 1962 Sino-Indian war, he had allowed the Army to convert a section of his Pethub Monastery into a makeshift military hospital.

In 1989, he was appointed as India's ambassador to Mongolia which made him the first and only Monk diplomat in the world.

Over a period of ten years, he helped reopen ancient monasteries, organise Buddhist peace conferences and re-established Buddhism. Under his guidance, Pethub Monastery and Dechen Ling Nunnery in Ulaanbaatar developed into important centres of learning for the Mongolian Buddhists.

His services in Mongolia were deeply appreciated and he is fondly remembered as 'Elchin Bagsh' (ambassador-teacher). In 2001, he was conferred the Polar Star award, Mongolia's second-highest civilian award. The Pethub Stangey Choskhor Ling Monastery was also built at Ulaanbaatar.

Former governor S K Sinha had renamed Leh airport as Kushok Bakula Rimpochee Airport as his Spituk Monastery was in the vicinity of the airfield.

At the same event, Modi will unveil a plaque to mark the commencement of work on the Zojila tunnel, which will provide all-weather connectivity to this region.

The Cabinet Committee on Economic Affairs, chaired by the prime minister, had approved the construction, operation and maintenance of this tunnel between Baltal and Minamarg, on the Srinagar-Leh section at a total cost of Rs 6,800 crore earlier this year.

The construction of this tunnel will provide all-weather connectivity between Srinagar, Kargil and Leh and will lead to all-round economic and socio-cultural integration of these regions.

The road remains cut off from November to March due to heavy snowfall, landslides and avalanches. Normally, it takes around four hours to drive through the mountainous 9 km through Zoji La but after the construction of tunnel, which is likely to be completed in 2026, it will take only 15 minutes.