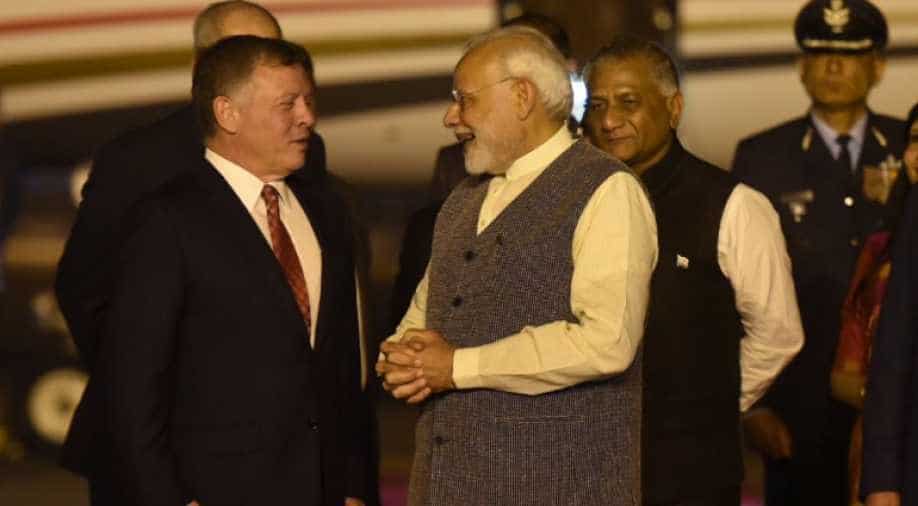 Now that the brouhaha is over, and we have seen the back of three quick-succession foreign dignitaries – Justin Trudeau’s seven-day jaunt through India, King Abdullah’s three-day sojourn, followed by a low key “India’s look East visit” by the Vietnamese Premier. Delhi definitely seems to be the flavour of the day!

A new dimension has been added to diplomatic greetings – effusiveness and tightness of the jhappi-pappi (hugs and greetings) dictates the importance of the dignitary, rather than the level of courtesy extended during arrival dignitary. Jhappi-pappi, even when clearly the other person is cringing (in western culture such familiarity borders on transgression of personal space) is the order of the day. An arm's length handshake and a hello will do – thank you! Trudeau’s reception did not even merit a junior minister of state, leave aside the EAM – nor, to my knowledge was there any jhappi-pappi; so, there you have it. King Abdullah was given a major bear hug, indicating his importance, while the diminutive Vietnamese Premier merited only a handshake.

So, what exactly do we read out of the visit of the Jordanian King? Visits by the heads of state and premiers of countries are not trifling matters and are meant to promote national interests, with an exchange of far-ranging and important treaties. But once in a while such visits could land up promoting personal interests of a powerful leader, under the dictum "L'État, c'est moi" (I am the State, and State is I) – a distinct possibility in a one-man state, like what we are witnessing in China, and certainly a dangerous trend. Is India on the same path?

One is confused as to what importance to accord to the Kings visit – while a well-meaning person, he is a lightweight in Middle East affairs, holds limited influence to support India in the OIC, and has little say over the Palestine-Israeli equation. Indeed the territorial and jurisdictional influence of the Hashemite is perhaps the lowest in history; West Bank was ceded to the Palestinians, and Jerusalem and its holy sites of the Jews, Christians and Muslims, were usurped by Israel. Thus, Jordan’s support hardly furthers India’s national interests. Perhaps, visits by King Salman of Saudi Arabia, President Sisi of Egypt, or President Erdogan of Turkey, would have been more meaningful. The only other major player we managed to pull in, was President Rouhani of Iran. On the contrary, Canada is a permanent member of the NSG and could have helped us in nuclear fuel supply situation; besides, India has a number of issues relating to Khalistani separatists, and issues of visas to Indian retired official etc. These were far more important.

So why sign eleven agreements with Jordan, that too insignificant ones on defence cooperation, cultural, economic and miscellaneous matters. None of these will have a major impact either way, for India or for Jordan. Jordan hardly has a standing Defence Force (just 111,000 personnel, the equivalent of one corps of our army), with a total budget of some USD 2.5 billion dollars. The 'Defence Agreement' is meaningless, and all the other ten would ordinarily be concluded at the foreign secretary level, or at the most with the EAM. So what exactly was the purpose of the visit?

It was interesting, therefore, to see acrobatic somersaults and chameleonic deftness on the issue of Islam and terrorism. Prime Minister Modi who was hesitant to even don the Muslim skull cap (Taqiyah) when felicitated by a Maulana in 2011, was now pontificating on values of Islam and that fight against terror is not against Muslims. Be that as it may, it becomes clear that politicians can adopt any strategy and go to any length for garnering political mileage. One good thing is, that he has now committed publicly, that India’s progress cannot and must not exclude a major element of the population. King Abdullah’s visit, his speech (and of the PM) at the Islamic centre to members of the Muslim community, was (to my mind) meant to establish a bridge with the community through a Muslim plenipotentiary; a bridge the PM needs to desperately establish before the 2019 general elections.

The invitation was obviously not for India to get a foothold in Palestinian-Israeli affairs since far too many leaders have burnt their fingers trying to resolve this vexed question. So, other probabilities were; one, to garner support for India’s bid for a UN seat; and two, buttress the PM's bid for a Noble Prize as a statesman of repute. Latter may seem outlandish, but not long ago, while meeting some diplomats, I asked how the outside world viewed NaMo, despite our internal travails, and his silence on these grave matters. The diplomats’ view was revealing; “Modi has an agenda, and a focus on being recognized in history as a modern-day Gandhi and maker of the new India – he is ambitious and clever and will go to any ends to achieve his aims”.

This seems to fit since King Abdullah is known to be leading voice on modernisation and de-radicalisation in Islam. It coincides with NaMo’s often-repeated theme of terrorism and radicalism being the biggest challenges faced by the world today. It sort of helped by media announcing that King Abdullah II was a direct descendant of Prophet Muhammad (PBUH) – which he is not – and that he is also custodian of the holy sites in Mecca-Medina and Jerusalem - which again he is not, since 1925 and 1967 respectively, except perhaps in name for the Jerusalem sites.

Amusing to see our media’s skewed interpretation of history, in averring the direct descendant of Prophet Muhammad (PBUH). This is far from the truth and seems to be for domestic Muslim consumption. From my knowledge of Islamic history, while both Prophet Muhammad (PBUH) and King Abdulah II were from the Bannu Hashem clan of the Quraysh tribe, like our gotra system under a Khap (tribe), that is the limit of the association. The King is a Sunni, whereas lineal descendant is claimed by the Shia’s, followers of Imam Hussein (the Prophets grandson). Abdullah II rightly traces his lineage as a Sharif (caretaker of the holy sites) through unbroken succession from 1101 to 1925 but is technically not a descendant.

Prophet Muhammad (PBUH) had three sons, but all died in childhood. His lineage passed on through his daughter, Fatima, married to Ali-bin Abu Talib (Prophets first cousin and son-in-law by marriage). Ali and Fatima’s two sons, Hassan (the elder child) and Hussein (the younger child) were martyred along with his entire family at the battle of Karbala. What is historically known as the lineal descendants of the Prophet, if existing, are only through this lineage.

What the future holds for India’s diplomatic foray into the Mid-East, through this subtle entry, remains to be seen. But, one thing is certain, PM Modi is casting his net wide. Now whether this is in pursuit of national interests or his own, only time will tell.